I have been a practising politician and a mediaperson for far too long. I have gathered the experience of 14 years as a parliamentarian and have led a media house for 40 years now. I am fully aware of the price you have to pay, even when you inadvertently land yourself into situations that can be fully exploited by others. I am also aware that both the media and the politicians are always poised to attack their prey when they find him in a weak moment.

Given the circumstances that obtained around that time, I should not have been present to receive the Tarun Kranti Puraskar-2012 being conferred by Tarun Award Council on July 29. Along with yoga guru Baba Ramdev, and the Jain International Trade Organisation (JITO), I was one of the recipients.

I was honoured for my contribution to the society through positive media activities and in an individual capacity. My revered mother Matoshri Veenadevi Darda had passed away, and I was in the mourning period. But then Rashtrasant Shri Tarunsagarji Maharaj who helped me a lot to overcome my grief, persuaded me and as I believe in principle of Jainism, I could not say no to him. His suggestion that this was an apolitical religious forum was persuasive, and I felt that may be I could also get some solace from his blessings in this mourning period.

Now it is customary to use somewhat lavish sounding expressions at such apolitical occasions when you describe others. These words are not to be taken literally, and the religious audiences appreciate that spirit. So, when I was addressing the audience, I described all four of us — Shri Tarunsagarji, Baba Ramdev, Gujarat chief minister Narendra Modi, and even myself as ‘saints’. I also classified each as a religious saint, a yoga saint, a political saint and a media saint respectively. In Hindi I used the expression “rajkiya” (political) for Modi. Now surely, this is not an expression to be taken literally.

In a similar vein, while making such speeches you use expressions that elevate the hosts without being too literal.

So, Gujarat being famous for its Gir lions, I also described Modi as a ‘lion’. The metaphor is well-used and its meaning is also implicit. It is someone who inspires fear in others. Modi has clearly terrorised the BJP leadership and the Sangh Parivar into submission, and the message was loud and clear. When I was using these expressions, it was at the back of my mind that this is an apolitical forum, and all the others would also adhere to this code.

However, it is naive to expect that public figures would follow such a code. They are guided more by issues like media mileage, and once they have the attention of a captive audience and a horde of 24×7 television cameras, then they get into their own. Being one among the media, I am also aware the media does not have as much inclination towards social issues as it has for sensationalism. Obtaining higher TRP is their objective. However, I myself had a painful experience of how simple statements are stretched and given a completely different colour by the media.

I got ample hints of what was in store for me, when Baba Ramdev took the floor and launched his by now familiar tirade on corruption and black money. I shared my discomfort with Modi who was seated next to me, but he simply brushed aside my concerns. “Just wait for me, this is an election year, and I have a job to do,” he said. By now, I knew what was to be unloaded.

Modi is a master media manipulator. He quickly seized the opportunity, and virtually fed the story line to the waiting television cameras. Apparently sympathising with me for the flak that I would be getting from the Congress leadership for having ‘praised’ him, he actually provoked the media to toe this line. He was only exploiting the non-political opening that had come his way for his political gains. The media swallowed his bait, hook, line and sinker. The story was breaking news all over.

Had it even been factually correct, there would have been no issues. But then there was gross distortion. I never described Modi as a national saint, nor did I ever appreciate his development track record. The expression ‘rajkiya’ was quickly distorted into ‘rashtriya’, and when I clarified, an impression was created that I was eating my words. Far from it, I was only putting the record straight. It was not an embarrassment just for me, but even for the organisers. They later wrote to me expressing their concern about the turn of the events, and even suggested that they would take care in future to ensure that their forum does not become a platform for such political manipulation.

Ever since that event, I have been reflecting on this trend in the media and the public figures. This moment of so-called glory on the television screen and its exceedingly short shelf life in public memory leaves a lasting toll on the credibility of the entire public discourse. Public opinion is mature enough not to draw unnecessary conclusions on simple statements made to fit an occasion. Since childhood, I myself have grown up in an atmosphere which fosters secularism. Those who know me and my convictions are fully aware that for me, Modi is no lion, nor do I have any regard for his track record as a chief minister.

I had sharply criticised Modi’s role in fomenting communal tension during and after Godhra carnage in 2002 in the Rajya Sabha in the presence of the then prime minister Atal Behari Vajpayee. If anything, my speech in the Rajya Sabha during the debate on the post-Godhra communal carnage aptly sums up my opinion about him as a person who was fondly named Narendra by his parents so that he would follow the footsteps of Swami Vivekananda, but who has degenerated to such an extent that he has become a blood thirsty monster. All this was conveniently forgotten when media distorted and misinterpreted my statements on a non-political forum. Neither are the people of Gujarat or elsewhere going to be swayed by the frenzy that had gripped the media following this event. As a reader, citizen, political worker and a media head, the incident has left me disturbed.

Gujarat has given not just to the nation, but to the entire world such great visionaries like Mahatma Gandhi and Sardar Vallabhbhai Patel, who have tremendously influenced the society. The society too considers such influence as supreme and knows which ones to discard and which ones to adopt.

Saints like Shri Tarunsagarji, who wield a dominating influence on the minds of the people, would become more averse to such public figures, and the media in general. As a ‘victim,’ I am not in a position to make any comments on the various aspects involved in this episode, but then the lessons are too obvious for all thinking persons and no one can even afford to miss their significance. 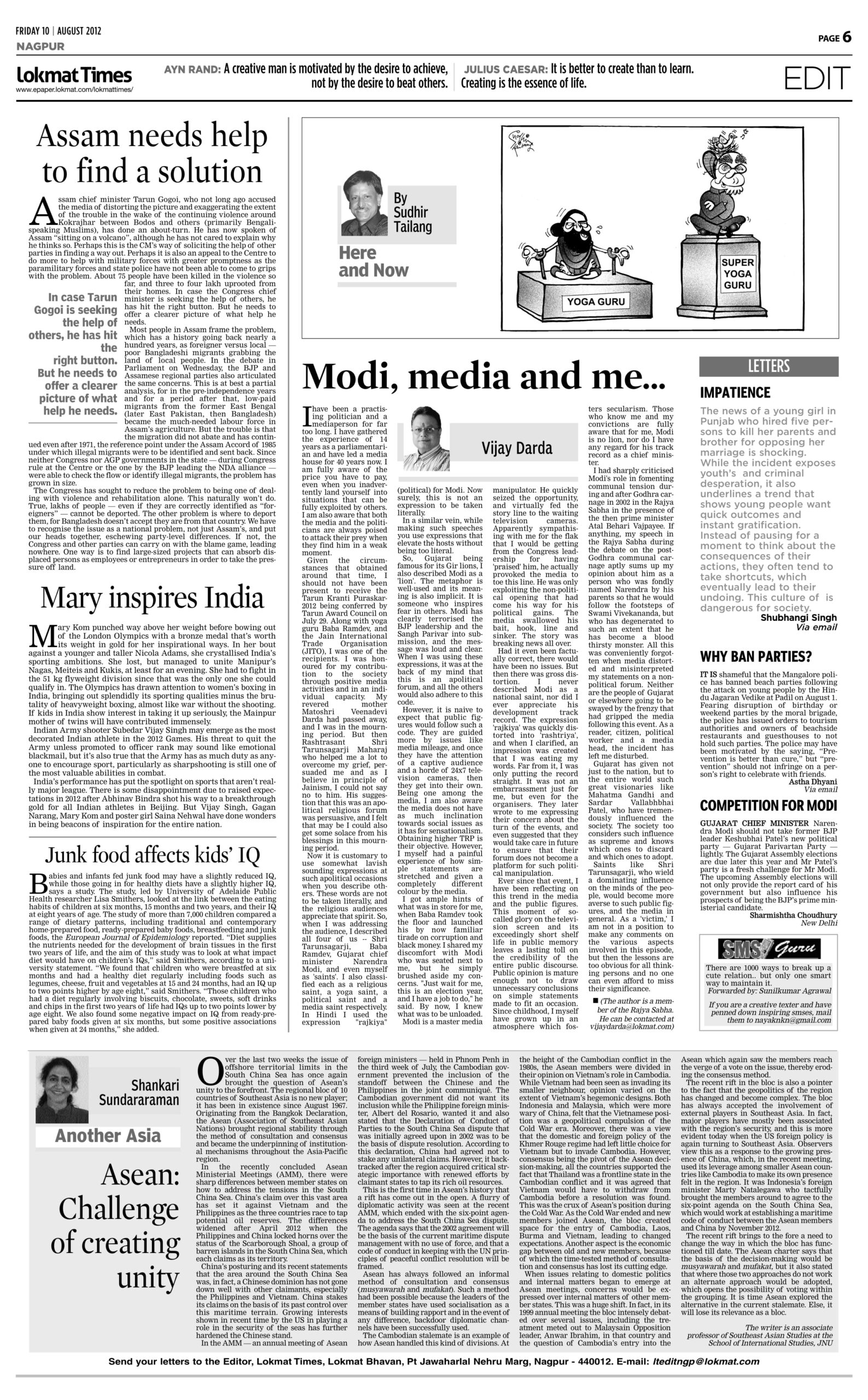