Let me tell you a story of Mukesh Ambani’s vision. Reliance Group has a huge petroleum refinery in Jamnagar, Gujarat. A large area was lying barren around it. Mukesh Ambani felt that if trees and plants are planted on this land, the pollution of the refinery can be absorbed. When Mukesh Ambani decided to plant mango orchard on 600 acres of barren land, people harboured serious reservations about the success of his project.

The soil of Jamnagar and the moisture there has salinity and the winds blow at a high velocity too. In such a situation, would it be right to plant a mango orchard? This was the question in everyone’s mind, but Mukesh Ambani had decided and insisted that only mango orchard would be planted there. That was in 1997. Today, after 23 years, the salinity of the soil has been controlled, the winds have been taken care of and there are more than 1.5 lakh mango trees of about 200 species. Mangoes from this orchard are being exported all over the world because of its unmatched quality. The name of this mango orchard in Jamnagar is ‘Dhirubhai Ambani Lakhibag Amrayee’. For your information, let me tell you that the word ‘Lakhibag’ was the name of a mango grove developed by Mughal Emperor Akbar near Darbhanga in Bihar.

I told you this story so that you can understand how important it is to have vision, devotion and dedication to your work to become rich. After all, Dhirubhai Ambani started his journey from zero and built a big empire on his own. After that, one of his two sons raised his empire and the other collapsed on the ground. It is clear from this that even if you get a huge wealth by luck, you do not necessarily climb the stairs of success. It takes strength, concentration and balance to climb. Just one mistake is enough to fall! Let’s just think of Tata-Birla, Ambani-Adani, Hinduja, L N Mittal or Sajjan Jindal, Singhania, Anand Mahindra, you will find that their family started from zero. Infosys is an excellent example of our times. Narayan Murthy had laid the foundation of Infosys with a capital of only Rs 10,000. Adani started from the very bottom. Today, their success stories are for all to see. It is obvious that all this does not happen by sheer luck. For this, action and vision are required.

Many people continue to criticise industrial and business groups indiscriminately. Be it Ambani group or Adani group or someone else. People do not miss any chance to say that the government has always been ‘favourable’ to them. To me, these are all stupid and meaningless outpouring. No one can become ‘Kuber’ only with ‘favours’. For that, capacity needs to be increased manifold. Do not discuss what kind of house Ambani lives in, by which aircraft he travels, how many vehicles he has and how the wedding took place in his house. If at all, discuss that Ambani has given work to millions of hands. India has advanced in the world of technology. Do you know that while some people swindled Rs 15 lakh crore of the banks, Mukesh Ambani does not owe a single rupee to any bank! Consider why Mukesh Ambani flourishes in every sector he enters? Be thankful to all these industrialists that they have played and are playing an important role in the country’s progress. When I see the tricolour waving at The Pierre, a Taj Hotel in New York, my chest swells with pride. Isn’t it a matter of pride that Tata bought a global brand like Land Rover?

I have close proximity to almost all the industrialists I am referring to here and I know their lifestyle very closely. Humility, spontaneity and focus are their greatest assets. They have not become rich in a day. They have achieved this position through hard work. Therefore, do not curse poverty. Poverty is not a curse at all. Poverty can be transformed into prosperity by sterling actions and efforts. I know hundreds of such administrative officers who were born in a poor family but are occupying high posts today. Babasaheb Ambedkar was also poor but due to his talent, he is remembered with reverence all over the world today.

Our former President APJ Abdul Kalam is the biggest example of this. His father was a fisherman and Kalam used to sell ‘beedis’ as a child. He became the best scientist in the world and also adorned the country’s highest position. Lal Bahadur Shastri rose from poverty to become the Prime Minister of the country. M S Kannamwar who once sold newspapers, became the chief minister of Maharashtra. People like Jeff Bezos, Bill Gates, Elon Musk, Mark Zuckerberg have also risen from the state of extreme poverty to reach the summit. Former presidents of America, Bill Clinton or Barack Obama, hailed from very humble origins. Elsewhere across the world, there have been many prime ministers, presidents, industrialists, great writers and scientists who were born poor, but they overcame their poverty through their ability and reached the top. So don’t accept poverty as a curse, take your steps, develop your potential. Success is waiting for you! The need of the hour is dedication, out-of-the-box thinking and perseverance… So what are you waiting for!

I congratulate Mukesh Bhai that he has not only joined the select list of wealthiest persons in the world with his devotion, dedication and vision but also made the country proud. True, if the capabilities are utilised to the full, one can scale the summit. Mukesh Bhai has proved his mettle and ability in every field. 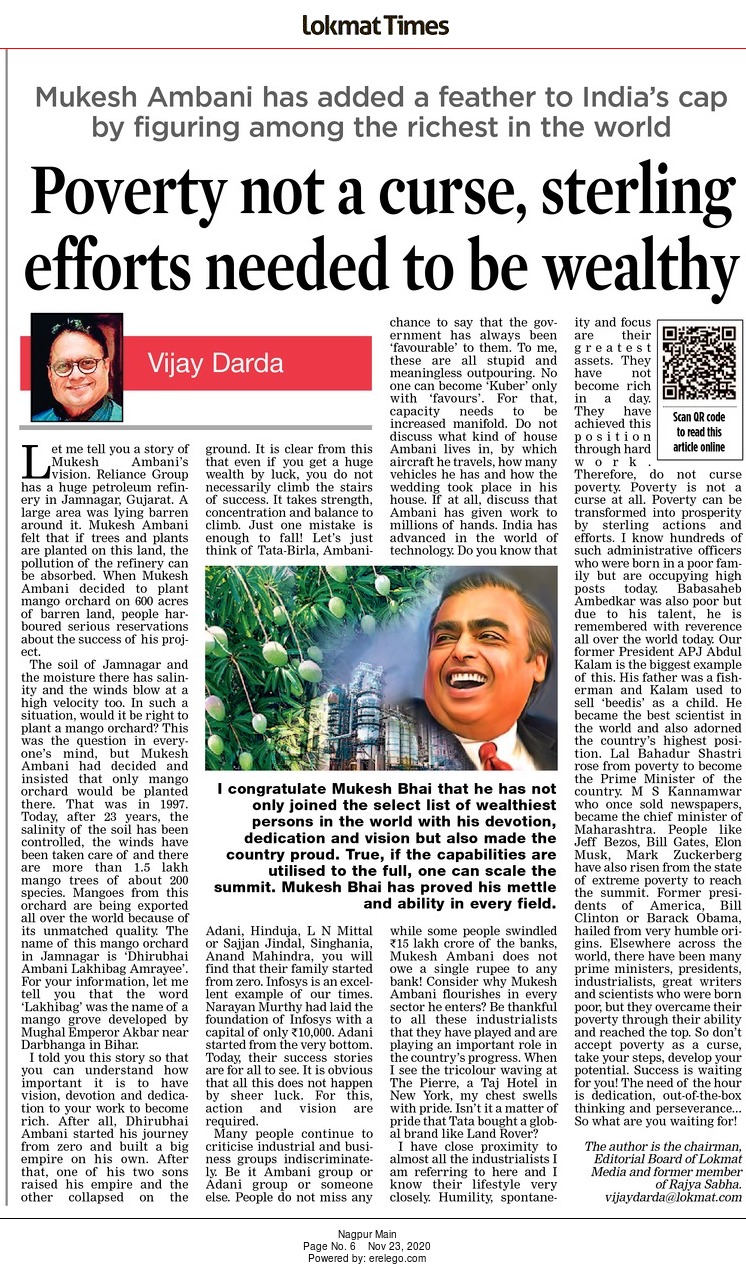 Why hunger, poverty do not infuriate us?