The positive message sent by Narendra Modi, the architect of BJP’s magnificent victory, is most welcome

First of all, I would like to congratulate Prime Minister Narendra Modi on this tremendous victory. I also want to congratulate the Congress president Rahul Gandhi for renewing the Congress ideology and thought. An analysis of why Congress faced debacle in spite of all this can be shelved for another day. At the moment, I am discussing about Modiji. The direct message of this election result is that he is the beacon of hope for the country. We should hope that he will fulfil the country’s expectations. After his historic victory, he certainly gave a positive message in his first address. In fact, if the humility that he has shown could percolate down to the lower cadre of BJP, it will write a new message of social harmony, coordination and development in this country!

There is no doubt that this election result has surprised even the political pundits. Except Maharashtra chief minister Devendra Fadnavis, hardly anybody hoped for such a landslide victory! What Devendra Fadnavis told me about the expected results during our conversation proved to be completely true. Fadnavis’ strategy, dedication and devotion to the common man gave the BJP a great boost in Maharashtra. Prior to the election, the permutations and combinations of the caste and religion, around which Indian politics was revolving indicated that hardly any party will get a majority. The expectations of a huge majority favoured neither BJP, nor Congress, nor ‘mahagathbandhan’; the Modi wave turned all the mathematics upside-down.

The BJP has not only touched the figure of 303 on its own but also performed spectacularly in a state like West Bengal. The party scored stunning victories in the states where the Congress had formed governments only a few months back. Converting the defeat that happened a few months back into victory was not easy, since there were many negative issues during Modi’s first tenure. There were many issues like rising unemployment, declining GDP, inflation, etc. Despite this, people rejected the Congress. They voted en bloc for Modiji! A whopping 65 per cent youths below 35 years of age believed in Modi’s competence. This issue is worthy of cool deliberation for the opposition parties as to why this happened.

Those who take a deeper look at this election know that this election was fought as a referendum on Modi’s performance. The whole party was with him but the party did not appear anywhere. There was only Modi everywhere. Modi was in Modi speeches, Modi was in the speeches of candidates, Modi was on the lips of the party leaders! The votes were sought in Modi’s name. The winning candidates also put the crown of victory on Modi’s head. And in this great festival of democracy, Modiji really proved that ‘with Modi it is possible’! It is the miracle of Modiji that for the first time in the Indian elections, caste was out of race. For the first time it happened that one party got more than 50 per cent of the votes.

Now Modiji has the responsibility to prove that even in the context of the problems of the country, he can prove that solving them is possible because of him. In his first message, he has said a very good thing: “There will be two castes in the country now – one who is poor and the other who will contribute in removing their poverty. Together, these two castes will eradicate poverty from the country.” This is a resolution of Modiji, because the biggest obstacle in our growth is poverty. What can be more bigger than the fact that we can eradicate poverty from the country? I think poverty needs to be seen in a broader context. Though economic poverty is a big issue, it is important to remove poverty of thought, education, employment and healthcare too.

The message he has given to the newly elected MPs and senior members of the NDA in the Central Hall of Parliament on Saturday evening will shape a new image of Modi. He said minorities have been exploited continuously and therefore, they could not make progress. Now he will create a new trust in the minds of minorities. This is really a significant message. If Modiji transformed this message to reality, this country will be recognised as the apostle of peace.

Of course, there is a massive mountain of expectations before Modiji. The tremendous victory has made expectations too big, but it is good that he loves to face challenges, takes bold decisions and decides his direction himself. It is good too that the master strategist Amit Shah is on his side. He is the Chanakya of politics who believes in converting impossible into possible. He is the strategist who laid the foundation of BJP’s victory and I am quite convinced that he will demonstrate the same ability in taking the country forward. In short, everyone in this country wants to get nutritious food, a roof over head, job, better healthcare, happiness and peace in the society, and of course harmonious relations with our neighbours as well! We should be known in the world as a developed country and not as a developing country. We will then say that this has become possible because of Modi!

There is no reservation in saying that there is no other person like Narendra Modi in Indian politics at this time. He is an expert in feeling the pulse of Indian people. The common man feels that he is capable of fulfilling their aspirations. Perhaps this is why the whole country is dancing to Modi’s tune. And this is the fact which the whole opposition has miserably failed to fathom. 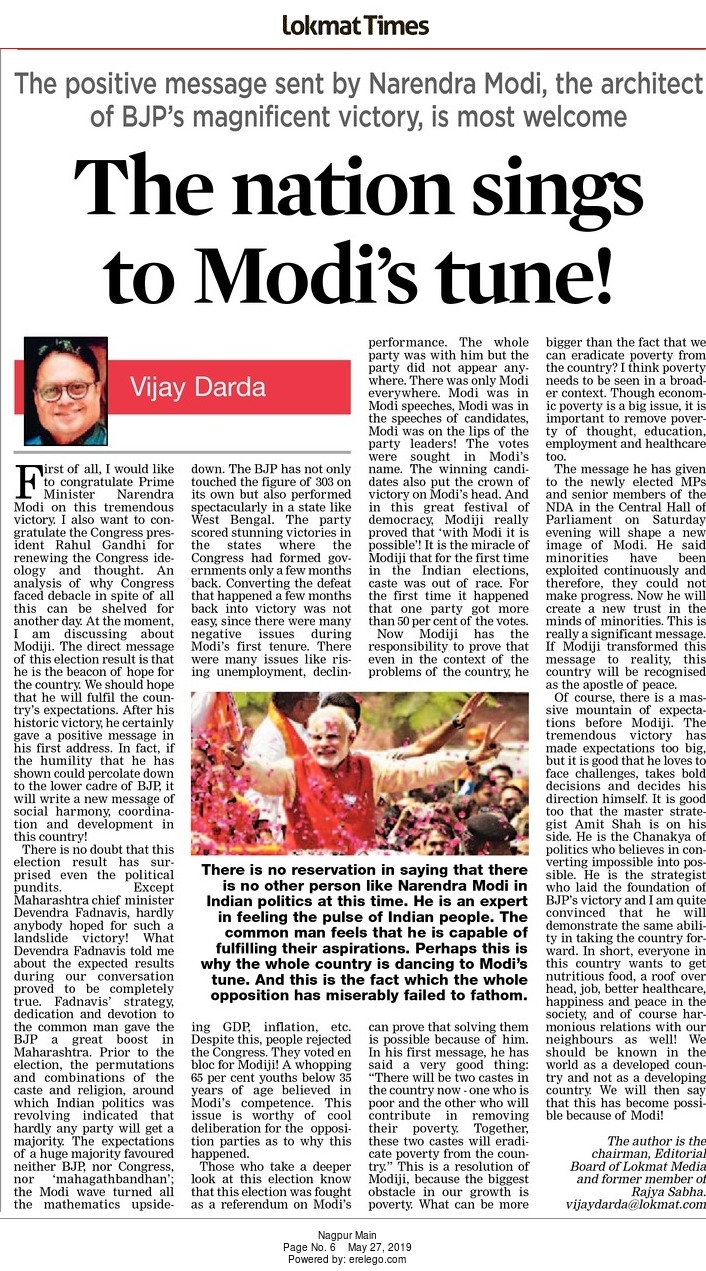 We need to imbibe the virtues of Lord Ganesh

Why hunger, poverty do not infuriate us?