Recently, there have been two prominent episodes in our public discourse that have highlighted the chronic curse of gender bias in our society. The first was the knee jerk reaction of the Union government banning the BBC documentary India’s Daughter narrating the story of that 23-year-old braveheart who was gang-raped in a moving bus on the streets of the national capital. The second was a reference to ‘saanvli’ women in the Rajya Sabha by the senior member Sharad Yadav.

Come to think of it, the Rajya Sabha was discussing the Insurance Amendment Bill when Sharad Yadav made those remarks. He was actually opposing the increase of the limit of foreign direct investment in that sector from 26 per cent to 49 per cent. Now, it is an irony that in the Rajya Sabha the Bill was moved by the Union minister of state for finance Jayant Sinha, whose father Yashwant Sinha, a former finance minister, had opposed the same proviso during the UPA regime in his capacity as the chairman of the standing committee for the finance ministry. As a socialist, Sharad Yadav has been traditionally opposed to capitalist ideas, and more so this concept of emulating ‘foreign or Western’ ideas. The colloquial term that he used is ‘fair-skinned’. It is this built-in attitudinal bias of looking for a ‘fair-skinned bride’ that got into his speech, and he rather stubbornly defended the use of such expressions. In the same vein, he referred to the ‘free access’ that the fair-skinned Leslie Udwin, the BBC documentary-maker, got in the Tihar jail when she interviewed the accused in the December 16 rape case. The references in the Rajya Sabha were not restricted just to saanvli women, but even the gods like Rama, Krishna and the concept of beauty in a woman as narrated by the poet Kalidas, and it was not just one person who enjoyed this drift. Others too joined in.

This actually is the rub of the problem when it comes to all the dimensions of gender bias in our society. It is not just insensitivity. There is a male feeling of being able to get away with all the flirtations and insults. The protests from the ladies are seen as unnecessary and often as a case of the ‘lady protests too much’. To compound the offence, even any subsequent expression of regret is overly loaded with condescension and self-righteousness.

In reality, Sharad Yadav had no business to drag women into his argument for opposing the hike in FDI limit in the insurance sector from 26 per cent to 49 per cent. He could have put forth his argument in terms that were expressed by Yashwant Sinha, and perhaps be more effective in exposing the weaknesses of this measure. Similarly, the Union government too had no business to ban the BBC documentary India’s Daughter and thereby make an emphatic statement on gender bias. On the contrary, if the people had been allowed to see it, then they would have made a fair assessment of its quality (or lack of it) on their own. In the final analysis, the banned documentary was freely available on the internet, and perhaps was seen by more persons as the ban aroused far more curiosity.

However, the larger issue is neither the FDI in insurance nor the quality of the BBC documentary. The main problem is our consistent failure to evolve as a society in terms of treating women as equals. It is not a question of individual attitudes. These may be different, and could vary from person to person. It is the collective approach that makes the vital difference. So, when an individual Sharad Yadav makes an observation, the other members are spurred to add their bit. Similarly, even before the BBC documentary was banned, there may be voices supporting it, but then the cry for the ban on the grounds that ‘India is shamed’ comes from a television channel that claims to be a leader in the matter of national opinion.

For men to draw the lines for the women is the worst kind of gender bias that creep into any society. This is an attitudinal deficiency and clearly shows that whereas men want the women to accept them for whatever they are, when it comes to dealing with women, the men want to lay down the terms of engagement. Hence men want dress code for women, and they want to set their norms for their public behaviour. The irony is that all this goes on while there is enormous lip service for their ‘empowerment’ and is also accompanied by some token gestures. But the bottom-line in this respect is very clear and non-negotiable. Unless, there is a complete attitudinal shift that makes everyone realise that a man and woman are equal, the deficiency in the gender bias structure shall remain. After all, the insult and crime against women is committed at an individual level, and is at a later stage endorsed by the society either through lack of adequate condemnation or equally deterrent punishment. It has to be admitted that the continued high incidence of crime against women is a proof that so long both condemnation and punishment have been less than adequately deterrent.

This is the cricket World Cup season, and India is among the four semi-finalists. As this week unfolds we shall get to know the final line-up. No point in making predictions about a game of such glorious uncertainties as cricket. But a word about the Bangladeshi protests after their quarter-final loss is surely in order. It is quite understandable that they are hurt and sorry at their loss. However, in a game where the umpires have the last word, it is only the bad losers who complain about faulty umpiring. That the criticism of the umpiring decisions has come not just from the cricket bosses but also the country’s Prime Minister shows the depth of anguish. But this is no way to play the game of cricket. For all its commercialisation it is a gentleman’s game at its core, and its beauty lies in the acceptance of the etiquettes on and off the field. Umpiring errors have a way of compensating themselves in the long run, and this needs to be internalised. More by the losers. 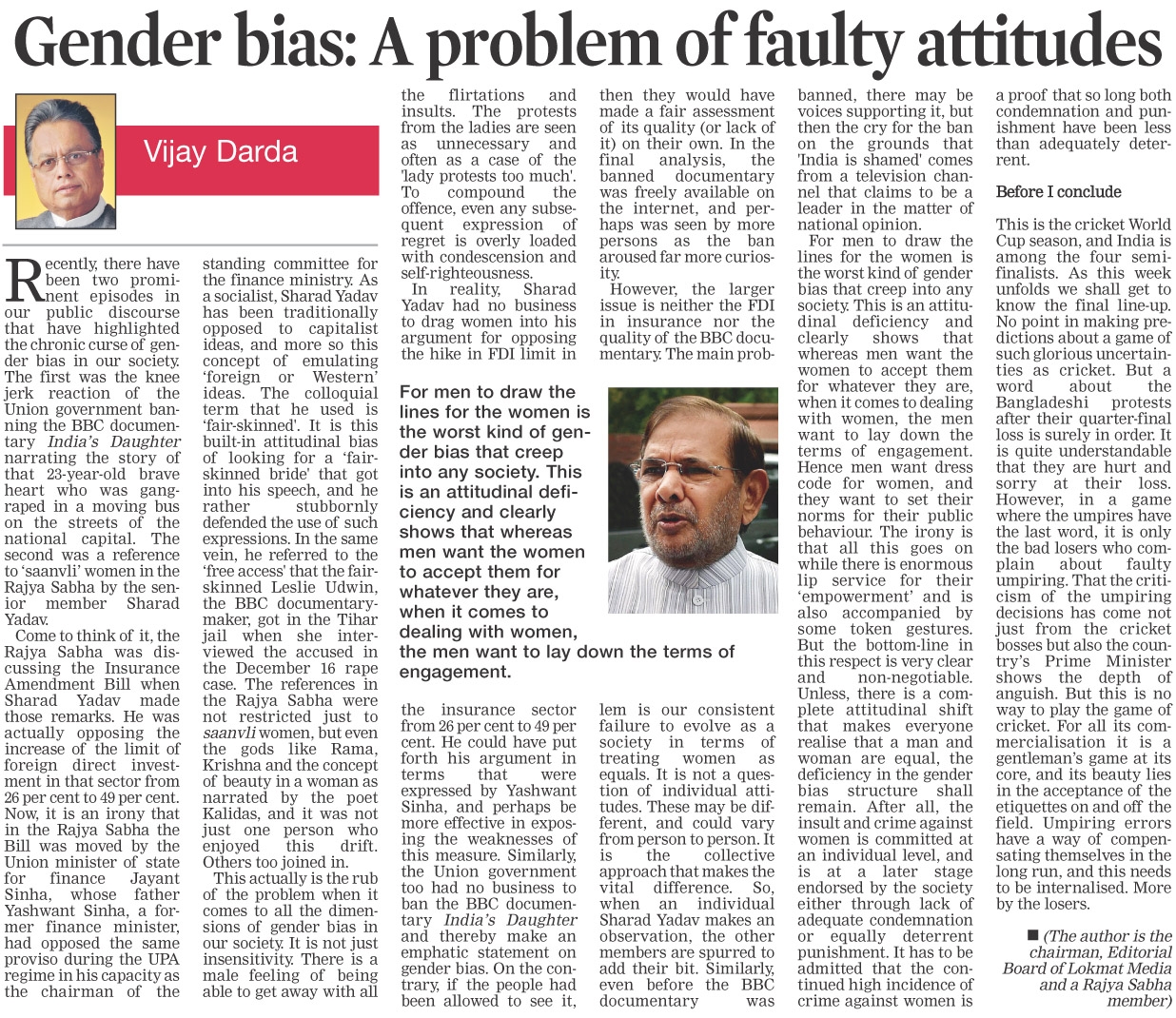