Mumbai, Feb 17: A talented and budding singer Hargun Kaur who is endowed with a melodious voice and Prathamesh Laghate, another promising singer with an impressive voice, were conferred upon the Lokmat Sur Jyotsna National Music Awards at a glittering ceremony at Shanmukhananda Hall in Mumbai on Tuesday in the presence of dignitaries and public representatives.

In the seventh year of the prestigious music awards, the talented singers were felicitated with ` 1 lakh and a scroll of honour each with the audience greeting them with thunderous applause and showering blessings on them.

The Sur Jyotsna National Music Awards are given away by the Lokmat Media Group in memory of Jyotsna Darda — the founder of Lokmat Sakhi Manch and a devotional singer.

The five-and-a-half hours awards ceremony was very colourful with the mesmerising performances by young artistes accompanied by melody, rhythm and beat sans speeches.

The ceremony started with the lighting of lamps by the dignitaries. The award ceremony started with Chairman of Editorial Board of Lokmat Media and former member of Rajya Sabha Vijay Darda delivering the introductory remarks and then the dignitaries were welcomed by Vijay Darda, Editor-in-Chief of Lokmat Media Rajendra Darda and director of Intrea Purva Kothari.

The digital premiere of this entire grand ceremony can be watched on Lokmat’s YouTube and Facebook page at 8.30 pm.

Special felicitation to the doyens of music

No speeches, we want songs only

All the dignitaries present at the ceremony avoided giving any speech. Vijay Darda appealed to the dignitaries to sing a song instead of making a speech. The appeal was greeted by Udit Narayan with the song ‘Dharti Sunhari Amber Neela…’, while Kailash Kher and Hariharan also expressed their sentiments with songs. As soon as Hariharan took the mike, the audience recited ‘Chappa Chappa Charkha Chale…’ He then performed the same tune and sang two lines of the song.

A galaxy of celebrities

The Sur Jyotsna National Music Awards has been instituted in memory of my wife Jyotsna Darda. Jyotsna was an ardent lover of music. She believed that if you want to live life well, you need to add music to your life. The Sur Jyotsna National Music Awards is a salute to the outstanding music talents. Veterans as well as emerging singers and musicians are honoured with this award.

— Vijay Darda,
Chairman of Editorial Board of Lokmat Media and former member of Rajya Sabha

A song by Amruta Fadnavis

Noted singer Amruta Fadnavis rendered ‘Damadam Mast Kalandar…’ Catching with the same thread, Vijay Darda also requested Devendra Fadnavis to sing the song. On that request, Fadnavis said, ‘Please organise a solo song programme for me then I will come again’. Fadnavis then paid homage to Jyotsna Darda by reminiscing about her.

The singers are being feted by Lokmat Media. This is a great service for the cause of music. It is a great motivation for the emerging artistes. Congratulations to Lokmat on its 50th anniversary.

I had received the 2019 Sur Jyotsna National Music Award. I consider it to be my great fortune to a sing in this event again today.

Thank you for bestowing on me the prestigious Sur Jyotsna National Music Award. I am thankful to the Lokmat Group for the respect and honour given to me. This is the most memorable day of my life.

‘Lokmat’ honoured me. I can not express my joy in words. This award has put a great responsibility on my shoulders so my performance should commensurate with the stature of the award. 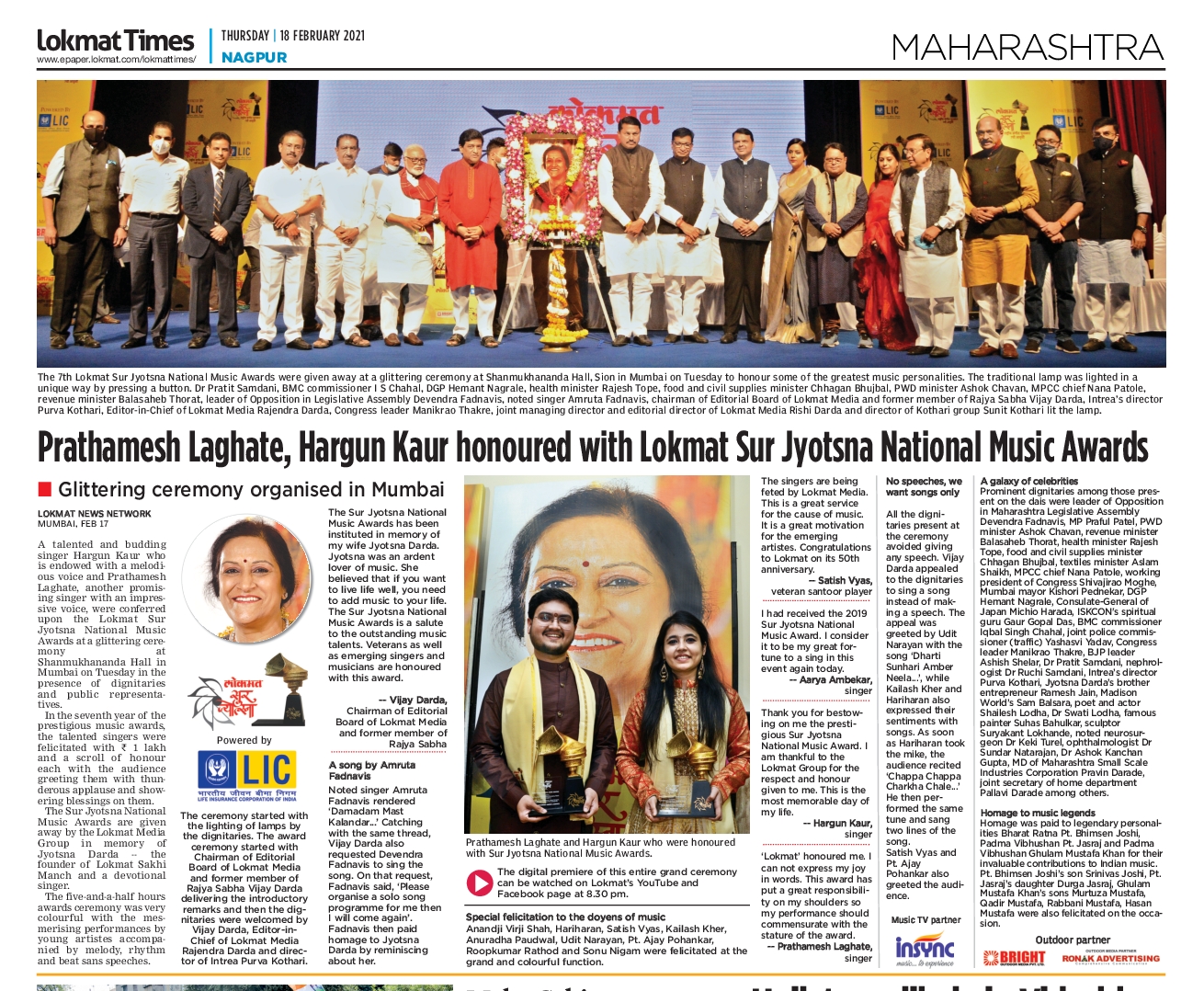