Hargun Kaur, who kept the Indians spellbound with her melodious voice and musical skills and Prathamesh Laghate — who made a name for himself through his singing at an early age — have won the ‘Sur Jyotsna’ National Music Awards 2020.

The ‘Sur Jyotsna National Music Awards 2020’ award ceremony would be organised by the Lokmat Media Group in memory of Jyotsna Darda — a devotional singer and founder of Lokmat Sakhi Manch .

The event will be held at Shanmukhananda Hall, Sion, on February 16 in Mumbai. This is the seventh year of the award ceremony honouring young and versatile talents in the field of music.

The main objective of the award is to trace and encourage musical talents from all over the country. Over the past six years, the platform has strived to inspire many artistes to make their mark in the field of music.

The Sur Jyotsna National Music Awards is a platform that has introduced many new musicians to the country and made a significant contribution in the field of music. In the last six years, the award has become widely known in the whole country.

Hargun was born in Amritsar. She was a finalist in the fifth season of “India’s Got Talent” and also “The Voice in 2019”. In the programme, A. R. Rehman praised her as a ‘Jai Ho’ performer.
She had reached the final of the fourth season of “Voice of Punjab”. At the event, renowned singer Asha Bhosle had wished her a bright future. When she was 9 years old, she had won the best harmonium player award at the national level. She has also sung for the Marathi film “Triple Seat” and won the ‘Best Playback Singer’ award for the film. Besides singing in Hindi and Marathi, she has sung in Punjabi, English, Gujarati and Telugu also. She is also a lyricist.

Born at Aravali in Ratnagiri district of Maharashtra, Prathamesh started singing and playing the tabla from the early age of four.

He was influenced by his uncle’s devotional singing circle and had a liking for music from his early childhood days and won many prizes in taluka and district level singing competitions. From 2003, he took classical music lessons from Satish Kunte and Veena Kunte at Chiplun. In 2008, he was selected for the “Sa Re Ga Ma Pa Little Champs” event. He became the only contestant to get the best ‘Ni’ 51 times in the entire competition.

Karunechya Sagara was his first solo album which was released. Currently, his first Swar, Marmabandhatali Thev and Panchatattva programmes are underway.

Dignitaries who selected the winners

Fans will get a chance to enjoy the musical concert. The organisers have appealed to the interested persons to send their names to 8108469407 for free passes. 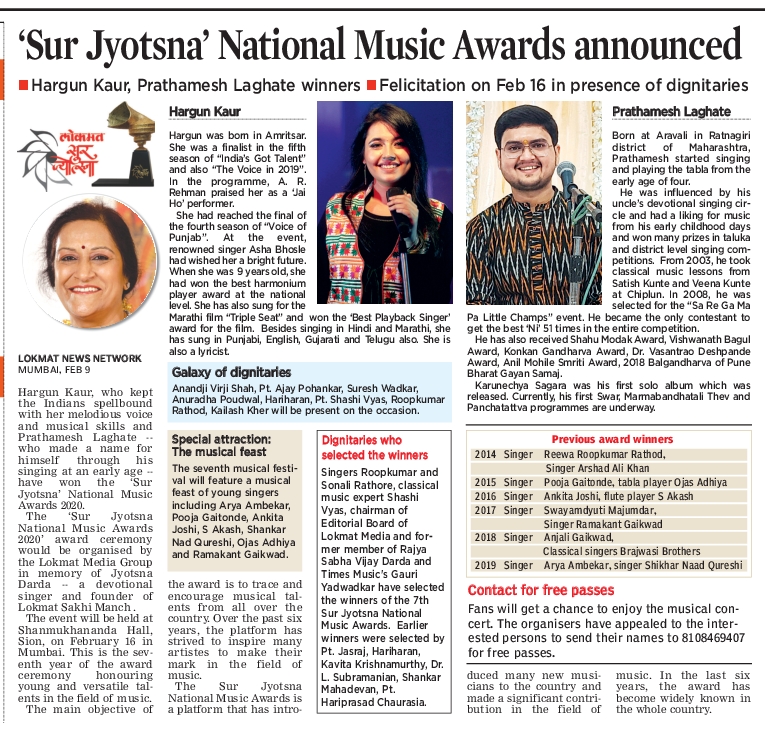