With the death of coronavirus whistleblower Dr Li Wenliang, why the Chinese police had taken him into custody, remains an unanswered question

There is more to the coronavirus outbreak than meets the eye. There are many dimensions to the crisis, which if looked at carefully, project a frightening scenario ahead. US senator Tom Cotton has stirred up a hornet’s nest by stating that China has tried to mislead the world by stating that the coronavirus broke out from Wuhan’s seafood market. But there is every possibility that this virus may have originated from Wuhan’s ‘super laboratory’ Wuhan Institute of Virology! Tom has not furnished any evidence to buttress his argument but his point cannot be ignored. The attitude of China and the death of Dr Li Wenliang of Wuhan Central Hospital have created deep suspicion.

Dr Wenliang told his colleagues in December that there was a serious virus infection that could not be cured. That’s when coronavirus patients started arriving at the hospital in Wuhan. Dr Wenliang also wrote about it on social media. He was later taken into custody by the police on January 1, 2020. He was released on January 3 when he tendered a written apology that what he had said was wrong. After that, he returned to the hospital, but just last week, the coronavirus killed him! The question is why did China detain him while coronavirus took the form of an epidemic? Did China want to hide something that Dr Wenliang knew? Whatever the truth, the debate has already started that China was developing the coronavirus in its super laboratory, Wuhan Institute of Virology, which came out by mistake!

In fact, these fears are being expressed because the world is greatly concerned about biological weapons at the moment. Countries like the US, Russia, France, China and the UK have already invented biological weapons. North Korea is also rapidly becoming a biological weapon state. There is also the risk of smuggling of biological weapons from one country to another. Just last week, Charles Lever, head of the Chemistry Department at Harvard University, was arrested for helping China, but the question was whether China had made so deep forays into the US.

The history of biological weapons is very old. In 1932, Japan had sprayed wheat seeds infected with some germs over China from aeroplanes. After that, the plague had killed about 3,000 Chinese. Biological weapons are considered to be the most dangerous because they spread fast covering a large area and cause a lot of people to die. It is also deadlier than chemical weapons and can be transmitted via grain to meat and fish and even fruits. It has surpassed chemical weapons. What has been investigated so far about the coronavirus has revealed that the virus is multiplying so fast that it will soon infect millions of people. Also remember Bill Gates’ warning in which he said the virus would kill 30 lakh people in a span of just six months.

Any initiative taken so far to ban biological weapons is of no use. In 1925, there was a treaty in Geneva in which there was talk of a ban on use but there was no restrictions on storage. In 1972, a new rule on the storage restrictions was added which came into effect in 1975. The treaty also covers more than 180 countries, but there is no mechanism to investigate who has or does not have biological weapons or who is developing it. The US, Russia and China do not want have any such investigative agency because they are afraid it might expose them. If there was such an investigative agency today, it could have investigated whether the coronavirus was really developed in China’s super laboratory?

What is even more worrying is that if biological weapons reach terrorist groups, what will happen to the world? In 2016, international intelligence organisations feared that the dreaded terrorist organisation Islamic State was trying to gain access to biological weapons and was also training terrorists. James Stavridis, a senior US Army officer at the time, had warned that the virus would spread to the world if the virus of diseases such as Ebola and Zika got into the hands of terrorists. More than 40 crore people would be killed.

Evidently, this is a serious concern for us as our country is facing terrorism and we share borders with countries like China and Pakistan. In Afghanistan in 2017, when a large number of people started to getting blisters in some areas, there was talk of a chemical attack. The then defence minister Manohar Parrikar had said we should also be prepared to deal with chemical and biological weapons. Now the question is how ready are we? And the challenge facing the world is how to curb the proliferation of biological and chemical weapons!

Even as coronavirus outbreak is wreaking havoc, the question is why did China initially try to hide the virus from the world? It is also suspected that the virus came out of Wuhan’s super laboratory? If so, the world should be on alert! 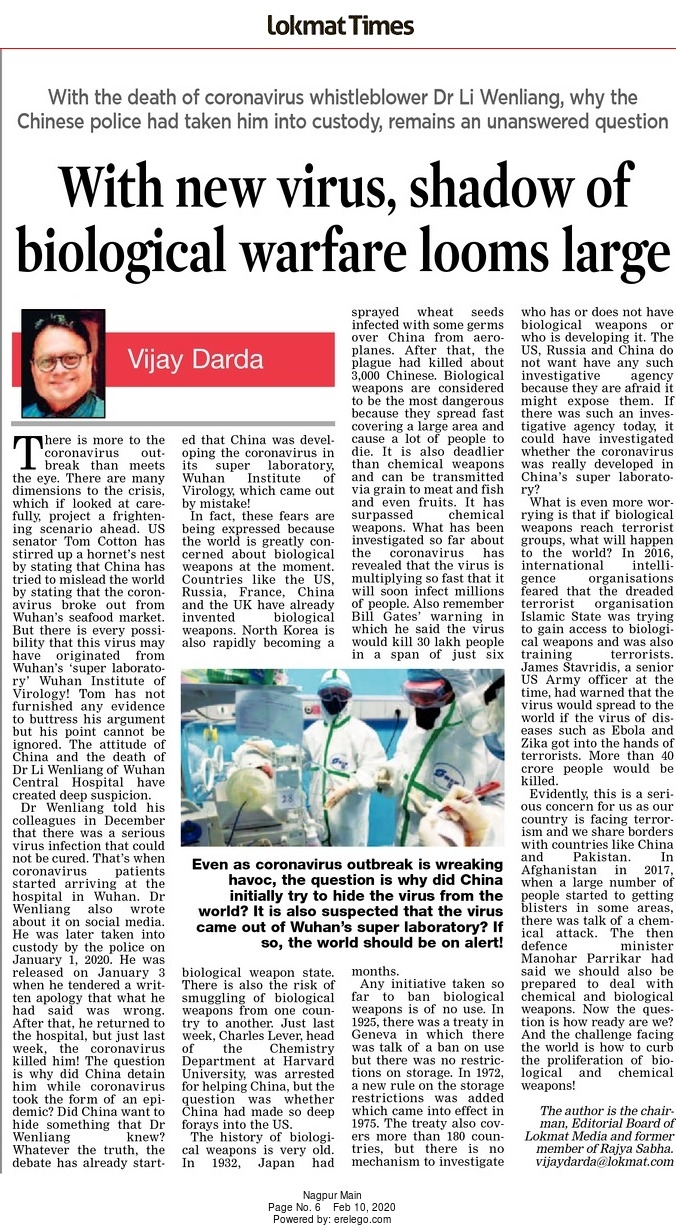 Torture is a wound in the soul of humanity