In the past seven months after the advent of the Modi government, there have been a series of statements and actions from the entire saffron brotherhood. This is the only expression that covers amorphous umbrella network of the Rashtriya Swayamsewak Sangh (RSS)-linked organisations and outfits right from the the Bharatiya Janata Party that rules the country to the Dharma Jagran Manch in Agra that got 100 Muslims converted into Hinduism. These acts and statements put together make us draw only one conclusion. The RSS has now started realising the ideal voiced by its second and most influential sarsanghchalak M.S. Golwalkar (Guruji) in 1949: “We have kept before ourselves the ideal of Bhagwan Shri Krishna who held a big empire under his thumb but refused to become an emperor himself.” We all know the role played by the current sarsanghchalak Dr Mohanrao Bhagwat in anointing the current Prime Minister Narendra Modi as the BJP’s prime ministerial candidate in face of internal opposition that manifested in the form of a then sulking and now side-lined L K Advani.

The list of such statements and actions is far too long, and any compilation can hardly be inclusive, but even a cursory look at a handful of these is quite unsettling. The real problem is that this phenomena can no longer be wished away as the pre-occupation of some fringe elements in the saffron brotherhood. It not only has the sanction of those who are firmly entrenched in power, but have the responsibility to steer the course of the nation. No one can argue that a Prime Minister elected on the development plank, with huge and tall promises to set fix every disaster that has been wreaked on the country in the last 60 years of Congress rule (his main campaign theme that struck a chord with the voters) is unaware of the impact these acts are collectively having on the state of affairs. His ministers –Sushma Swaraj, Smriti Irani and MPs like Ramesh Pokhriyal ( a former chief minister) know better than to talk about the Bhagwad Gita being named as the national book, Sanskrit as the third language and astrology being better than science. The main point being whose cause are they helping?

We all know that most ministers are swayamsewaks from the RSS and are proud of being associated with that organisation. But then perhaps Venkaiah Naidu would be able to explain as to what makes them being proud of the RSS? Is it the reference to Godse’s patriotism in killing Mahatma Gandhi? Is it the zeal to ‘re-convert” Muslims back to Hinduism? More so, when their own ministers have claimed that all those living in India are Hindus? Besides, the RSS has been telling all and sundry that Hinduism is not a religion and just a way of life. So why have these re-conversions and also why talk of an anti-conversion law? But then years of experience with the RSS have always demonstrated that it is futile to look for logical and compatible answers when dealing with its words and deeds. Both the words and deeds are deliberately calculated and calibrated to confuse and conquer.

Let us first accept that this is an RSS government. We should go back to Golwalkar’s 1949 quest, when he said: ‘If the Congress completely disintegrates and anarchy rules the country and there is nobody to take over. . . we may sacrifice part of our normal cultural activities and accept the responsibility’

Now, of the three conditions that he listed for an RSS takeover — disintegration of the Congress, anarchy in the country, and nobody to take over — barring the second in the sense that there is no anarchy — the other two have been met to quite a great extent. So, the BJP may have been voted to power, but the real Sri Krishna is the RSS. In this sense, the confusion prevails, but there is no doubt about the conquest. They have an absolute majority in the Lok Sabha, and find a person among these 282 who can challenge param poojniya sarsanghchalak Bhagwat’s ‘wisdom and sagacity’.

So, it is natural that issues like white-washing Godse’s act of murdering Mahatma Gandhi, and undoing the centuries of wrongs that are perceived to have been committed by the Muslims and Christians, restoring the glory of Sanskrit, making the Gita the national book, giving prominence to astrology over science – – in short restoring the pride of Bharat when it was ‘vishwa guru” in those long forgotten times have to become the national priorities, forget restoring growth rates of GDP or other issues. In its almost 90-year-long existence, the RSS has never bothered about economic growth and such issues. Ask Dinanath Batra, the teacher who fights the RSS battles for changing the curriculum in schools, and then you have all the answers?

Most ministers in the government also know that nothing much changes in the real life because of these ways of the RSS. They are all too much of realists to be led away by such tactics. But then the RSS provides them the organisational muscle to get elected. By the latest count, the RSS has some 1.60 lakh projects in various social sectors, and all these are pooled for political purposes when the time comes. But it would be a mistake to believe that the RSS and its ministers are working at cross purposes or their actions are disjointed.

Contrary to the messaging that these are ‘uncontrolled distractions’, the fact remains that these so-called ‘loony ideas’ are indeed a welcome relief for the Modi government. Or else the headlines would be moving in the wrong direction–focussing on the government’s failures. Take just one instance. Crude oil prices have been slipping for months and a government that promised to be more market friendly and accused the previous one of policy paralysis has refused to pass on the benefit to the consumers and on top of it introduced more taxes. Now, thank Sadhvi Niranjan Jyoti and Sakshi Maharaj for keeping such troubling concerns away from headlines.

Just a word about the alternative to Planning Commission. Not many would disagree with the idea that the Planning Commission needs a re-look. But then what was the haste in announcing its demise without having a detailed consultation about the alternative? It only adds to the confusion and sends wrong signals about our ability to govern as a nation. 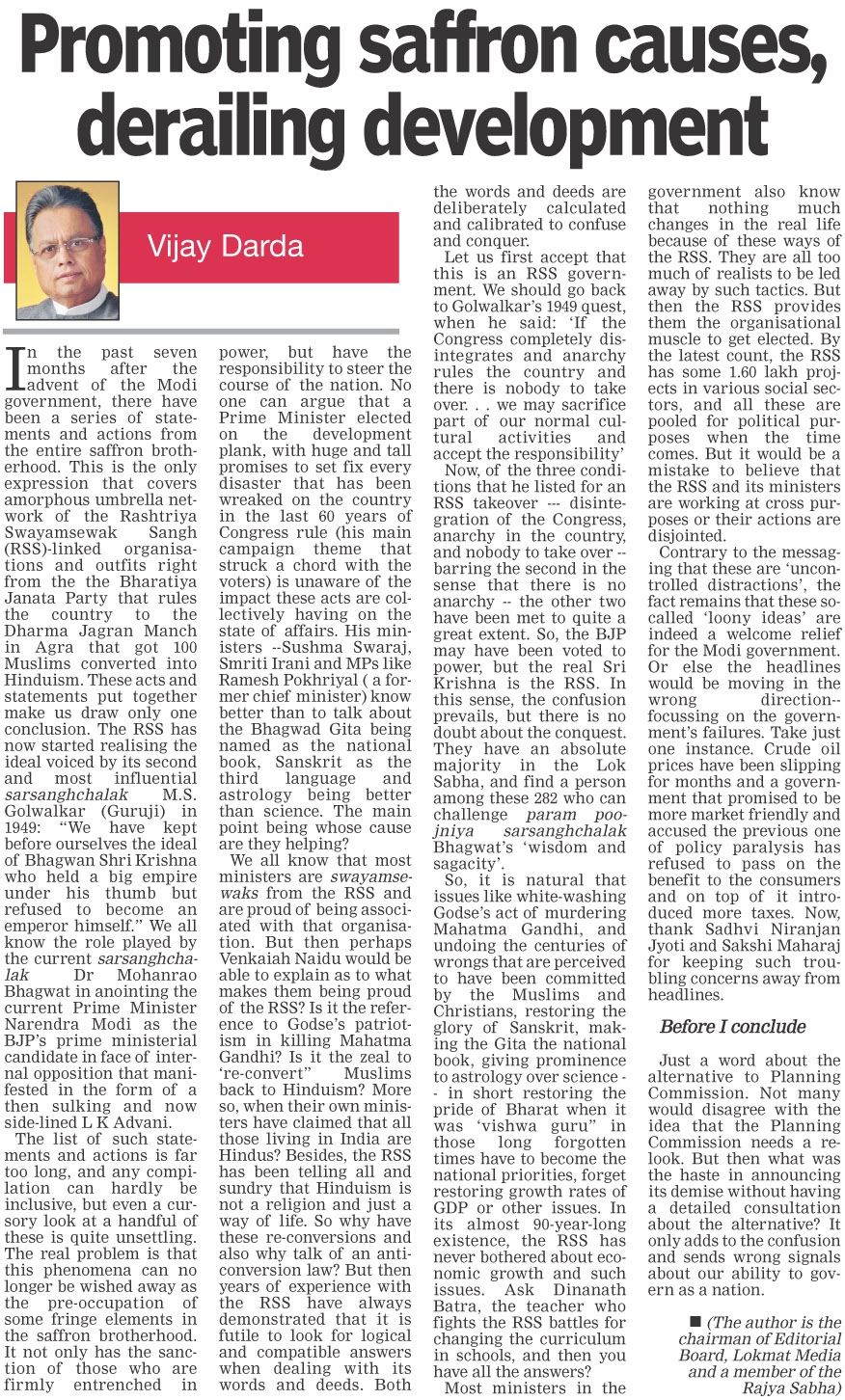