The two incidents which took place last week clearly reflect that they are intended to intimidate. The way the Chief Justice of India Justice Ranjan Gogoi has been targeted, it seems that there is someone who wants to intimidate him. In fact, attempts to intimidate and subvert all constitutional institutions are clearly visible. Leaders of the Opposition are already frightened. The bureaucracy is terrified. Even a section of the media is living in fear.

The woman who has leveled allegations against the CJI had previously been jailed on charges of seeking bribe from a person promising to secure him a job. It is believed that she has made such an allegation at the behest of some vested interests. The alleged incident happened after Ranjan Gogoi had already become Chief Justice. A special hearing was also held in the Supreme Court on Saturday over her allegations. During the hearing, Ranjan Gogoi dismissed the allegations as baseless, expressing fears that ‘the judiciary is under very serious threat’. Many important cases are to be heard next week, so intentionally such allegations have been levelled. Some people want to weaken the Office of the Chief Justice of India. Nobody could make allegations of corruption against him, so this kind of allegation has been made to defame him. There seems to be not just one person behind it, but a lot many people seem to be involved.

Gogoi’s references to the judiciary being under serious threat and the attempt to ‘deactivate’ the CJI office are really very worrisome. It is very important for the apex court to remain independent. In recent days, the country is feeling that efforts are being made to weaken all the constitutional powers which are the basic strength of democracy. If the conspirators succeed in their nefarious designs, then it would be very dangerous for the country.

Now look at the second incident. I am pained even while referring to the language used by Sadhvi Pragya Singh Thakur against Mumbai Anti-Terrorist Squad chief Hemant Karkare, who was martyred in the Mumbai terror attack. I feel very sad and distraught while quoting Sadhvi Pragya Singh Thakur who said, “I had told Hemant Karkare that you will be destroyed, and his inauspicious period began in a quarter and a month after my curse and he was killed by the terrorists.” It astonishes me that a Sadhvi should make such a derogatory statement! Saints never feel that way. Therefore, I believe that Pragya Singh Thakur, who is called a Sadhvi, has also insulted the tradition of saints.

Sadhvi Pragya is the main accused in the Malegaon bomb blasts case because the motorcycle that was used in the bomb blasts was registered in her name. Then Hemant Karkare used to be the chief of the Anti-Terrorist Squad. He was given the responsibility to interrogate Pragya. He had interrogated her. After that 26/11/2008 terrorist attack on Mumbai took place and Karkare was martyred while taking on the terrorists. The country mourned over the martyrdom of the brave and capable officer. In 2009, he was posthumously awarded the Ashoka Chakra, the highest honour given in peace time.

When Sadhvi Pragya Singh Thakur made an insulting remark against such a brave martyr, it was natural that people all over the country should take umbrage at her statement. Within a few hours, Pragya withdrew her statement, but remember that she has not apologised for her comment. Anyway, by apologising to someone, the severity of anyone’s crime does not diminish. Not at all, particularly in the Sadhvi’s case because she has insulted the officer who has laid down his life for the country. Sadhvi herself is facing a serious charge of killing people.

The question is who is the power behind the Sadhvi? The whole country knows the answer. The country is asking the BJP this question as to why it did not think twice before making the Malegaon blast accused its candidate for Lok Sabha elections. Does it think that people have blindfolded their eyes? No such system counts for the BJP which is hell-bent on retaining power at all costs! Unfortunately, Opposition unity is not visible anywhere to rein in such thinking. A large section of the media has also gone submissive. This situation is fatal for the nation and for democracy. But we have to march ahead of fear or else the fear of perdition will stare us in the face.

The unjustified allegations against the country’s Chief Justice Ranjan Gogoi and the insult of the martyr Hemant Karkare are two such incidents that should be seen as scary. If you look from the standpoint of constitutional institutions, the situation certainly looks dangerous. 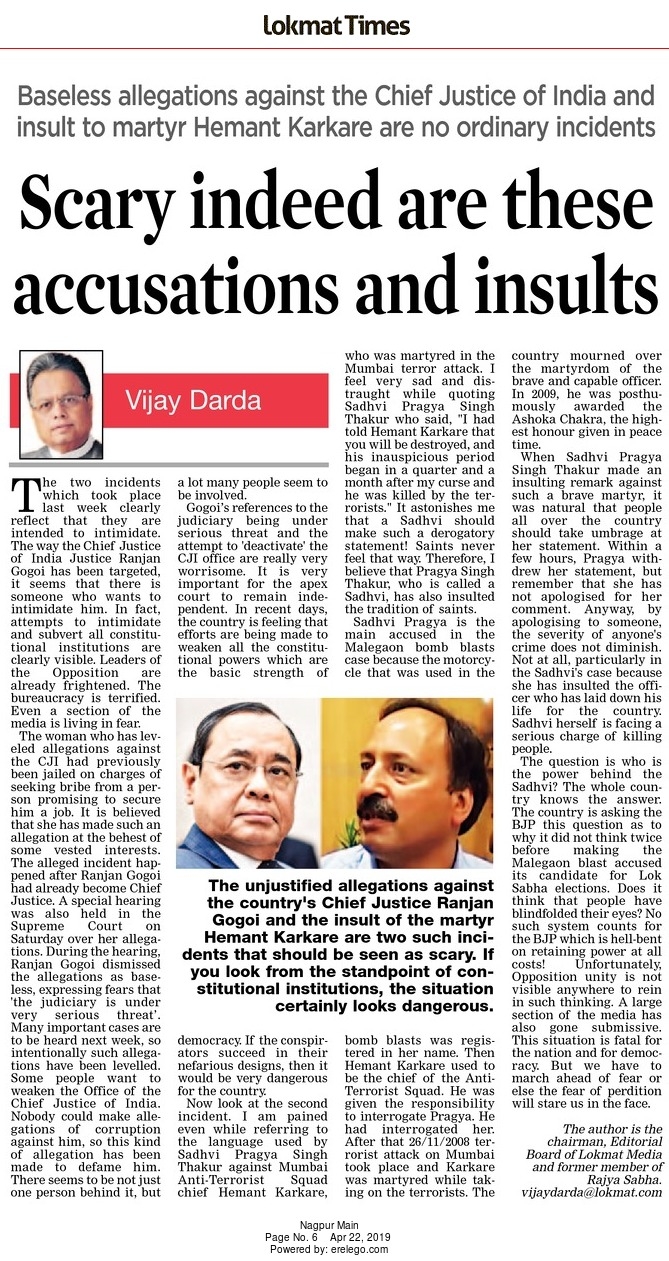 Crisis of confidence: Threat to democracy