It goes without saying that our country has made tremendous progress since independence. Yes, we still have many challenges to overcome but this does not undermine our successes in diverse fields. When we became independent in 1947, our literacy rate was only 12 per cent. When we celebrated first Republic Day on January 26, 1950, our literacy rate had reached nearly 18 per cent. But today, our literacy rate is estimated to have crossed 80 per cent. On the occasion of Republic Day, I am talking about education because the development of the nation depends on how educated and skilled its citizens are.

When we attained independence, we could not even grow enough food to feed the country properly. We did not even have basic factories to meet our requirements. Today, we make most of our goods ourselves and also export on a large scale. So it is obvious that in case of development, our pace cannot be said to be less than any other nation. Often, our country has unfairly been compared with China. It is stated that China became independent after us but it has grown more than us. We need to understand that China has made this progress by crushing the basic rights of its people.

We have achieved progress by following the path of democracy and we should be proud of that. We are proud of the fact that irrespective of which party formed the government, no matter who occupied the prime minister’s chair, they have all contributed to the development of the country to their full potential. The contribution of every prime minister right from Jawaharlal Nehru to Narendra Modi cannot be forgotten. If we look at some recent figures, the world is baffled at our pace of progress. During the tenure of Narendra Modi, more than 11 crore toilets were built for the use of 60 crore people. In 2014, 38.7 per cent people had toilets in their homes; now about 98 per cent have it. Under the Ujjwala scheme, eight crore poor women were given LPG connections in a span of only four years. Women have got freedom from firewood smoke and thus forests are also being saved. There is no doubt we are dominating every field of human endeavour right from agriculture to space.

Amid all the success, there are some important issues which need to be addressed too. It is time to think why our GDP is falling. Why are industries passing through recession? Why are there no buyers in the market? Why do people feel that unemployment is increasing? Why does the poor section and lower middle class families feel crushed by inflation? Why is the youth of the country restless? Why farmers are continuing to commit suicide? Why are the government education system and health services in bad shape? Why is the condition of government hospitals not changing? Where should the poor send their children to for education? I am sure that the Prime Minister must be doing something to resolve these issues too.

Since I have been a Parliamentarian for a long time, I know very well how the government machinery works. There is no doubt about Narendra Modi’s style of functioning and his dedication, but the system through which the work is done can ensure a higher percentage of success. When I watch the parade on the Republic Day or the Independence Day in Delhi, my heart swells with pride. But at the same time, I am compelled to think why many people in our country are still not able to get two square meals a day? Why do people sleep on the footpath? Why don’t they have their own houses? Why only a handful of people have most of the country’s wealth? This aspect also needs to be pondered over.

I feel these are challenging times and we should not raise any issue which will create needless controversy. There are several crucial issues before the country that need our attention. Ideological issues can be put on the backburner and the burning issues before the country need to be focussed on. Immediate and peaceful resolution of disputes that have arisen is the need of the hour. We will be able to move forward on the path of development only when there is an atmosphere of peace and harmony. We all have the responsibility to remain within the ambit of the Constitution and hoist the flag of our Republic all over the world! So congratulations and best wishes to all of you on the Republic Day! We all want to be good citizens, this is our fervent wish. I also take this opportunity to salute our police force, paramilitary forces and Indian Armed Forces who are defending the Republic of India with courage and dedication. Jai Hind!

We are proud to celebrate the 71st Republic Day today. Best wishes to all of you! Over the years, we have certainly made tremendous progress. But amid many successes we have achieved, all of us need to seriously ponder over some issues of the common man. 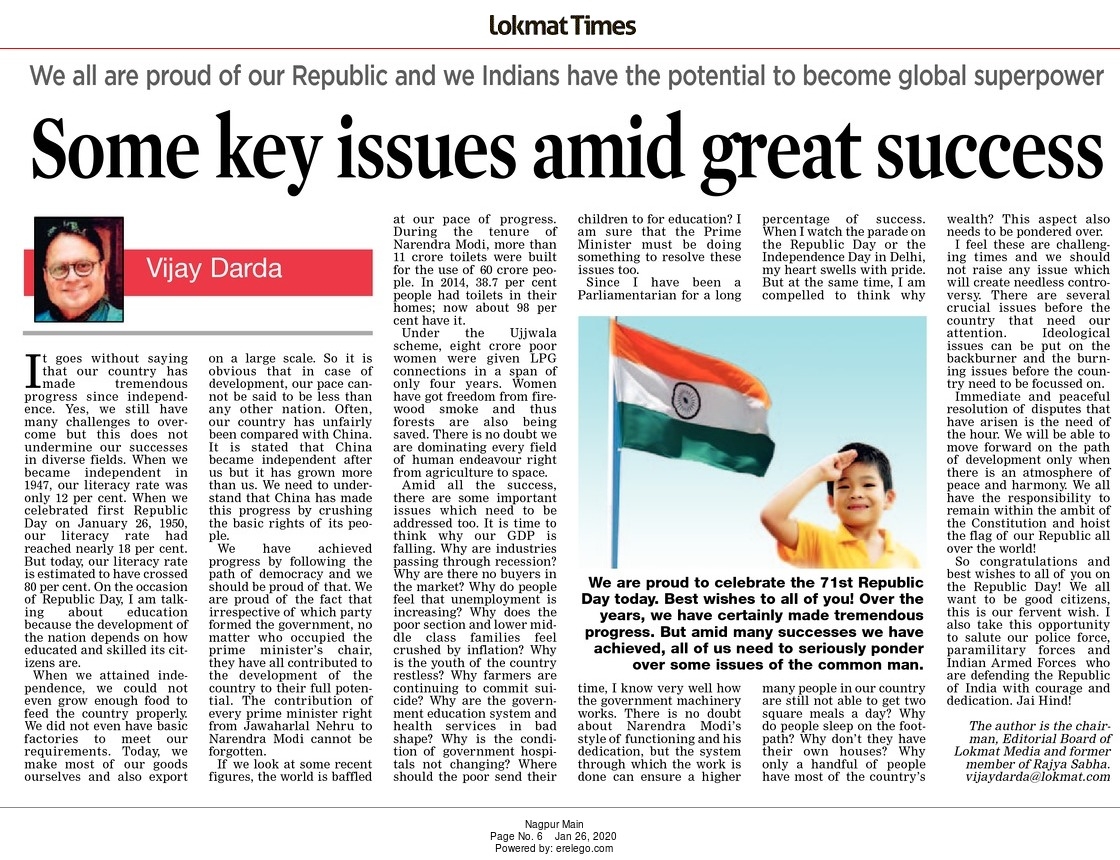 Vietnamese people are an amazing example of bravery