Right from the time, the Congress Working Committee resolved that a separate state of Telangana would be carved out from the unified Andhra Pradesh, the people of Seemandhra have been restless. They have been raising a cry that they would not allow the bifurcation of the state. I appreciate their zeal, but then I also strongly wish that even if they had been a fraction as passionate about ensuring that the Telangana region does not get a raw deal for the last 60 odd years, we would not have reached this situation. Their love for the unity of Andhra Pradesh is like the desperate wish of a man who seeks to preserve his marriage after his wife has got divorce from the court on the grounds of cruelty.

But then I must appreciate the firmness with which the Congress leadership has dealt with the entire issue. All the political parties were taken on board. The unfortunate part of our polity is that politicians do not stick to their commitment. In this context both the parties — the YSR Congress party and the TDP — had agreed to the formation of Telangana and their protests now are simply a part of the political grandstanding. Even the Andhra Pradesh chief minister Kiran Kumar Reddy was a part of the entire decision making process. It should be accepted that the spirit of democracy demands that once you are a part of process, then you must stick to the outcome, even if it goes against your wishes. The Andhra politicians have betrayed this spirit of democracy for their selfish interests.

However, there is a systemic dimension to this entire exercise which reflects a rather bigger malaise in the process of handling contentious issues. Although there are various aspects to it, in essence this represents an approach wherein a problem is allowed to grow till a festering sore becomes a serious wound and the only option is to apply corrective surgery. If it does not remain amenable to treatment by medicines and it can be handled only through surgery. Naturally, a lot of blood is shed in the corrective operation and the avoidable collateral damage has to be suffered.

In the case of Telangana, the decision makers had several opportunities during the last 10 years to come to a workable solution. The separate state was promised in 2004, and as we know now the Congress president Sonia Gandhi was keen to fulfil that assurance given to the people. Now, 10 years is a long time, and having taken that decision in principle, the entire decision making machinery should have been activated to resolve all the vexatious issues. For instance, if they had not been working to such tight deadlines after the CWC resolution, they could have come up with a well formulated solution to problems like the new capital of Seemandhra, the water sharing between the two emerging states and a host of issues that are bothering the people and forcing them to take to the streets. But then the system seems to assume that it can take all decisions at its own good pace and force the people to accept them without a murmur. This is a flawed assumption and extracts a very heavy price.

Now, in the same context comes up the issue of separate Vidarbha. Just as the people of Telangana were assured in 2004 that the separate state would be carved out, the people of Vidarbha were also assured that their demand for a separate state would be met alongside Telangana. In other words, once the decision to form Telangana is taken, then the decision on separate Vidarbha should happen simultaneously. Now, I am aware of all the arguments that come against the bifurcation of Maharashtra, and without agreeing to them I respect the sentiments that are expressed in the process. I also readily concede that the Vidarbha region is not as politically volatile as Telangana and the kind of violent street protests that forced the government’s hands virtually after 10 long years are not seen in Vidarbha. But then the farmers of Vidarbha have protested with the ultimate sacrifice — suicides. It would be a big flaw to assume that these suicides are a consequence of some temporary circumstances.

The farmer in Vidarbha would not have been driven to suicides if this had been a separate state. Then its irrigation facilities would not have suffered the kind of cumulative neglect that has been witnessed for decades. There would have been no development backlog, and the state would have used its own resources to meet its developmental needs. But I am also aware that the system does not work in this manner. It is simply not used to thinking in a logical manner and the people pay the price for its inadequacies.

Under such circumstances the people of Vidarbha can only hope that a new generation leadership under Rahul Gandhi also brings in a different approach towards problem solving. I trust that the kind of genetic freshness that has been witnessed in his approach on the ordinance for the tainted politicians, is not just a headline grabbing knee jerk reaction. Taking forward the family’s tradition for innovations, he would also push for other changes that have equally far reaching impact.

We know that the decision to form separate Telangana is a welcome step, but it comes with so much pain that it leaves a bitter aftertaste. The right thing to happen in consonance with the unique feature of unity in diversity of our plural culture, would have been that there should have been joy on both sides that two Telugu speaking states are coming into existence instead of one. I also fervently hope that when Vidarbha comes into existence in due course of time, and I have a firm belief that indeed it is a matter of time, then both the Marathi speaking states of the Indian union would rejoice and there would be no blood on streets.

After all, we must learn from the Telangana experience and have a painless parting. Let us admit that the people of Vidarbha have suffered for far too long, and the people of the rest of Maharashtra should readily and logically concede this fact. 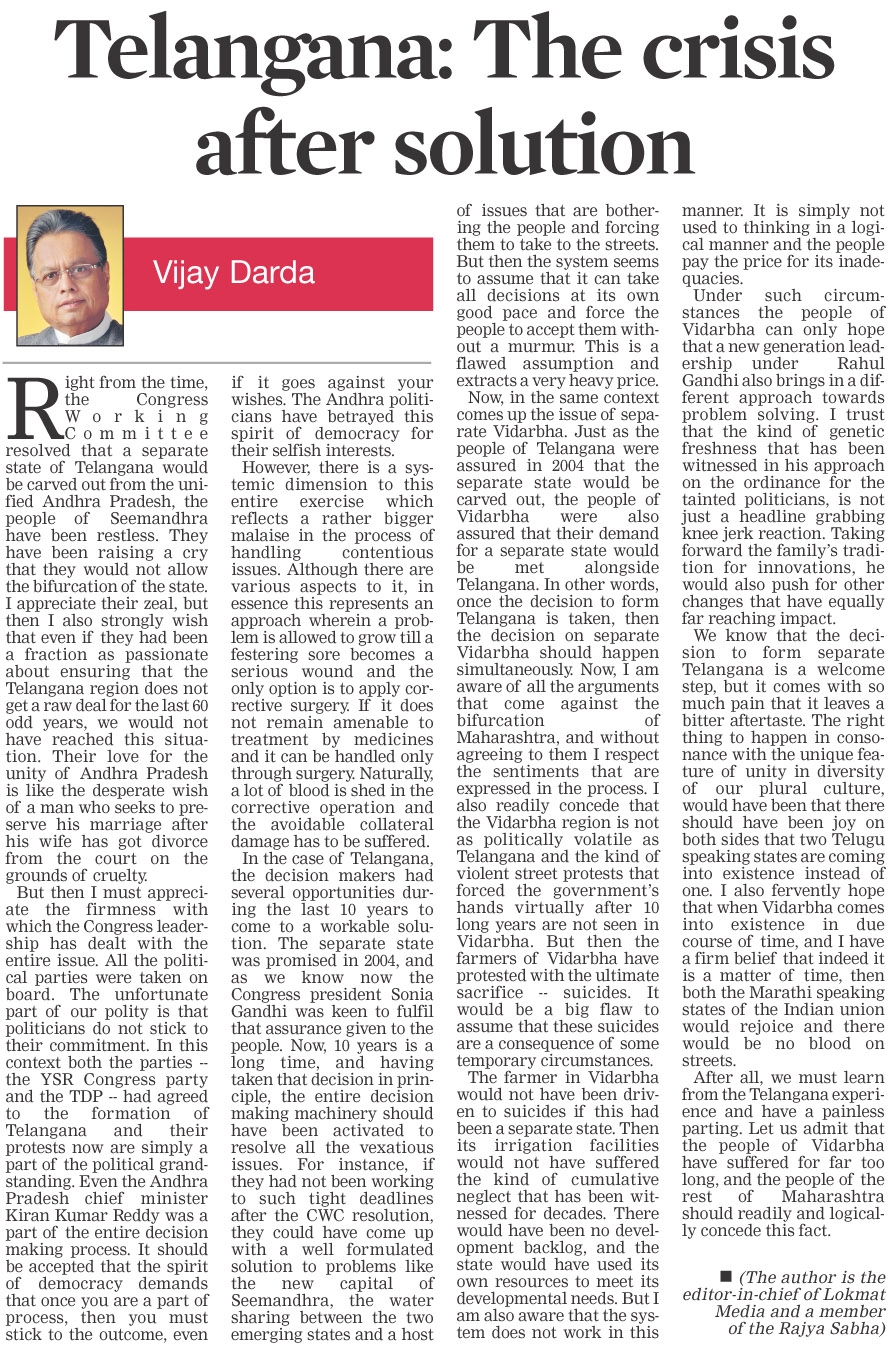