The legitimacy for separate Telangana is an issue beyond debate. There is historical evidence to establish it, and there is an increasing amount of documentation to assert that political leaders too have accepted it.

But then we know from experience, that the right thing seldom gets done. The people from the Seemandhra region are opposed to the creation of separate Telangana. They are powerful men. Just look at the profile of Lagdapati Rajagopal, the Vijaywada MP, who is now globally notorious for using pepper spray in the parliament.

He is the son-in-law of a former Union railways minister P Upendra. At 53, he is the chairman of the Lanco group of companies that has grown in the last two decades to have business interests in power, mining, solar energy and a host of other businesses. The assets of the Lanco group are estimated to be above Rs 50,000 crores. He has recently flexed his muscles to make his lenders agree to a restructuring of ` 7,000 crores loans. The prominent piece of real estate known as Lanco Hills in Hyderabad would go to the Telangana region should the new state come into being.

We would do well to recall that it was the policy of linguistic reorganization of the states that brought these two regions together. Pandit Jawaharlal Nehru whose foresight and vision have stood us in good stead in various fields made a very prophetic observation about the creation of the unified state of Andhra Pradesh. He said, “So this particular combination of a part of Hyderabad state with Andhra – this marriage, as I call it — has many features, good and bad, which often accompany marriages. That is to say it is good if the two cooperate and flourish to the advantage of each other. But, there are also risks and dangers if different temperaments and other things which may come in the way of smooth working so essential for the success of the marriage. Therefore, it is necessary, that there should be a very great degree of capacity to adjust oneself, capacity to appreciate other’s viewpoints, capacity to allow the other person to grow in his own way and not impose oneself on others.”

Quite clearly this marriage has not worked, and this has been proved beyond doubt by the disparities in the growth of different regions. Barring the capital of Hyderabad, the rest of the Telangana region is impoverished compared to the flourishing regions of Seemandhra and Rayalaseema. The opponents of Telangana now demand that Hyderabad be converted into a Union territory. This reflects the same approach that was advocated in the early 50s, by the chief minister of Bombay Morarji Desai who wanted Mumbai to be converted into a Union territory at the time of the Samyukta Maharashtra Movement and also opposed the creation of the states of Gujarat and Maharashtra. The intent and reasons may be different, but the outcome is the same.

In the 50s, during the early stage of independence it may have been reasonable to have one state for one regional language. But then in the last six decades, the demographics have changed. If the size of the population was a deciding factor in the 50s, then it has to be accepted that now there is no logic for delaying the creation of more than one state for one regional language. So, there can be two Telugu speaking or Marathi speaking states without creating any animosity. After all, there are several Hindi speaking states, and they are living harmoniously. This forced unity on linguistic basis is actually detrimental for the nation’s balanced growth.

Then again, we did not come to the Telangana situation overnight. We have come to this pass after years of deliberation. Indeed, now, the Congress leadership may be charged with hurrying up the process, but we should remember that some months ago, the same leadership was accused of delaying the decision. That was the time when Telangana was on the boil, and lives were being lost.

This is an opportune time to remember that regional disparities within the states is a serious problem and that smaller states is the only answer to this complex problem. It is not for nothing that the Congress president Sonia Gandhi had committed herself to the creation of a separate Vidarbha alongside Telangana. The rationale for Vidarbha and Telangana has always been the same. Right from the time of the first States Reorganisation Commission which recommended these two independent states. If in the merger with Andhra, Telangana has suffered at the hands of Seemandhra, then in becoming a part of Maharashtra, Vidarbha has suffered the same fate at the hands of Western Maharashtra. The comparison is simply unmistakable.

The Congress president has taken a courageous decision in going ahead with the creation of Telangana. We are seeing the difficulties that are coming in her path of getting the decision executed. But this is the larger failure of governance, and floor management in parliament. The tact and determination that is required to push through such legislations has been lacking. Quite simply, something that has been done after the ‘shame’ on Indian democracy could have been done much earlier. What prevented the expulsion of these Seemandhra MPs from the Lok Sabha before the incident is the question waiting to be answered? After all, they had made their intent known from the first day of this session.

But now we have seen two different solutions. Separate statehood for Telangana, and nothing for Vidarbha. Perhaps, the patient people of Vidarbha are not getting their due as compared to the volatile folks of Telangana. They too ask a question as to why did the Congress president fail to keep up the promise of creating a separate Vidarbha along with Telangana? May be their anger is muted and not as volatile as that of Telangana. However, anger and discontent are not expressed only through violent acts. In a democracy, people convey their feelings through different means. Vidarbha is no longer the impenetrable Congress bastion that it was during the days of Indira Gandhi, when all the 11 Lok Sabha seats were captured by her. We have a General Election round the corner, and who knows what lies in store for everyone? 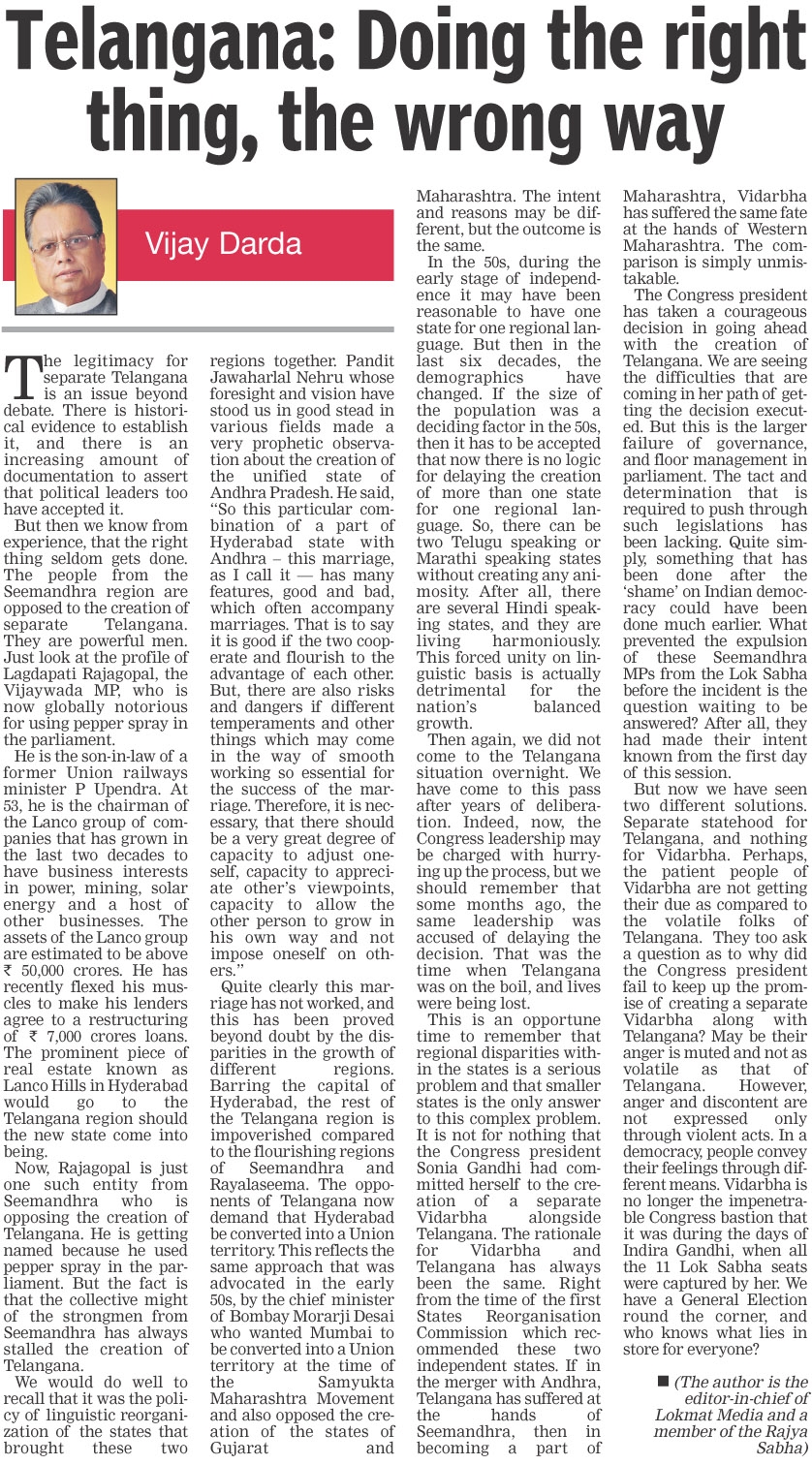