Temple of democracy should always be open

No matter how serious and extraordinary the circumstances, it’s not proper to suspend any session of Parliament.

The opposition parties have even alleged that the government is trying to kill democracy by using the subterfuge of the coronavirus pandemic. I will not use such harsh words, but it is true that democracy will suffer when the questions of the common man are not raised in Parliament. Besides what baffles me is that when the NEET/JEE and UPSC examinations were held, many universities conducted the examinations, Bihar Assembly elections were held and thousands of people gathered without masks in the public meetings, was not the coronavirus pandemic there? Now elections are going to be held in West Bengal without any restrictions, so isn’t that state affected by the coronavirus pandemic?

That state too is affected by the deadly virus but still events are being held! Hence I feel that there should be a winter session of Parliament as well. You can close the temple, mosque, church and gurudwara, but the temple of democracy must be open even in the coronavirus period as well. This is a temple connecting the hearts. Our Parliament is a symbol of people’s feelings and desires. It is a temple of our unity, equality, justice and expression which can never be closed. When the Emergency was imposed in the country, even though the Lok Sabha was dissolved, the Rajya Sabha was not closed.

The Parliament session is convened so that a solution to the burning questions facing the country is found. At present, the country is facing the challenge wrought by coronavirus pandemic and solid assurances should reach the people through Parliament. For more than three weeks, the farmers of Western Uttar Pradesh along with their counterparts from Punjab and Haryana have gathered at the border of Delhi. After all, their demands must be considered in Parliament so that some solution could be found! There is an urgent need to resolve the problems faced by the farmers. If we do not hold a session of Parliament, how will they be discussed? Already, inflation has broken the back of the common man. The skyrocketing prices of diesel, petrol and LPG have created a chaos.

The steeply rising prices of steel and cement are shaking the infrastructure sector badly. Where should these topics be discussed? I believe that the problem that existed yesterday, is still there today and will remain tomorrow too, but that does not mean that there should be no discussion on inflation. After all, the government has a majority, people have reposed their confidence in it. Just because the Opposition is weak it doesn’t mean a Parliament session should not be held. Parliament is the place where the Opposition can put forth its point, can raise questions and keep the government under a leash. Therefore, it is very important to have every session of Parliament.

Now let’s return to September when the monsoon session of Parliament took place. Recall that the Question Hour was suspended at that time. The government said that Parliament will carry on the proceedings but there will be no question hour. This was the first time in India’s parliamentary history when the Question Hour was suspended. The government had argued that many officers have to be present to assist the ministers in answering the questions that MPs ask. It is not right to gather so many officers in the Covid period! Now think what was the usefulness of the MPs if their biggest weapon Question Hour was snatched from them? Under the circumstances, the intention of the government becomes suspect.

As for the winter session, Congress MP Shashi Tharoor even said that if there was difficulty in gathering MPs in Parliament, don’t we have enough technical capacity to organize the session by connecting MPs through video conferencing? I think that where there’s a will, there is a way. After all, during this epidemic, there have been Parliament sessions in more than a hundred countries in the last nine months. America, the country most affected by the Covid-19, saw the holding of general elections in the midst of the pandemic.

Hence if people are saying that the government is deliberately not convening a Parliament session to avoid the farmers’ agitation, then one is naturally inclined to believe it. Democracy demands that the government be transparent. Every session is a ritual of democracy. There should be no hurdle in organising it. 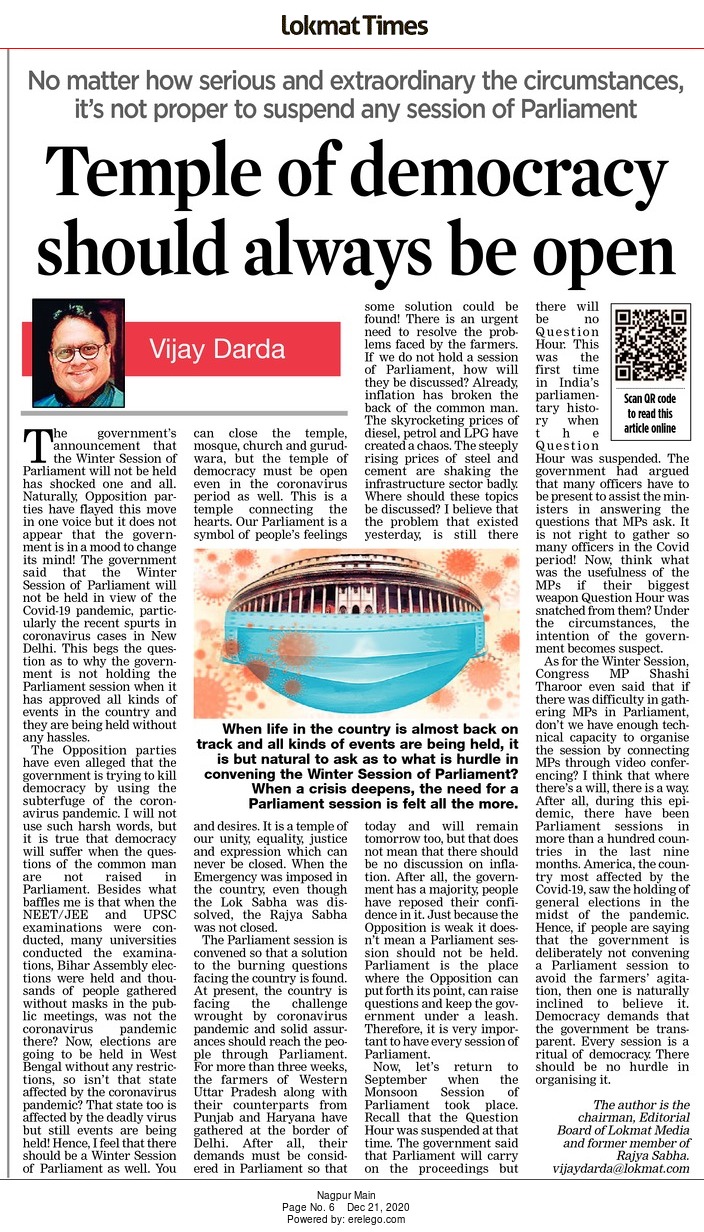