In a democracy it is a good sign when the Opposition gets ready for the next round of the electoral battle and names it’s prime ministerial candidate in advance. The people then get adequate notice about the choice they have. In 2004, the Congress was in the Opposition and though it’s president Sonia Gandhi was the clear leader, she was never projected as the prime ministerial candidate. In fact Dr. Manmohan Singh, who ultimately became the Prime Minister, had not even contested the Lok Sabha elections.

But then as the principal opposition party, the BJP has demonstrated a remarkable obsession about its next prime ministerial candidate. To many neutral observers, this appears as an exercise in futility. After all in the Westminsterial form of government that we follow, there is no direct election of the Prime Minister, and ultimately the Prime Minister has to be chosen by the elected MPs. But for the last several years, the BJP has reduced this crucial element of our democracy into a mere formality. It has been projecting a Prime Minister-in-waiting and has been arguing that the choice of the elected MPs is a mere endorsement. For nearly five years after the party lost the elections in 2004, Lal Krishna Advani  went to great lengths to project and protect his coveted status as the party’s prime ministerial candidate.  Even after the defeat in 2009, Advani has still not given up hope.

Indeed, when the Rashtriya Swayamsevak Sangh, the parent body of the BJP, advised him to take up the role of the mentor, Advani responded in his characteristic never-say-die style by referring to the efficiency of the 97-year-old actor AK Hangal who gave a shot without any retake. The message to the Sangh bosses was loud and clear. Don’t count me out of the prime ministerial race, if Hangal can do it at 97, then I am merely 85.

But the Sangh seems to have made up its mind and has come out strongly in favour of the Gujarat chief minister Narendra Modi as its next prime ministerial candidate. So, strong is its preference to Modi that it has not even hesitated to sacrifice one of its pracharak Sanjay Joshi to keep the Gujarat chief minister in good humour. Now the Sangh’s approach itself is described as hardline in most matters, and Modi is several notches above the Sangh approach and qualifies as an ultra hardliner.

One should not quarrel with the choices made by wise men. After all, they know what is best for them and their clan. The Sangh bosses have all along given an impression that they are the repository of all the wisdom that can be had on subjects such as the choice of the Prime Minister for the BJP. So, if Modi is the BJP choice for the Prime Minister, then so be it.

However, the debate over the NDA’s prime ministerial candidate is based on a lot of presumptions. In the first place, it presupposes that when the elections are held in 2014, the NDA shall get a majority, and would be able to instal its choice as the Prime Minister. Political discourse is at times based on assumptions, but at this point of time, it is too far-fetched to discuss a situation that is yet to unfold even in terms of possibilities.

Added to the presumption of an NDA victory, is the premise that the BJP’s numbers would be so strong that it can dictate its choice of the Prime Minister overriding the objections of all the allies. In real terms, the BJP needs something like 220 seats in a House of 543, to impose its choice of the Prime Minister. In any other scenario, even with an NDA majority formed by non-Congress allies, it would have to bow down to the preferences of its allies.

It is in this context that the Bihar chief minister Nitish Kumar’s pragmatic observation that the NDA needs a secular Prime Minister who can carry all sections along becomes relevant. Kumar’s antipathy to Modi is well documented, and he could be actually pitching for himself. But that apart he has enunciated a sound principle that the NDA shall do well to follow, if it actually wants to make a serious bid as an alternative to the UPA.

In the current Lok Sabha, the Congress and the BJP account for nearly 320 of the 543 seats, and the rest of the 200 plus are with other parties. It is the alignment of the others that shapes the contours of any government. For the last several general elections, the combined tally of the Congress-BJP seats has fluctuated just marginally from this 300-plus tally, and one does not see many reasons for this arithmetic to change. So, one does not see any major change that would allow the Sangh to dictate its choice of the Prime Minister.

It is also instructive to look at the past situations in which the BJP formed the government at the Centre. In 1996, the BJP did get an opportunity to form the government, but then it was a 13-day wonder as it could not get any other party to support it. It was only when it presented a much mellowed almost Congress like face that Atal Behari Vajpayee could form a coalition government that survived for nearly six years.

Political analysts are unanimous on the point that Vajpayee’s soft persona and his ability to carry all people along with him contributed to the success and longevity of the NDA government at the Centre. Vajpayee was a Sanghi no doubt, but then he could hardly be classified as the hardliner of the Modi variety. Indeed, among all the BJP leaders, it was Vajpayee alone who had the wisdom and the stature to advise Modi that rajdharma should be followed in the wake of Gujarat 2002 riots.

Clearly, when Nitish Kumar talks of a secular Prime Minister for the NDA his preference is for a Vajpayee brand person, even if happens to be from the BJP. The NDA’s choice of the Prime Minister has been agitating the people’s mind for quite some time, because unless there is a clarity on the subject, the unease in the polity would also unsettle the people. A functional democracy, needs to have a strong well defined Opposition formation as well. Even if it does not succeed in its project of grabbing power, it has to keep the ruling formation on its toes. Advani may not have succeeded in becoming the Prime Minister, but at least his criticism of the Prime Minister kept him going. 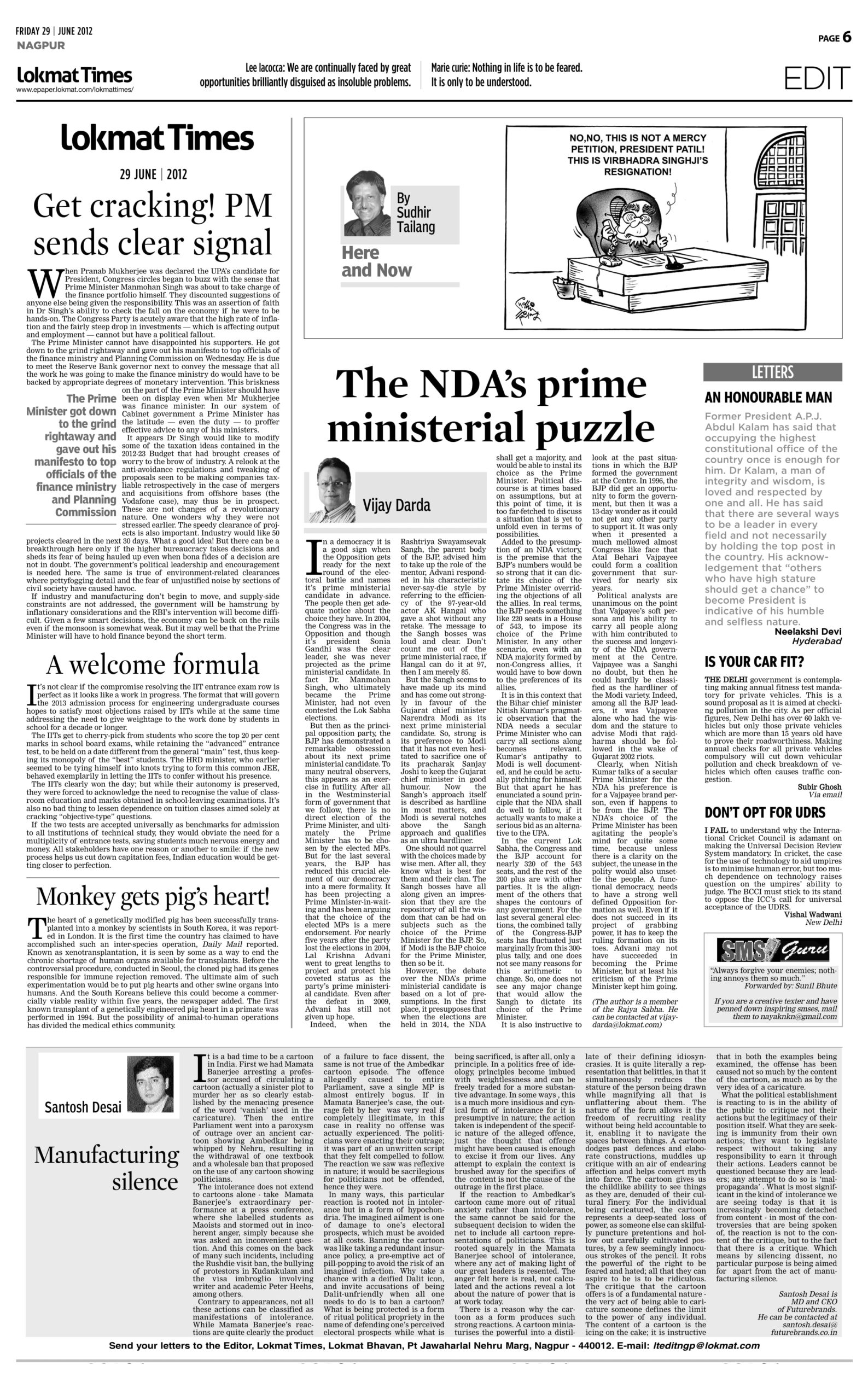 Looking ahead for smoother ride in 2017