Chairman of editorial board of Lokmat Media and former member of Rajya Sabha Vijay Darda called on Union minister for surface transport Nitin Gadkari on Sunday and discussed on various developmental works with him.

Vijay Darda also urged Nitin Gadkari to ensure the extension of the Nagpur-Wardha Broad Gauge Metro — under Corridor 1 — up to Yavatmal.

After completing the work of Wardha-Yavatmal-Nanded railway route at the earliest, the broad gauge metro can be run on the route, Darda suggested.

During the course of the discussion, Darda told Gadkari that some hospitals have been allotted oxygen plants by him.

“It is high time that all the hospitals of Nagpur city be instructed to install their own oxygen plants compulsorily,” Darda said.

Darda also said the Central government needs to chalk out a proactive national policy for installing oxygen plants in all the hospitals of the country.

Darda said, for the first time, all the citizens of India have realised how important oxygen is during the second wave of Covid-19.“Now, there is a need to manufacture oxygen from air through the available technology to meet our demand in case of emergency,” Darda said.

He also said the hospitals which were aided and assisted by the government during the pandemic period should pass on the benefits to the poor and needy. 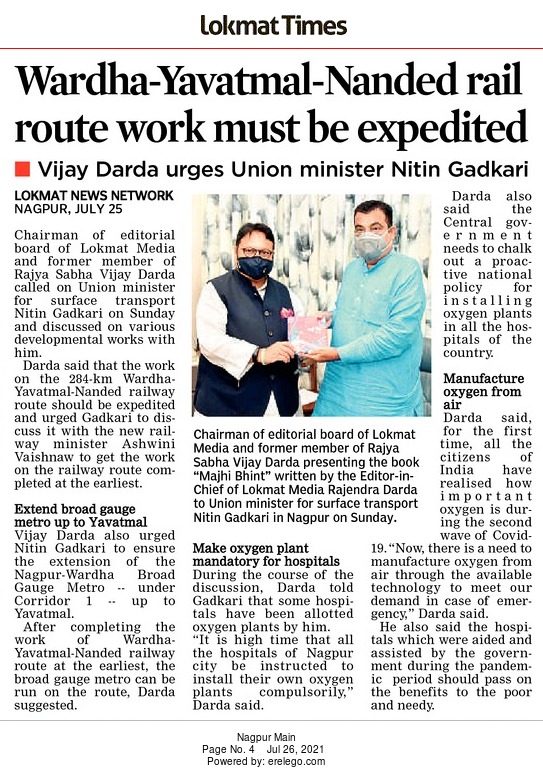