What has Congress done?

All the parties have contributed to the progress of the country in their times, but some people are asking an absurd question

I vividly remember an anecdote from Atal Bihari Vajpayee’s days. When he came to power, he found that Nehruji’s photograph in the corridor of Parliament was missing. He immediately asked who removed the photograph. Nobody took responsibility, but the next day the photo was back in its place. When Nehruji was the Prime Minister, he used to give every opportunity to Atalji to speak though the latter was in the opposition. Today’s politics is exactly opposite. There is no respect left for each other – now everybody is trying to defame the other. The white lie is being uttered freely. The leaders forget that the people have grown wiser and know everything.

One such white lie is becoming a part of the country’s politics these days. The senior leaders of the BJP are claiming that there had been no development during the Congress rule. Only BJP is bringing about development! The question crops up: If the Congress did nothing in its long tenure, how did the country reach to the present height? Why do not these people remember that when the country became free, we had nothing worthwhile to boast about. Was it an easy task to get the country into today’s situation? We should be thankful to Pt. Jawaharlal Nehru who outlined the development of the country from the perspective of industrial revolution and science. He promoted the idea within the country that factories are the modern temples of development. Who can deny that it was of Nehruji’s vision that today we identify ourselves as an industrialised country. It is the gift of Nehruji to us all.

How can we forget Lal Bahadur Shastri, who gave the slogan of ‘Jai Jawan, Jai Kisan’. At his call, the country had given up one meal at a time. How can we forget the Iron Lady, Indira Gandhi, who dreamt of laying a network of roads in this country and building a large number of bridges on the rivers and she fulfilled that dream. The country is fast moving forward. Can we forget Rajiv Gandhi’s contribution for the modern means of communication? Can we sideline Sanjay Gandhi, who dreamt of the automobile industry? Can we forget Chaudhary Charan Singh who brought the farmers to the ground. Can we forget Chandrashekhar who got the country out of the financial crisis? Can the contributions of Inder Kumar Gujral, who improved India’s relations with the countries around the world or Manmohan Singh who opened the path of economic growth, be underestimated?

How can one forget the contribution of former PM Narasimha Rao to steer the nation on an open economic policy when the country was passing through a delicate economic situation? I remember the poverty in the country when the poor could not afford two square meals a day. Congress had guaranteed work for at least 100 days. There were no hospitals and there were no medicines. There were no medical equipments to check up on the patients. There was no way to know how the people died from the disease! There were no roads. When I used to go to my grandmother’s house in my childhood, I used to travel the whole day to reach there. Today, the distance is not more than one and a half hours. Will Atalji not be remembered for laying the network of roads?

Those who are saying that the Congress did nothing should remember that what was the condition of the country after Independence. We did not have enough food to eat, let alone fruits. At that time if someone bought fruit, people would ask who is sick in the house? Bringing the country out of such poverty and putting it on path of progress is not a child’s play. Congress has been instrumental in bringing about this progress.

Congress took the crucial decisions like the right to information, the right to food and the right to education. Today, we see the proceedings in Parliament directly. Congress has done all this and much more. And as far as nationalism is concerned, Indira Gandhi did not care about the whole world, the way the Pakistan was divided into two. It was the act of great courage and valour. Nearly one lakh army men of Pakistan had surrendered!

How can anyone say that the Congress has done nothing! It’s a strange logic! Everyone has the right to highlight their own achievements, but the attempt to defame others is highly dispicable. If Modiji is doing a good job then we all should accept that yes he is doing well. I am a Congressman but if Chief Minister Devendra Fadnavis or Union minister Nitin Gadkari is doing a good job, then I will have to accept that they are doing well.

Our ideology can be different, but this does not mean that we should malign others or forget them! This is happening today because of which the society is on the verge of social breakdown. Keep in mind that if there is no atmosphere of peace, sense of belonging and harmony in society then what kind of ambience will there be at home? We have to understand that whatever is here is right here. It is very important to remove the fog of suspicion that has settled over the country. It is the responsibility of politics and politicians.

The senior leaders of the BJP are trying to spread the myth that nothing substantial happened during the Congress regime. If this is not a white lie then what else is? To enhance your name and fame, it is not correct to taint the reputation of others. Had the Congress not done anything, would the country have achieved the present level of progress? 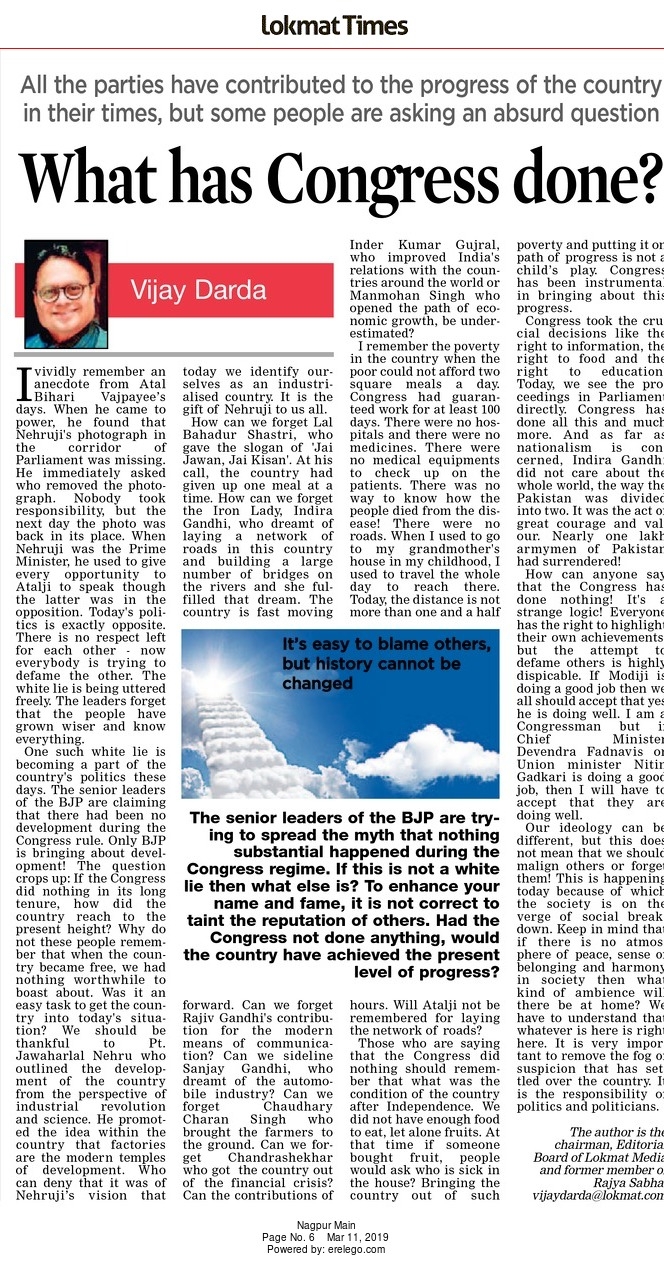 This election has shaken the roots of fair play!

Pranab Da is outspoken and committed to diversity