Where do explosives come from in our country?

When the massive explosion rocked Beirut, prima facie it appeared to be a terrorist act. However, the investigations revealed that 2,700 tonnes of ammonium nitrate was stored at this port for the last six years. It caught fire and the massive damage it subsequently caused is there for all to see. More than 150 people died, more than 4,000 were seriously injured and nearly two lakh people became homeless. Their houses have either been completely destroyed or become too risky to live in. Initial estimates put the cumulative loss at about $15 billion.

It has now been proved that the blast was the result of negligence in the maintenance of explosives, so people are very angry and the entire cabinet there was forced to resign. The Beirut explosion has shaken all those countries which have stockpiles of ammonium nitrate. India is also one of them. In 2015, 740 tonnes of ammonium nitrate was seized at the Chennai port as the company which had ordered it did not get permission from the government for import. After seizing this explosive, the government may have forgotten it. There is a residential area barely 700 metres from the place where it has been stored and about 7,000 people live there.

As soon as the explosion took place in Beirut, the officials in India got alarmed and in a hurry, 200 tonnes of ammonium nitrate was shifted to Hyderabad after it was bought by a company. The question is why it was kept in containers in Chennai for the last five years. Why it was not disposed of? Perhaps the reason for this seems to be that the authorities could not realise its serious consequences.

Actually, ammonium nitrate is not an explosive in itself but acts as an oxidizer, increasing the strength of the explosion manifold. What can happen if it is aided by fire was seen in Beirut. It can explode if exposed to excessive heat. Ammonium nitrate is an industrial chemical that is also used to make manure. There are some guidelines under the Explosives Act to store ammonium nitrate. For example, it is stored in an open and ventilated place where it is not exposed to water or sunlight. The United Nations has also classified it in the list of hazardous material. It is obvious that the way it was kept in Chennai was not safe. It is good that safety arrangements are being made now.

The question is not only about this ammonium nitrate in Chennai. The question is why are we so negligent in storing explosives and how it becomes so easily available in the market? These are the two major questions that the government should focus on. First of all, there is negligence in the storage of explosives. No year passes when incidents of fire due to firecrackers are not reported in different parts of the country and people do not die. There is a place called Sivakasi near Chennai where more than seven lakh workers are engaged in manufacturing firecrackers. Around 90 per cent of the firecrackers are supplied from this place to the rest of the country. The explosives used in firecrackers are not available without licence. But several incidents of fire have proved that the explosives are supplied through illicit trade more often than not. It is not only about Sivakasi. In Gurdaspur (Punjab), 25 people were killed in a fire in an illegal fireworks factory in a residential area. Such incidents have happened in Uttar Pradesh, Odisha and even Delhi. This is the result of being negligent towards the hazardous explosives.

Now look at the easy availability of the hazardous explosives in the market. Gelatin sticks are used indiscriminately to blast mountains, make a hole in the ground or demolish buildings in cities. If you want to buy gelatin sticks, it is not so difficult. These sticks are often used by the terrorists and the Naxalites to carry out blasts. You might remember the 2017 incident when the gelatin sticks packed in sand sacks in Petlawad, Madhya Pradesh, exploded, killing more than 100 people. Gelatin sticks are also used as bomb triggers. An example of how easily explosives can be obtained in our country was seen this year only when a person fed an explosive to an elephant.

Moreover, the way the terrorists and Naxalites often use improvised explosive devices shows that they have no problem in obtaining explosives. However, it is surprising that our government has failed to check the illicit trade of explosives. We will not be able to keep ourselves safe until we strictly control the illicit explosives trade and store the explosives safely. Alertness is crucial to ensure safety.

A stockpile of ammonium nitrate is stored in Chennai too just as it was in Lebanon’s capital Beirut. So the question is: Is it in safe condition? And the second most important and serious question is where do the explosives come from in our country? 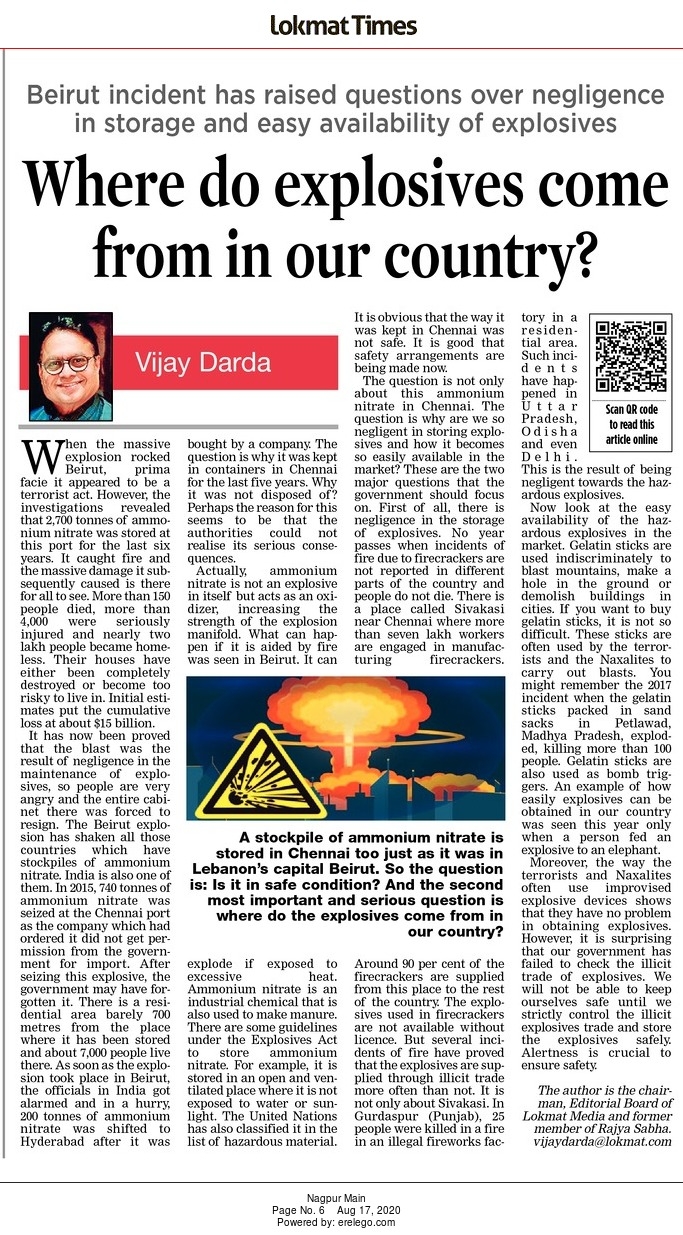