Will ‘secular’ parties be able to fight RSS and BJP?

Unstable Congress and weak Opposition… and our secular country creaking under its weight!

The BJP grabbed the attention of the entire nation for the way it contested the Greater Hyderabad Municipal Corporation election. This was for the first time that the national leadership of the BJP had deployed its full strength in a municipal corporation election. During the election, I asked Devendra Fadnavis why bigwigs like Amit Shah and JP Nadda are campaigning for local elections, and even you are campaigning and many MPs are also engaged in this electioneering! To this, he replied that even if we may not emerge as the largest party there, we will definitely bag a respectable number of seats and increase our vote bank. The result of this belief is that the BJP which earlier had just 4 seats, not only won 48 seats but emerged as the second largest party too. It reduced the TRS from 99 to 55 seats.

Actually, BJP’s working style is quite unique. It is not the old Jana Sangh but a Bharatiya Janata Party which was nursed by veteran leaders like Atal Bihari Vajpayee, Lal Krishna Advani, Murli Manohar Joshi and is being led by a strong leader like Narendra Modi today. He is the supremo and his strategy is akin to Krishna in Kurukshetra who went on to defeat everyone. There is no stopping or deterring Narendra Modi. His style of functioning is a challenge for everybody. Indira Gandhi had once achieved this feat of decimating the Opposition.

At that time, it was ‘One verses All’ and the situation is the same even today too. The Rashtriya Swayamsevak Sangh sarsanghchalak Mohan Bhagwat and Narendra Modi are working together with a strategy. It seems as if the duo has taken a pledge to saffronise the entire country. Mohan Bhagwat has made the Sangh a modern organisation without compromising with the policies and ideology. This has increased acceptance for Sangh rapidly. There was a time when the media used to talk about the Sangh in a muffled voice.

Sarsanghchalak’s annual address would be published in a single column somewhere. Today, it makes the main lead and TV channels have started airing his address live. The Sangh is never hesitant to take decisions in accordance with the changing times. Narendra Modi’s strong leadership has changed the adage of the icing on the cake. He told Lal Krishna Advani, Murli Manohar Joshi and all the elderly leaders like them that they deserve respect but the new team has to be brought in. He took unmatched decisions and appointed leaders like Rajnath Singh, Nitin Gadkari and J P Nadda as party presidents and honed their leadership.

You or we may disagree with the ideology of the Sangh, but the truth is that there is no other organisation like it. The Sangh is the training ground for the thoughts and conduct of the BJP. The Sangh makes serious and long-term plans. Their network is working not only in the country but all over the world. A few years back, I was sitting with a friend of mine in Switzerland when he got a call inviting him to a mega camp of RSS organised at Lake Lugano. I was surprised; Sangh is working here too? My friend told me that the Sangh organises such programmes regularly. Their pracharaks keep visiting regularly. I saw the same thing in London, Europe and America. Now look at India itself. Did anyone think that the Sangh will make inroads in the North Eastern states and the BJP will be in power there. Today, BJP is in power or is in power in all the North Eastern states. Now BJP’s target is states like West Bengal, Odisha, Andhra Pradesh and Telangana. In Kerala and Puducherry, the Sangh is gradually making inroads.

The fact is that there is no one who can stop the BJP at the moment. The Congress is caught in its own web. If it has a government in Rajasthan or Punjab, it is not because of the Congress but because of the personal charisma of regional satraps like Ashok Gehlot and Amarinder Singh. In Madhya Pradesh, had the party leadership listened to Kamal Nath and given him free hand, not allowing interference from Jyotiraditya, there would have been a Congress government today for sure. But the Congress leaders are busy settling their personal scores. Sharad Pawar has said that Rahul Gandhi lacks consistency. He has also said that though his is a regional party, it will fight together to keep democracy and secularism alive. The Congress should take the responsibility to stitch together a strong Opposition, being the only party with presence in the entire country. It is the Congress that can save the secular fabric of the country. But for this, the Congress will have to start anew and strengthen itself.

It is said that despite all problems, the Congress has decided to unanimously hand over the reins of the party to Rahul Gandhi. The fact is that due to lack of leadership in Congress and out of frustration, the party men have started joining BJP. Many of them have already quit. When will the Congress wake up and take the bull by the horns? The common people are looking up to Congress to save the secular fabric of the country.

Narendra Modi has given the slogan of Sabka Saath Sabka Vikas. It is a different matter that people associated with that ideology are not ready to accept it. Often, they indulge in communal activities. So bear in mind that the fabric of this country rests on secularism which is being dented. How ironic that some people are calling ‘Kisan movement’ a ‘Khalistan movement’? Unfortunately, healthy thoughts are vanishing into thin air. The history of the world says that in countries where ideas have been shattered and power is confined in the hands of one party, democracy suffers. Opposition must be strong for a healthy democracy. This is the soul of democracy. However, the horse of BJP’s ‘Ashvamedha’ is galloping fearlessly..! Who will stop it? 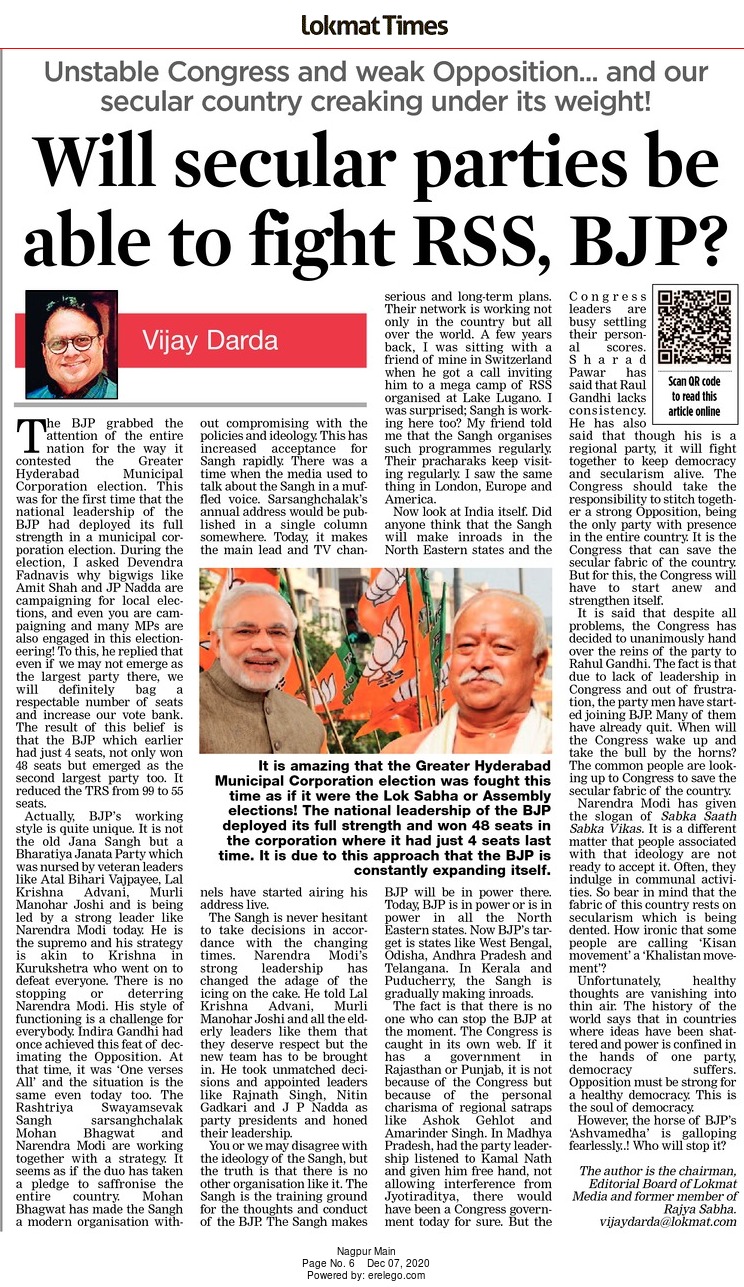 Is it the Modi wave or the Opposition weakness ..?