If Yoga is taught to the children from the age of three, they will grow strong and healthy

The world celebrated International Yoga Day on June 21. It is in this context that a timely and elaborate discussion was held, first with Sri Sri Ravi Shankar ji, founder of the Art of Living and crusader of peace and brotherhood in the world, and then with the Yoga Guru Baba Ramdev ji who has taken the pledge to make the whole world healthy through Yoga at a webinar hosted by Lokmat Media. I asked both of them that since the importance of Yoga is scientifically established and it is being studied in Europe and other countries of the world, why is it not being included in the school curriculum in our country? Why Yoga should not be taught to the children right from the age of three? What are the problems?

Both maintained that yoga should be a part of our life. Sri Sri said Yoga should be made compulsory not only in schools but also at all the workplaces. Since employees reel under stress at work, Yoga practice should have been started at workplaces by now. Why is it so late? Baba Ramdev ji said, quite rightly, Yoga is not a part of any religion. It is for everybody and everyone should take to it. If Yoga is practised in every household, nothing can be better.

The word ‘udyog’ (industry) also came up with Yoga during conversation with Baba Ramdev, for he has also carved out a niche for himself in business and industry. He is credited with forcing national and multinational companies to enter the field of Ayurvedic products. Both Yoga and industry are the paths on which our country can achieve economic self-sufficiency along with health and wellness. The problem is that not only our country but also other countries of the world are constantly getting weaker (or being weakened deliberately) in terms of health. People have become weak with poor resistance power, as a result of which Covid-19 pandemic killed lakhs of people across the world. Those with sturdy power of resistance staged quick recovery. People with low immunity have fallen prey and will continue to succumb to viral illnesses like SARS, chikungunya and swine flu from time to time. I know many people who spend more on medicines than grocery every month.

If Yoga is made part of our daily life, it will boost our immunity and our body will be able to fight viruses. Yoga and Ayurveda are able to keep a person healthy, but unfortunately the international nexus of allopathic medicine is so powerful that it has suppressed Ayurveda, Unani and homeopathy. The pharmaceutical companies manufacturing allopathic medicines are so powerful that the World Health Organisation is like a dumb doll under their pressure. The 2018 figures show the annual turnover of medicines at over Rs 91 lakh crore worldwide and the annual growth rate is 6.3 per cent. Medicines costing Rs 1 are being sold for Rs 100. I think a nexus is at work that attracts people to junk food so that people get sick after eating unhealthy food, then take medicines and get caught in medical insurance trap too!

The question is if China can develop its system of medicine, why can’t we develop one of our own? Our legacy of Yoga and Ayurveda is very ancient. We have taught Yoga and ‘pranayam’ to the world. If we adopt these mediums completely, we can save crores of rupees spent on healthcare and use them to strengthen the society. After all, this money belongs to the taxpayers only!

Prior to Baba Ramdev ji, the name of Yogacharya Bellur Krishnamachar Sundararaja Iyengar ji was mentioned with great reverence all over the world. Just after the First World War, he gave the message of wellness to the world. He established a new genre called Iyengar Yoga. The American Yoga master Tao Porchon-Lynch, who has been recorded in the Guinness Book as the oldest 98-year-old yoga teacher, also learned Yoga from Iyengar ji. China had also conferred its highest civilian award on Iyengar ji. Realising the importance of Yoga, Queen Mother of Belgium invited him in 1958 and learned Shirshasan from him. Many more greats like J Krishnamurti, Jayaprakash Narayan and Sachin Tendulkar have been disciples of Padma Vibhushan Iyengar ji.

Bihar School of Yoga in Munger is doing spectacular work in the field of Yoga. Apart from this, there are old nurseries of Yoga in many other places. Rishikesh has become famous as Yoga Capital. But we need to think how far we are able to carry forward such a great legacy. Yoga also enriches our values. People like Appasaheb Dharmadhikari, Prahlada Pai and Annasaheb More have deepened the roots of culture in our society. We should also carry on their legacy. Our Prime Minister Narendra Modi himself does Yoga. His predecessors, Pandit Nehru, Morarji Desai, Indira Gandhi and Rajiv Gandhi also used to do Yoga. Despite all this, the denial of government patronage to Yoga comes as a surprise! I asked Baba Ramdev ji why is it so? His answer was, Modi ji is a little hesitant in taking decisions.

As of now, we are again gushing about Swadeshi and retching up rhetoric against Chinese goods and boycotting them. Though we speak about Make in India and Made in India, do we have such a system that we can face China and multinationals? There are some industrial houses in our country that have international credentials. Verily, companies like Patanjali, Dabur and Vicco are competing successfully but this competition is going to be very long. I have written many times in this column that we have to ease our policies to allow the industries to develop and stand competition from multinational companies. Only when our own industries grow, will the nation become self-reliant. The reality of the present era is that only Yoga and ‘udyog’ (industry) can make us a global power. Therefore, let the children be accustomed to Yoga before they become addict to medicines. So make Yoga and products of our own industries a part of life. It will make us healthy and happy!

It goes without saying that Yoga and ‘udyog’ are the paths on which we can not just keep the body and mind healthy but also help ourselves become financially stronger and make the nation self-reliant. We should incorporate yoga in the school curriculum now. Parents should also ensure that their children become accustomed to yoga early on. 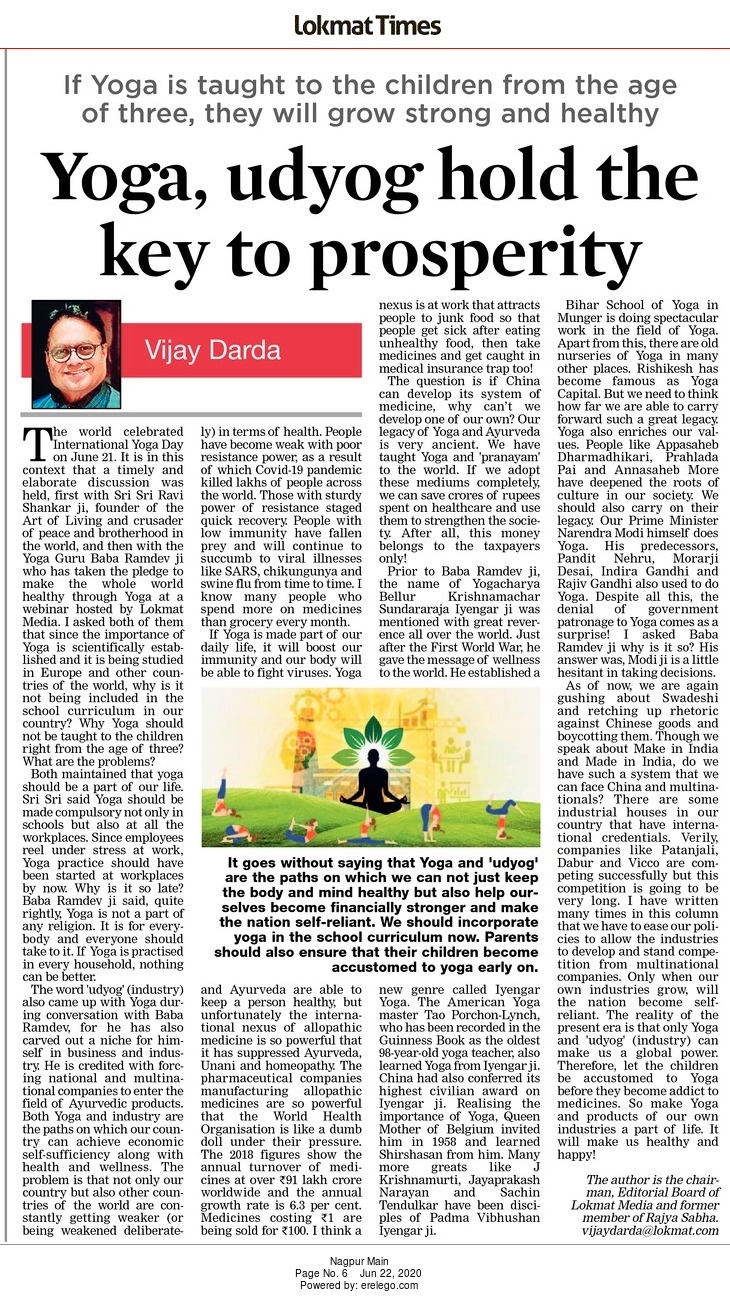