Whenever polling day arrives, I remember Shyam Saran Negi ji. Negi ji is a resident of a village named Kalp in Mandi Lok Sabha constituency and Kinnaur Assembly constituency in Himachal Pradesh. He is more than 100 years old. I remember him because he is registered as the first voter of Indian democracy. Though the first Lok Sabha election was held in India in 1952, the citizens of Himachal Pradesh got a chance to vote five months ahead of schedule, in October 1951 that is, because it becomes difficult to move in remote areas after snowfall. Negi ji voted for the first time on October 25, 1951 and since then he has maintained the continuity. I think we all should follow Negi ji. Irrespective of the circumstances, we must go to vote!

We need to bear in mind that the biggest power of democracy is our vote. When we exercise our franchise, we not only vote for the development of our region but also to strengthen the democratic system of the country. We choose a representative who will live up to our aspirations and play a role in making the life of the common man easy. Many people ridicule politics and say why should we get involved in it. They avoid voting by proffering this excuse. The point is that if you do not vote, it means that you are not involved in the administrative system of the country. In that case, you should not even have the right to complain! You will have to elect an able representative to realise your dream of an ideal state or the country. After all, only elected people’s representatives run the government. So how can you shy away from voting? The Constitution has given you the right to vote and therefore, it is your duty too.

Prior to 1988, the eligible age for voting in our country was 21 years. But in view of the spread of education and awareness among the people in the country, this age limit was modified to 18 years through the 61st Amendment of the Constitution. One important reason for this was that the participation of youths should increase. We are happy that the participation of youths in elections is increasing consistently. Young voters are reaching polling booths. Nevertheless, it pains to note why Maharashtra does not figure among top states in terms of voting?

We all see Maharashtra as a developed state, but statistics show that we do not come in the top 10 states in terms of voting percentage. We record voting somewhere around 60 per cent, while in a small and geographically more inaccessible state like Nagaland, the voter turnout is between 87 and 88 per cent. Even in the states like Lakshadweep, Tripura, Dadra and Nagar Haveli, Puducherry and Assam, the voting is invariably over 80 per cent. The question is why are we not able to attain these figures? The simple reason for this is the laziness of the people. They think even if they do not go to vote, what difference will it make? I consider such thinking very dangerous for democracy. If every person starts thinking like this, the participation of common man in governance will be less. Therefore, it is very important that you go to vote. Vote for the candidate you like, who can represent you in the right way.

I am worried that many people are unable to cast their votes only because they are out on duty that day. This is the era of technology and the Internet, and the Election Commission should make such an arrangement that voters can cast their votes irrespective of where they are. Such a system should be in place from the next election! Voting is compulsory in many countries of the world. These include Australia, Argentina, Belgium, Brazil, Singapore and Switzerland. There is a provision of penalty for not voting in elections. This demand is gaining ground in India too. However, there is not much discussion on this aspect. I believe there is a need to make the citizens aware of the importance of voting. Now the youths will have to bear this responsibility of creating awareness. They should play the role of activists for Election Commission. On polling day, ask everyone in your neighbourhood whether they have cast their vote. If not, they must reach or be taken to the polling station. So, I request you to go to the polling booth today and vote!

Voting to elect the 14th Legislative Assembly of Maharashtra will be held today, and it is the duty of each one of us to exercise our franchise. The strength to fulfil our aspirations is hidden in our votes only. Our vote restores our development, our glory and our security. 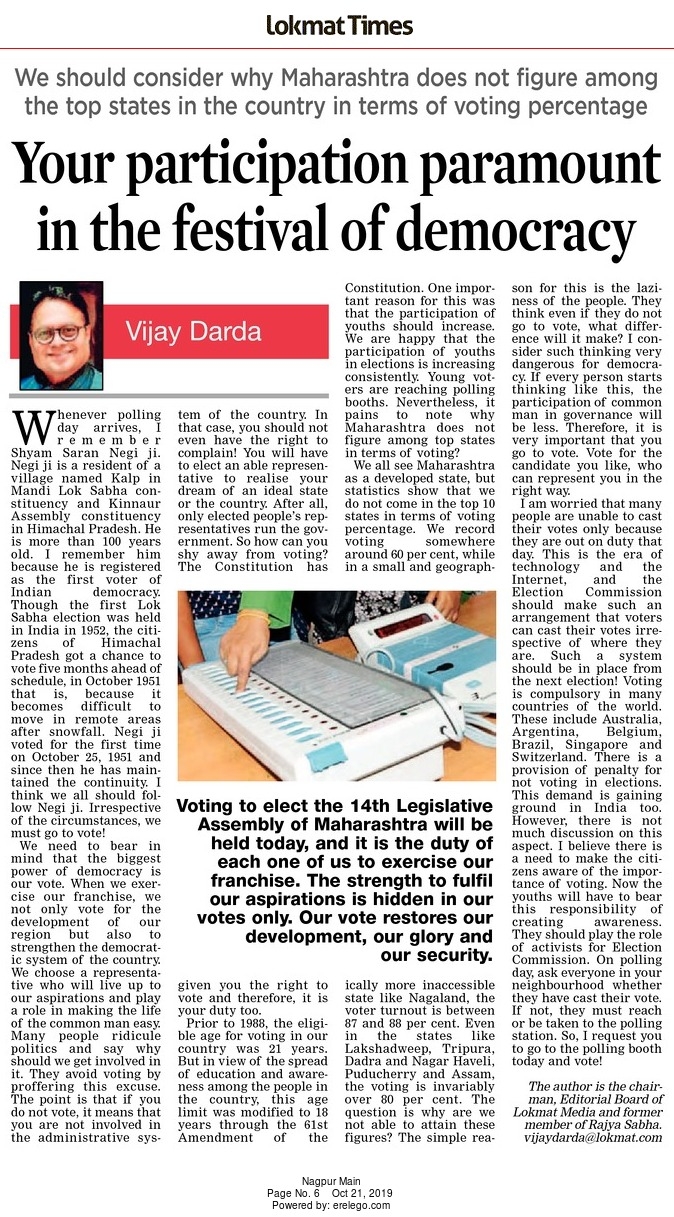