The high democratic ideal of a government, of the people, by the people and for the people places a great responsibility on the people. They have to use their collective sovereign power wisely when electing a government. Through more than six decades of working with the largest democracy in the world, and at times surprising the entire world by their maturity, the Indian voters have developed an impressive and enviable track record. The transition of power from one regime to the other has been almost seamless. This has been irrespective of the political nature of the mandate.

But then one of the main problems that has been witnessed by our democracy is the large number of political parties, and the consequential fractured mandate that has been delivered by the electorate for the last 30 years. Indeed, 1984 was the last time when the Congress-led by Rajiv Gandhi got more than 400 seats in the Lok Sabha. After that there have been seven prime ministers beginning from V P Singh down to the incumbent Manmohan Singh. All of them have led multi-party coalition governments. By contrast, the mandate at the state levels has been pretty decisive in the same three decades, and the winners have bagged big victories. In sum, whereas the two-party system does seem to have emerged at the states, this much cherished ideal that keeps the competing political outfits on their toes has been missing at the national level. As a result, a change in the ruling party has not made much of a difference on substantive governance issues.

To fulfil the aspirations of more than a billion people is a complex task under any situation. The challenge is redoubled when all the different contrasting features of the Indian society tend to act at cross-purposes. Over the years there has been a sustained criticism of the failure of successive governments to create an atmosphere in which the full potential of every citizen is realised. This indeed is the essence of empowerment. But to be fair to the political masters, a large part of the failure is also due to the fractured mandate that is handed over by the people to the governments. True, the people’s message to the political masters is clear, sink your petty politics and work in national interest, but then if we had been such a nation of sensible people this would have been a different world.For all we know, the coalition era is here to stay. No party on the political horizon has either the following or the organisational muscle to command a majority on its own in the Lok Sabha.

This fundamental reality is accepted by all the political parties, and thus witness the haste of even those who claim to be riding a tsunami of popular support to embrace political parties that did not have a single member in the outgoing Lok Sabha. Or the other phenomena of a fledgling political party’s actions sending waves of panic among entrenched leaders in their own fiefdoms. It is the strength of the democratic process that it can absorb these shocks. But the people have to choose wisely and deliver a verdict that has a natural harmony once it is pronounced. It has happened in the past when the people have delivered governments that did not last their full term, and the nation paid its price on the learning curve. But then they got over the sentimental phases and voted solidly to elect stable combines.

It is in this context that the participation of every eligible citizen in the voting process assumes critical importance. The Election Commission needs to be commended for its intensive work in improving voter mobilisation through recent state assembly elections that witnessed high turnouts even in areas that have boycotted calls from the Maoists. But the refusal to embrace technology to enhance the voter participation by adding features like e-voting, early voting, postal voting etc. for voters who cannot come and present themselves at the polling booth on the appointed day is a serious flaw in the system that deprives millions of their basic right to vote. Even in the face of criticism, we have accepted the electronic voting machines, and made several additions with the latest being the “NOTA” (none of the above) option. So, it is pretty difficult to see the logic of denying millions of registered voters the opportunity to vote simply because they cannot present themselves at the polling booth on the appointed day. All democracies have different practices to enhance voter participation, especially in Western countries where voter apathy is a major problem. My colleague in the parliament Naveen Jindal has been making a sustained effort in this direction especially for Indian citizens living abroad who have not accepted the citizenship of other countries. The other matter of concern is the voting right of armed forces personnel in the constituency where they are serving. Currently, they have to serve at a place for three years to become eligible for voting.

The election campaign itself brings out several interesting facets of our society, and this is indeed celebration time for our democracy. The entry of celebrities and persons from different walks of life like sports, films, law etc. also adds spice to the entire process of electioneering. The show has just begun with say one cricketer Mohammad Kaif joining the fray, and another Mohammad Azharuddin set to shift his constituency from Moradabad in Uttar Pradesh to some safer place in West Bengal, whereas the experienced Jayaprada is angling a transition from Rampur to Moradabad. This colour is spread all across the political spectrum as we have such personalities joining the electoral game in a fairly sizeable number.

But then we also know from experience that the real game of government formation shall begin only after the results are out on May 16, when the season for changing political equations shall get underway. It is then that the politicos shall do their best to rewrite the electoral verdict delivered by the masses, and the wisdom of the solitary citizen rests in ensuring that no politician howsoever smart can tamper with it. 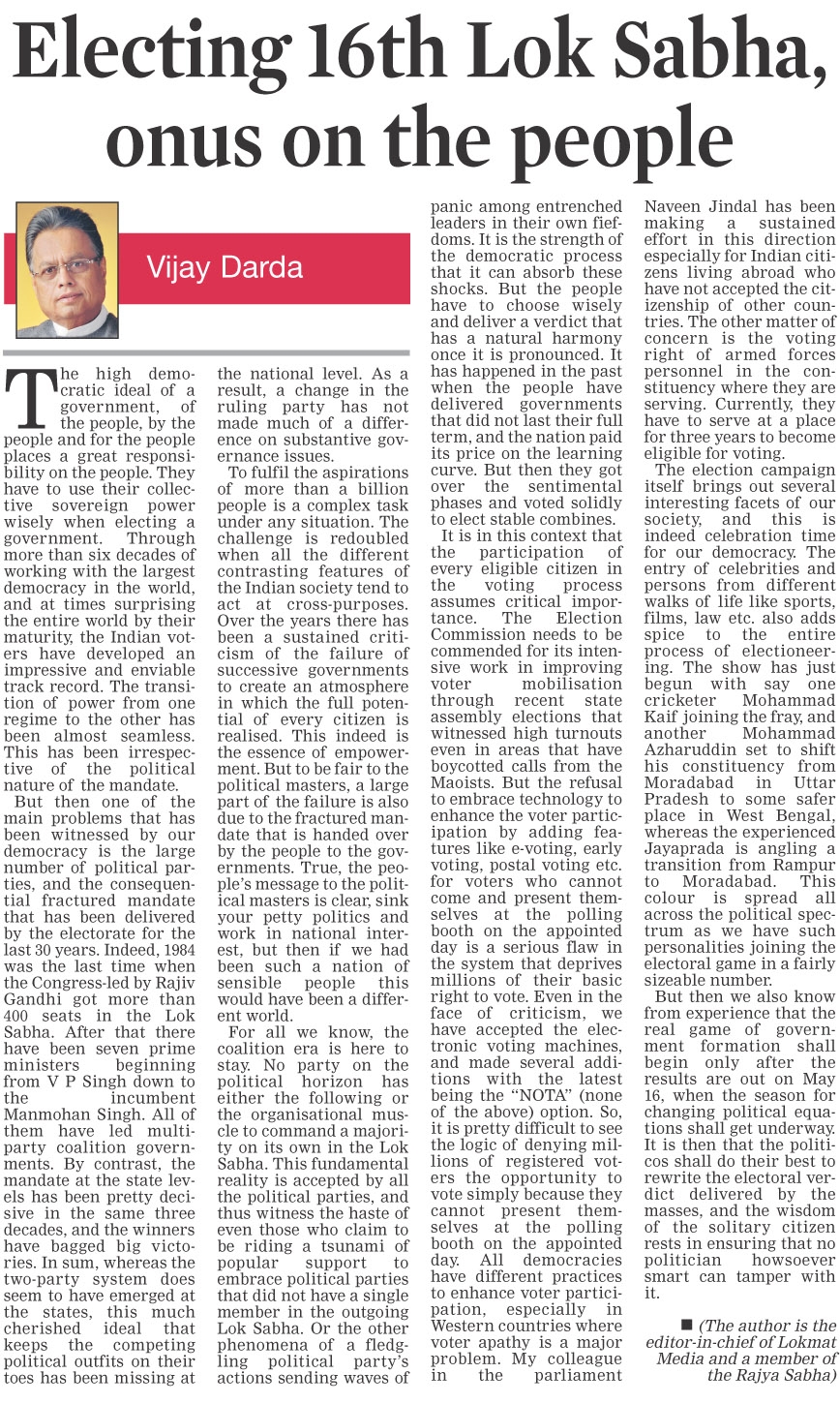