A tough road ahead for Joe Biden..!

Task of reversing Trump’s decisions begins, but is it easy to get America back on the track?

Joe Biden took over as US President in the midst of much acrimony. Outgoing President Donald Trump was supposed to attend the ceremony but he didn’t. He disappeared like an upset and angry child. There was an atmosphere of mistrust. Fear ruled the roost to such an extent that around 36,000 security personnel were deployed for the swearing-in ceremony and out of which 25,000 were National Guards. Every attendee was being frisked and questioned whether he or she was a Trump supporter. You can gauge the gravity of the situation from the fact that 13 personnel of the National Guards were removed from duty before the oath because the Federal Bureau of Investigation suspected that they were supporters of Trump and could do something at the last minute.

America has never seen this kind of mistrust in its 250-year-old democratic history! This example is enough to understand where America stands now after Trump’s four-year term and how big the challenges are for the new President. Biden also understands this and that is why within a few hours of assuming office, he reversed several of Trump’s decisions. He also said that he has no time to waste.

Now, Biden has announced that he will adopt strict measures to deal with the coronavirus epidemic. Masks and social distancing have been made mandatory. Trump kept avoiding this which led to deaths of more than four lakh people. Trump preferred to save the economy over the lives of people. He repeatedly rejected the lockdown. However, he could not even handle the economy.

Today, there is a huge problem of unemployment in America. Government statistics show that about one crore people have become unemployed and they have also applied for unemployment allowance. Providing employment for such people will be the biggest challenge for Biden.

Trump supporters’ attack on the US Congress reflects the dangers of this fundamentalism. During his tenure, Trump had an antagonistic attitude towards Muslims. Biden has tried to give a message of harmony by abolishing Trump’s Muslim travel ban, but when the wounds of discrimination arise in the society, it takes time to heal them. Many countries of the world are facing similar emotional wounds at this time. The whole world is waiting to see how Biden will deal with this situation.

Even at the global level, Trump has created such a terrible mess that it will take Biden a full term to clear and fix it. The decision to rejoin the Paris Climate Agreement and rejoin the World Health Organisation is certainly a good step by Biden. Trump had left the World Health Organization and left the entire field to China. At this time, WHO is completely under Chinese control. How the US will normalise the situation, it is difficult to say because China is in an aggressive mood everywhere. To carry forward its expansionist policies, it is also continuously attacking the US in various ways. The day Joe Biden was sworn in, China banned 28 officials in key positions during Donald Trump’s tenure from entering China. These people will not be able to go to Hong Kong or Macau either. By the way, Trump also closed the doors of the US to 14 Chinese officials last year. Now, how will Biden respond to this Chinese attack?

Here, the whole world is also eyeing what Biden’s stance will be against the background of tension on the borders between India and China. We Indians are very happy with the presence of more than 20 people of Indian origin, including Vice President Kamala Harris in Biden’s team, but how much will these people of Indian origin in America support India or be in a position to do so only time will tell!

Looking at the history, India has not gained much during the regime of Democrat Presidents. India didn’t gain anything during the presidential regimes of Bill Clinton and Barack Obama. The nuclear treaty with America took place in 2005 at the time of George W. Bush (Jr.), who was a Republican. Then Manmohan Singh was the Prime Minister of India. Trump may have antagonised the world with his antics and acts but none can deny that he strongly supported India on the issue of Chinese aggression and also tightened the screws on Pakistan to a large extent. It is expected that Biden will support India but only the passage of time will tell that!

In fact, it is not just we who have an eye on America, but the whole world is watching it because whatever happens in America affects the whole world. 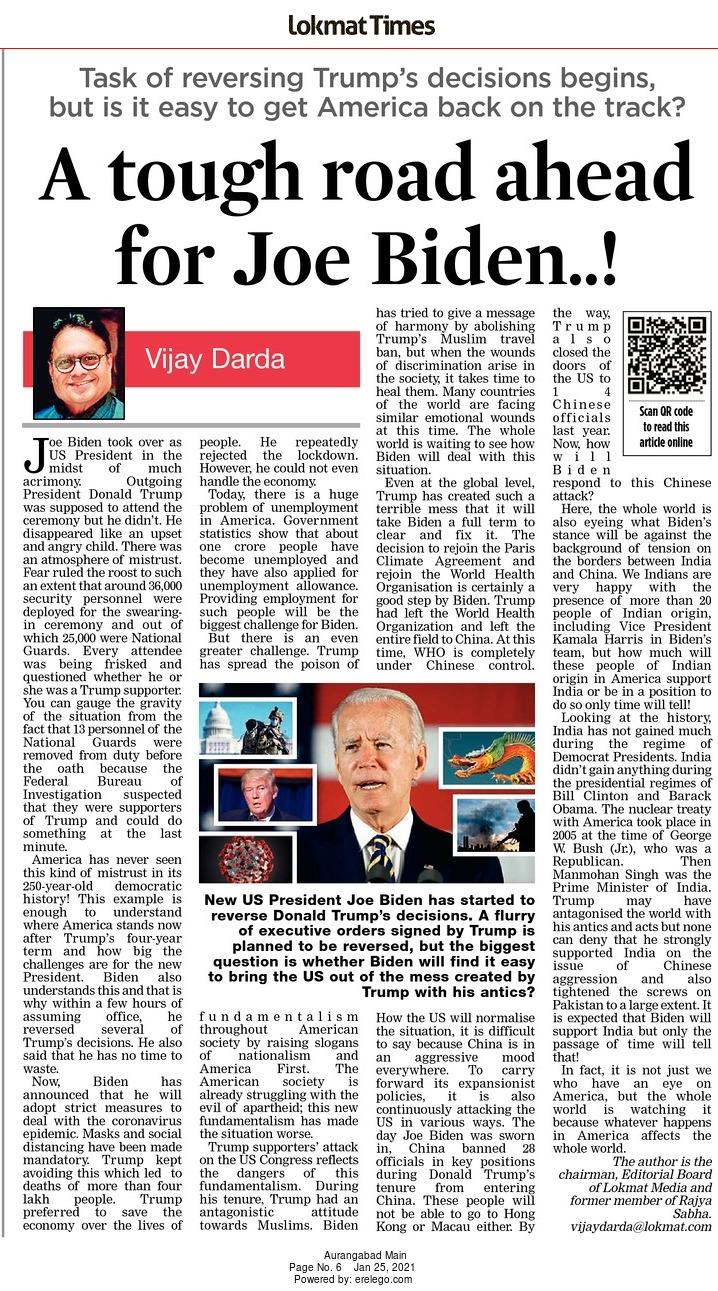