An exquisite musical treat of ‘Saptasur’

Music not confined to borders of religion, country: Anurag Thakur

New Delhi: Music and sports cannot be confined to the boundaries of religion and country. Moreover, musicians and artistes are the true ambassadors of the country in the world, said the Union Information and Broadcasting minister Anurag Singh Thakur.

The winners of the 8th edition of Lokmat Sur Jyotsna National Music Awards 2021 were honoured with a cash prize of `1 lakh, a trophy and a citation each at a glittering ceremony at Kamani Auditorium in Delhi. The winners, talented singer Maithili Thakur and young musician Lydian Nadhaswaram, were awarded the Lokmat Sur Jyotsna National Music Awards 2021 at the hands of Anurag Singh Thakur.

Speaking on the occasion, Anurag Singh Thakur said there is no restriction on artistes or sportspersons in the fields of music and sports. Caste and religion are not asked in the fields of music and sports. Relying solely on their skills, they make their mark in the world. The Lokmat Media has organised this event even during the corona period. It has provided a platform for emerging talents. The group has worked hard to find these talents. This work is truly commendable. Jyotsna Darda not only established Lokmat Sakhi Manch but also provided opportunities for women to be empowered. Thakur said the Lokmat Parivar deserves to be commended for this venture.

“Music has a unique strength,” said Dr Farooq Abdullah. Music has the power to keep people alive. The commitment of the Lokmat Media towards art is commendable. Music should sow the seeds of humanity, ‘Sarvadharma Samabhava’ and bring peace in this country, Dr Abdullah noted.

Dr Bhagwat Karad lauded the Lokmat Media and the social work being carried on by the group.

Explaining the objective of the event, the chairman of editorial board of Lokmat Media and former member of Rajya Sabha Vijay Darda said Jyotsna Darda was a music lover. She believed that music has the potential to change the society. The purpose of giving Sur Jyotsna National Music Awards is to bring forward and encourage the young and budding artistes of the country. I am more than happy that this ceremony is taking place in the national capital of Delhi this year. The entire country takes note when the artistes are felicitated and awarded in the national capital. Jyotsna Darda has set up Lokmat Sakhi Manch, an unparalleled organisation with membership of three and a half lakh women. The work of empowerment of women is being carried on through this forum, Vijay Darda further said.

At the outset, the portrait of Jyotsna Darda, the connoisseur of music and founder of Lokmat Sakhi Manch, was garlanded. The programme started with the lighting of traditional lamp.

‘Manglik’ recitation at the outset

The award ceremony started with ‘Manglik’ recitation as per Jain tradition. Famous bhajan singer Vinay Bapna recited the ‘Manglik’. The audience enjoyed the singing and playing of instruments by the winners before both of them were honoured. Originally from Bihar, Maithili Thakur performed Marathi and Hindi songs, while Lydian Nadhaswaram’s piano and drum performance enchanted the audience.

The special attraction of the Lokmat Sur Jyotsna National Music Awards 2021 was its anthem ‘Jeevan Ki Jyotsna Hai…’ The confluence of Jyotsna and Jyotsna in life… Lyricist Javed Akhtar has composed the lyrics of this anthem and the music has been composed by Pandit Jatin Lalit. Noted singers Alka Yagnik and Sonu Nigam have lent their voices. The audience was overwhelmed when they heard the anthem.

A few days back, Union Information and Broadcasting minister Anurag Singh Thakur had released the digital issue of Lokmat online. At this ceremony, chairman of editorial board of Lokmat Media and former member of Rajya Sabha Vijay Darda presented a copy of this historic issue to Anurag Singh Thakur.

Union Information and Broadcasting minister Anurag Singh Thakur said it is a great coincidence. The country is celebrating the diamond jubilee of Indian independence. Similarly, the Nagpur edition of Lokmat is celebrating its golden jubilee. This is a unique coincidence.

A symbol of ‘Sarvadharma Samabhava’ 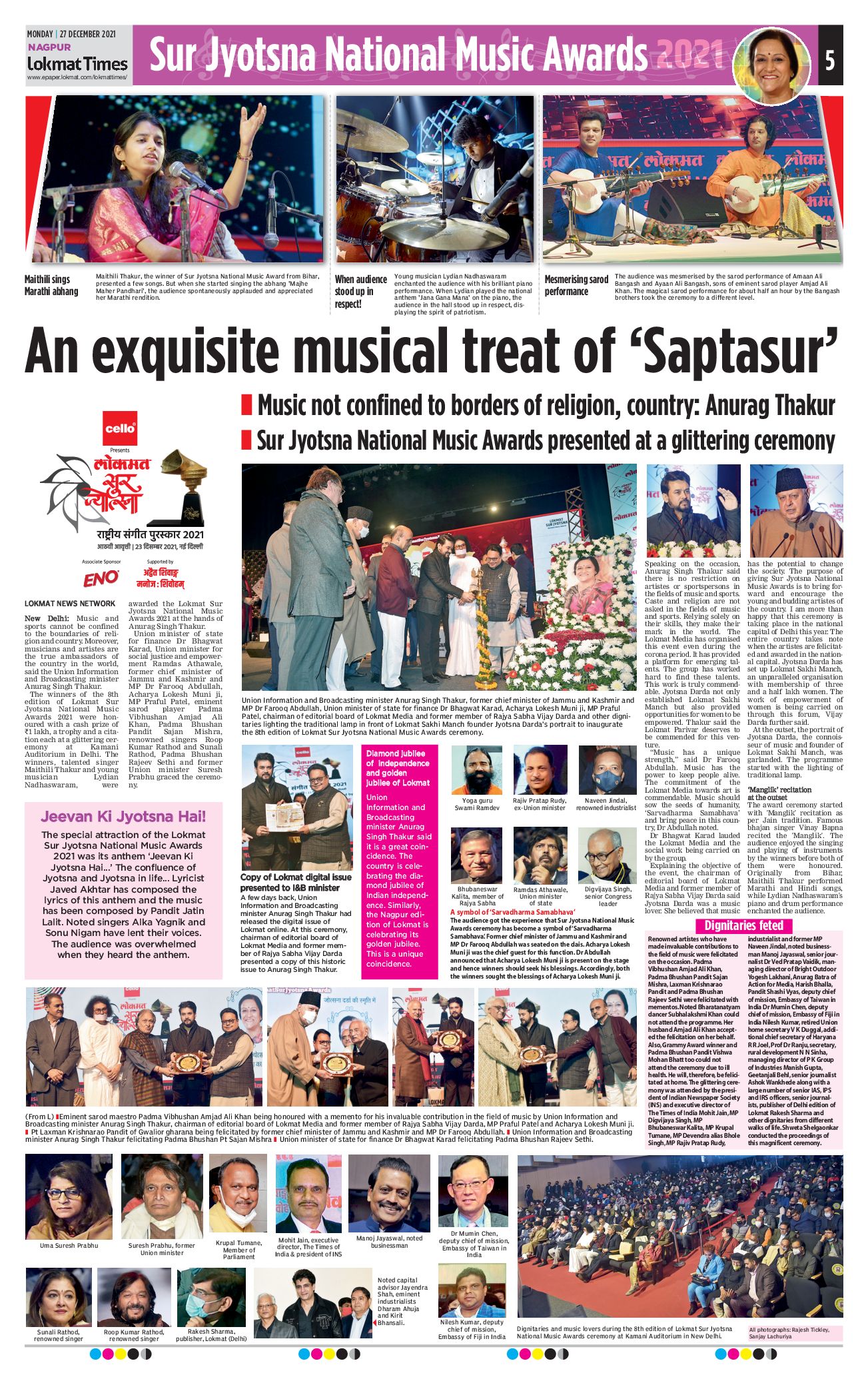 Point out mistakes but highlight good work too