The music lovers who were deprived of live music programmes during the corona-triggered lockdown were able to have their fill in the festival of music, rhythm and beats at the Lokmat Sur Jyotsna National Music Awards. The programme was made  memorable by the performances of fresh talents, showcasing their best styles.

Mumbai: A magical music programme was held in the latter half of the ‘Sur Jyotsna National Music Awards’ ceremony, during which outstanding talents in the field of music were felicitated. The programme began with the musical ‘jugalbandi’ of S. Aakash, Shikhar Naad Qureshi, Ojas Adhia and Ramakant Gaikwad. Subsequently, singer Pooja Gaitonde performed Qawwali ‘Bhar Do Jholi Meri..’ with great finesse. Singer Ankita Joshi presented the song ‘Govind Gopal..’ with great intensity. Singer Aarya Ambekar performed ‘Mharo Pranam..’ and ‘Avagha Rang Ek Jhala..’ to the acclaim of the audience.

This year’s Lokmat Sur Jyotsna National Music Award winner Prathamesh Laghate sang the devotional song ‘Sawale Sundar..’ as a tribute to Pt. Bhimsen Joshi. It was well received by the audience. The ceremony concluded with the song ‘Aai Bhavani Tarsi Bhaktala..’ sung by the award winning singer Hargun Kaur. This unique musical feast will forever be remembered by the  music lovers.

Humanity is the religion of artistes; they are not  bound by barriers of caste or religion: Vijay Darda

Mumbai: Vasant Panchami is the festival of worship and adoration of Goddess Saraswati. People worship Goddess Saraswati to get enlightenment and knowledge. On this auspicious day, ‘Sur Jyotsna National Music Awards Ceremony’ is being held. In a sense, this is the blessing of Goddess Saraswati. The name of this award has been linked with my wife Jyotsna. She had a deep relationship with music. In a real sense, she was an ardent music lover. Jyotsna is not with us today. Let me tell you that it is on this very day that we were united. Today marks the fiftieth anniversary of our marriage. Although she is not here today, you are all here. Because of all of you, family, friends, I stand hale and hearty in front of you today.

Jyotsna’s life was devoted to music. She believed that if you want to live a good life, you need music. Even in difficult situations of life, the smile and happiness on her face remained because she was connected to the music. Her immense love for music has been the inspiration for this award.

It is our intention to create a platform through these awards. Today, on behalf of the Organising Committee and the Lokmat Media group, I warmly welcome all of you. Today’s ceremony will pay homage to the greats in the field of music. Veterans who have taken Indian music to new heights around the world are also being felicitated. We are also felicitating the young and budding singers Prathamesh Laghate and Hargun Kaur with the 2020 Sur Jyotsna National Music Awards. Through this award, we are paying homage to Bharat Ratna Pt Bhimsen Joshi on the occasion of his birth centenary. His son Srinivas Joshi is present here. We are also paying homage to Padma Vibhushan Jasrajji. His daughter Durga Jasraj is present here today. We are also remembering Padma Bhushan Ghulam Mustafa Khan. His sons Rabbani, Murtaza, Qadir and Hasan Khan are present at the ceremony.

All these great personalities made invaluable contributions to take Indian music to a new height. These great artists have no caste or religion.   Humanity is their religion and they carried this music of humanity all over the world. In today’s event, we are going to honour the veterans in the world of music.

This is a matter of great pride for us. The well-known music director Padma Shri Anandji Virji Shah, Padma Shri Hariharan, Padma Shri Satish Vyas, Padma Shri Kailash Kher, Padma Shri Anuradha Paudwal, Pandit Ajay Pohankar, Roopkumar Rathod, Sonu Nigam along with Padma Bhushan Udit Narayan are present here. These great artistes will be felicitated at this ceremony. All these dignitaries have enriched Indian music. They have cast a spell-binding charm over the audience and helped them to enjoy the nectar of music.

Today’s ceremony is attended by a large number of political and social dignitaries and people’s representatives. The event which is attended by the people’s representatives is blessed by the masses. Two former chief ministers of the state as well as ministers and MLAs are present here. Besides, Director General of Police Hemant Nagrale and Mumbai Municipal Commissioner Iqbal Singh Chahal are also present.

During the seven-year journey of the Sur Jyotsna National Music Awards, the ceremonies were held in Delhi, Kolhapur, Pune and Nagpur. We will take this ceremony to other cities in the country in the near future.

I want to express special thanks to the panel of judges. It is a really difficult task to select one female and one male awardees from thousands of talented artistes across the country.

Lokmat Media, which has been enriching readers, has not kept itself limited to the publishing newspapers. Lokmat has become an institution which is working hard to propagate the good things in the society and make it more evolved. Lokmat is trying to enrich the society through various initiatives like Lokmat Sakhi Manch, Maharashtrian of the Year Award, Parliamentary Award in the national capital Delhi, Women Summit in Pune, Sarpanch Award and Doctor Award, said Vijay Darda describing the various initiatives of Lokmat Media . It has worked to empower good people. So, Lokmat  thanks all the members of the family, congratulates them. These members have immersed themselves in all these activities and projects considering them as their own. The secret of success of Lokmat lies in the feeling among all of being part of a family. You will be happy to know that this year, ‘Nagpur Lokmat’ is celebrating the golden jubilee year of its establishment. On this occasion, I salute Jyotsna’s vision. She set up Lokmat Sakhi Manch for the uplift of women, providing them a platform. Today, more than 3.5 lakh women in the state have joined the Sakhi Manch. There is no other platform for women as big as this in the entire country, he added. 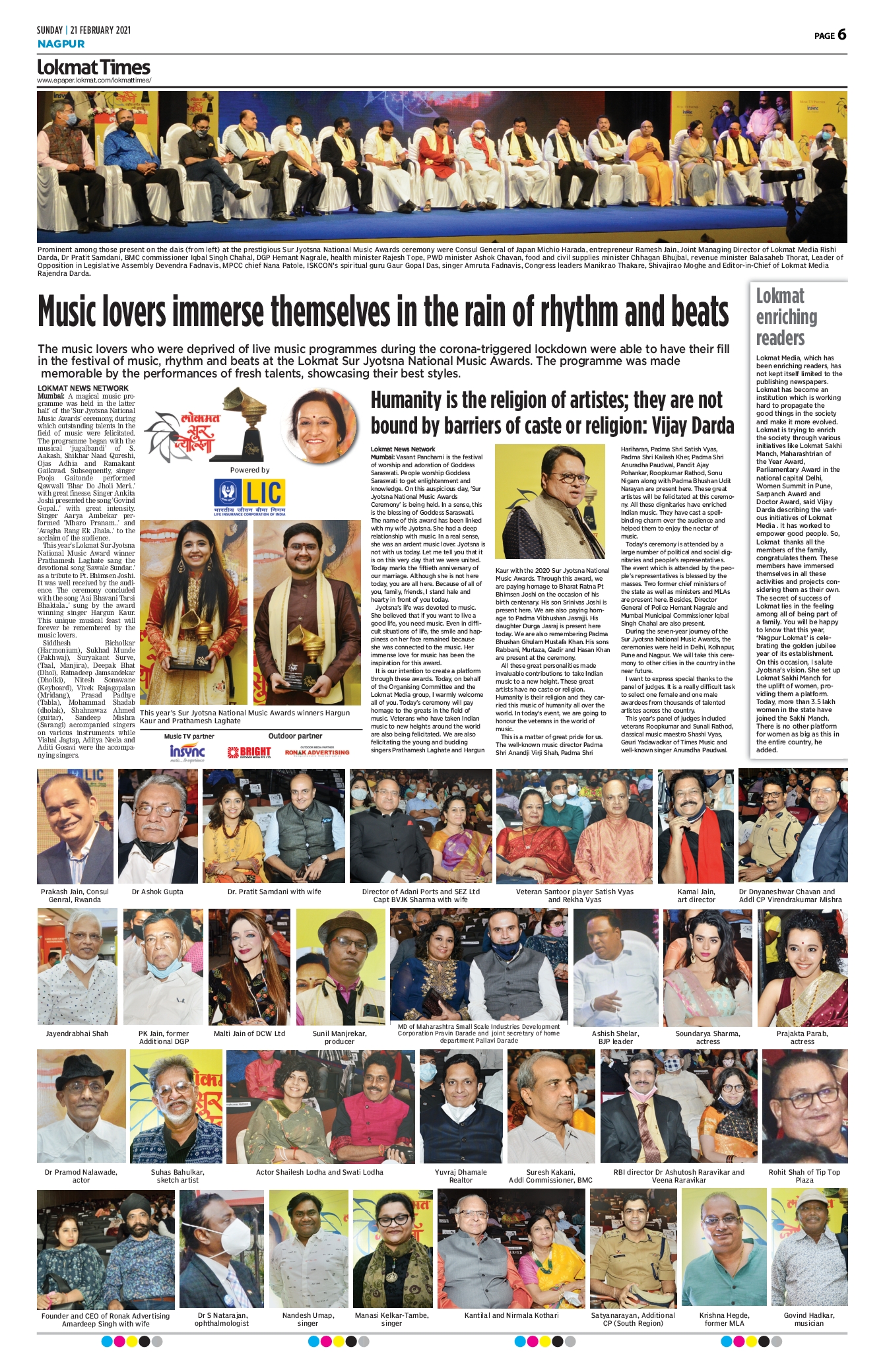