Apathy towards North-East can prove dangerous!

When something happens in UP, Bihar, Punjab, Maharashtra, Karnataka, Kerala, Andhra Pradesh or any state in west, north and south India, the entire country is shaken. From print media to electronic media, all are alert but let anything happen in seven northeastern states and nothing happens. There is no scare! I am surprised at this attitude, why? For three and half months in Manipur, United Naga Council has blocked the national highway. Mayhem has broken out. Manipur is in a state of turmoil. Prices of petrol have increased from Rs 200 to Rs 300 a litre. LPG cylinders are not available. Prices of essential commodities have skyrocketed and yet there was no buzz anywhere in the media!

This is not the first time the national highway has been breached. Such blockade has taken place even in the past and civilians always have to suffer the consequences. The blockade may continue for months and the government seems to be in slumber. Why does this happen? Why is the government’s attitude towards northeast indifferent and insensitive?

I have been maintaining a consistent interaction with senior Congress leader from Manipur Rishang Keishing on this issue. He has been a member of Lok Sabha, Rajya Sabha and three-time chief minister of Manipur and I have been his colleague. I asked him that in the central government there are separate departments to cater to the northeastern states, special provisions of funds, but still substantial problems remain? Why like other state northeastern states of the country are not homogeneous? He agreed with me and enumerated the reasons which I have often stated. In the Rajya Sabha, I have often participated actively in debates on topics of northeastern states. The traffic situation is bad, there is no good means of communication. Means of employment are not enough. 70 years after independence, the whole area is neglected. Despite spending thousands of crores of rupees, Hindi could not be simplified and established in south India. So is the case with the northeast.

Now just consider the fact that Manipur is going to the polls on March 4 and 8. The state with 26 lakh people was ruled for 15 years by the Congress. Okram Ibobi Singh is the chief minister since 2002. Naturally, it is being asked whether the government has kept silent just to fuel anger against the Congress?

Whatever be the reason, the truth is that the attitude of central government towards not only Manipur but the seven states of the northeastern part has always been full of indifference. The Article 371 is in force in many of those states and the governors of those states have been given the additional powers to maintain law and order. However, there are many questions concerning this in view of the fact that there are elected governments there so why this Article is in force and there has been no debate on this Article. It is issued in the name of security of the tribal groups.

As far as turbulence is concerned, none of the northeastern state is an exception. ULFA militants have taken control of the countryside. Mizoram, Arunachal Pradesh, Nagaland, Manipur, Tripura somehow always remain victims of the unrest. There is uproar over the issue of police brutality or misuse of special powers given to security forces. Life in most of these states comes to a halt by sunset.

However, the result of the indifference of the central government is that the people of North-East regions are angry. They feel that the government has discriminated against them. When a Manipuri group visiting the Taj Mahal is asked what country they come from their anger is natural. When the girl from northeastern India is molested on Delhi roads, their anger is natural. It is because of this kind of conduct that there is very little knowledge about the northeastern states in other parts of the country whereas these states are full of diversity and cultural plurality.

If there is widespread anger among the people of these states against the Union, it is a situation of grave danger because China is maintaining a hawk’s eye on the area. It had captured Tawang territory in Arunachal Pradesh in 1962 war. However, it backed off and Tawang is still with us but China still considers Arunachal Pradesh to be part of that country. If we want to win the psychological war or strategic war with China, it is important to win loyalty among the people of North-East as is the responsibility of the citizens of any other state in India. One more important thing: If there is a direct way for the Islamic State to penetrate India and it could be from this region. If you see the world map they can reach India and Bangladesh via the Middle East through the sea. Islamic State’s mouthpiece Dabik has announced its intention that also includes province of Bengal. It is important to hear the alarm bells. With full readiness and integrity, India should focus itself on the subject and should win the hearts of the people of North-East. Our vision should be sensitive.

We shall never forget a dear friend and beloved son of Vidarbha Bhau Jambuwantrao Dhote! I’ve seen him in every shade of life. Where can you see such combination of diversity as mirrored in his life? He has practised politics with great dramatics. His politics, his life in every way carried human touch. No interest, no desire! I’ve always found a child in him. Such detachment can be found only in a child. I will badly miss you, Bhau..! 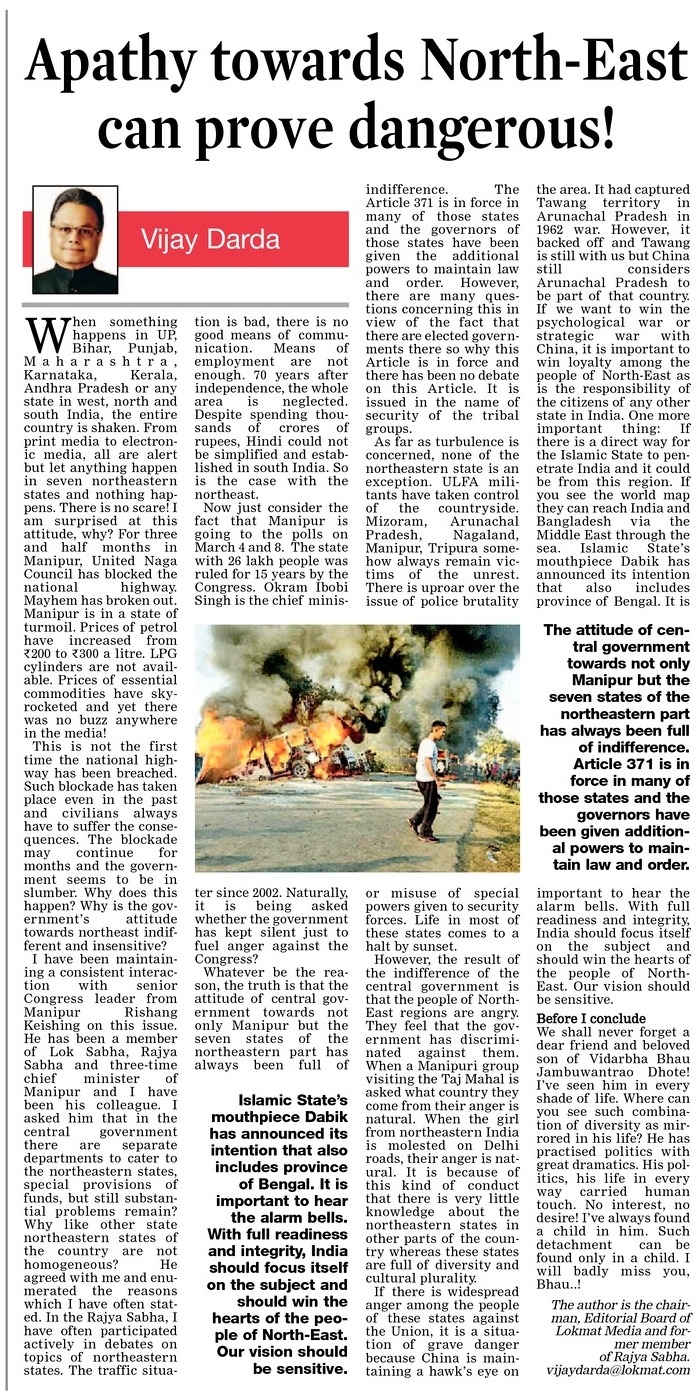