Nagpur, Oct 24: Nature and god cherish diversity. That is why they gave mankind flowers of different fragrances and fruits of different tastes. Human beings should accept this diversity while following religion too. There is only religion and that is humanity. And the only difference is that of creed, sect and the way of worship. Therefore, only by respecting each other’s beliefs, holding hands and moving forward, will the future generations become free from the evil of religious violence. In these words, the world renowned spiritual gurus gave the clarion call for universal brotherhood and peace to the world from Nagpur on Sunday.

Speaking at the Lokmat National Inter-Religious Conference organised by the Lokmat Media on the topic ‘Global Challenges to Communal Harmony and Role of India’ to mark the golden jubilee year of Lokmat’s Nagpur edition at Kavivarya Suresh Bhat Auditorium in Nagpur on Sunday, the spiritual gurus expressed concern over the growing incidences of violence globally. They said India, which is the origin of four main religions and which has maintained harmony through diversity for thousands of years, is already a spiritual world leader on the path of tolerance and harmony.

The rule of nature never changes and it cannot change. It does not have any religion and therefore, action guides the reaction. Keeping this in mind, social harmony can be established. There is a need to create mutual acceptance for other religions as well. Moreover, universal brotherhood can be achieved by establishing communal harmony and unity through mutual coexistence as well as non-violence and peace, the Dharmacharyas said in one voice.

Vijay Darda in his introductory remarks explained the objective behind organising this conference. The editor of Lokmat Samachar Vikas Mishra conducted the proceedings while Rajendra Darda proposed a vote of thanks. On this occasion, the dignitaries released the Lokmat Media’s Diwali special issues ‘Deepotsav’ and ‘Deepbhav’.

Congregation of Dharmacharyas from country, abroad

The Dharmacharyas of all religions spared time from their busy schedule to attend this conference. Brahmaviharidas Swami specially came from the United States of America for this conference. Swami Ramdev came from Haridwar despite his tight schedule. Sri Sri Ravishankar arrived from Bengaluru on Sunday morning. Dr Lokeshmuni came from New Delhi, Bhikkhu Sanghasena from Ladakh while Haji Syed Salman Chishty came from Ajmer. Archbishop Cardinal Oswald Gracias and Pralhad Wamanrao Pai came from Mumbai. It may be noted here that for the first time after the coronavirus pandemic, so many Dharmacharyas came together and shared a platform at the conference organised by the Lokmat Media and the Nagpurians got an opportunity to witness the Congregation of Dharmacharyas.

The concept of ‘Vasudhaiva Kutumbakam’ is our ancient culture and communal harmony can be established through the feeling of Sarvadharma Samabhav. The world will get a message of love, peace and brotherhood due to this, said the Dharmacharyas at this conference. Organised at the heart of the country, this conference is actually the ideological Kumbh Mela, and the message and appeal of communal harmony conveyed through it should reach every part of the world, opined all Dharmacharyas.

The sarsanghchalak of Rashtriya Swayamsevak Sangh Dr Mohan Bhagwat expressed his feelings through a video message. Dr Bhagwat said, “Religion is the connector. But if the human feeling is negative, people work to divide the society by abusing religion. This is because there is no interaction with each other. Therefore, we need to remind the community that we are one.”

Diversity is uniqueness of India
The religion keeps people together. But some people plot to create hatred in the name of religion. But we should keep in mind that diversity has essence and god too is essence. Intellectuals become happy due to diversity and fools fight with each other. Diversity has to be accepted in human life. Sarvadharma Samabhav and diversity are unique qualities of India. It is the duty of the religion to solve various disputes and enmity.
– Sri Sri Ravi Shankar

World has danger from religious, financial and political terrorism
The world is facing biggest threat from religious, economic and political terrorism. The name should be Sarva Panth and not Sarva Dharma. Instead of saying that all will be Hindus, Muslims or Christians, we should say that all should be made human beings. The country works as per the Constitution while the society is based on spirituality. There is a need to take a stand that we all are united.
Swami Ramdev

Unified efforts required
Once upon a time, landing on the Moon or space travel were like dreams. But now they are reality now. Many feel that prevailing social harmony in the world is a dream. But it is my belief that this dream will be fulfilled. If the entire society makes collective efforts for spreading love, following rules and developing good life, the global social harmony can be established. Instead of expecting social harmony from the world, people have to start with themselves.
– Brahmaviharidas Swami

World should become non-sectarian, not secular
Existence of others should be acknowledged as much as our own. Religion is humanity and we all are extensions of opinions. This country is not secular but non-sectarian. Today a positive feeling is required. This world is beautiful except for negativity. The chariot of messengers of peace here should go forward. The discussion on thoughts in this congregation of religious leaders should reach every part of the world. The lifestyle based on Ayurved, yoga-pranayam and restraint should be accepted once again.
– Acharya Dr Lokeshmuni

Focus on similarities, not contradictions, in religion
As the hatred is being spread in the name of religion, the world needs to create an attitude of acceptance of the existence of other religions along with mutual dialogue. The concept of god and some thoughts are different in every religion. But there are many similarities too. If we think with an open mind and brain, it will appear that we all have more of the same links than contradictions. Therefore, instead of paying attention towards contradictions, we should focus on the similarities.
– Cardinal Oswald Gracias

Humanity is soul of all religions
Efforts to make each other happy and respect for each other’s feelings are worship to god. These are the values of human culture and these should be inculcated from childhood. Equality, civility, harmony, tolerance, gratitude and moral values are all values of life. These values will have to be inculcated and social harmony will be established. Humanity is very important in life and it is the soul of all religions.
– Pralhad Wamanrao Pai

Valuable role of India for non-violence, peace
Whatever is going on in the world is very disturbing and worrisome. Religious violence, war, aggression, hatred and prejudice have ravaged the world. In such a situation, the role of India is very important to make the world understand the importance of non-violence, peace and compassion. The time has come for us to be unified and find solutions to the problems of the world.
– Bhikkhu Sanghasena

Everyone’s ‘rashtradharma’ is same
Our clothes are different in colour. Similarly, the worship methods are different. The sects can be different. But, everyone has the same meaning. The ‘rashtradharma’ of all of us is one. This is the real strength of Indian culture. Our culture is not connected to any particular religion. Sarvadharma Samabhav is our philosophy. Respect for all is the way of life. Unity in diversity is the unique feature of our country.
– Nitin Gadkari

Lokmat upheld importance of secularism
The Lokmat upheld the importance of secularism right from day one. It’s stand has been Sarvadharma Samabhav. No religion is bigger than humanity and we upheld these values. The Lokmat respected all religions and creeds. People have been living together since ages and ‘Vasudhaiva Kutumbakam’ is the culture of the country. The guidance of Dharmacharyas on social harmony is important in the backdrop of the fundamentals in the current situation that were created in the name of religion.
– Vijay Darda

Path of peace, goodwill can protect world
At a time when people are being murdered in the name of religion globally, the world is looking to India for a solution to this problem. India’s responsibility at the global level has increased as it has been following the ideas of non-violence preached by Lord Mahavir, Tathagat Buddha, Guru Gobind Singh and Mahatma Gandhi. Only the path of peace and harmony can save the world.
– Rajendra Darda 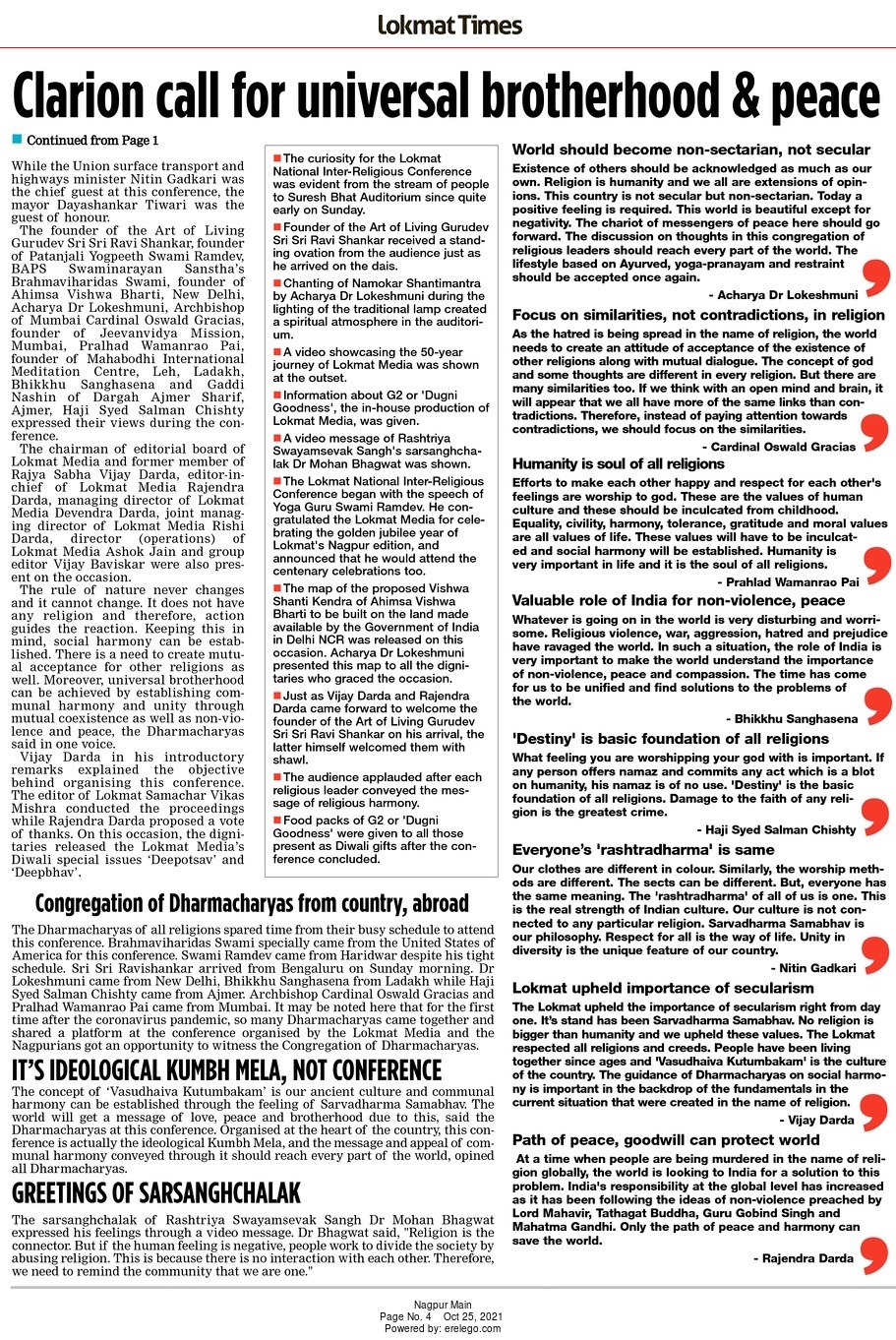 Pranab Da is outspoken and committed to diversity