In recent times we have seen a flurry of some very unbecoming public conversations. There has been the scenario of the BJP’s prime ministerial candidate Narendra Modi daring the Samajwadi Party leader Mulayam Singh Yadav to transform UP into a Gujarat, and then observing that the latter cannot do it, because it requires a 56 inch chest. Then there was that tea boy comment about Modi from the erudite Mani Shankar Aiyar, who is a diplomat and is well versed in the art of carrying on dialogue among not so friendly neighbours. In so far as the public utterances from the latest stars of our democracy Arvind Kejriwal and his band of neo-converts to the business of politics of power are concerned –the less said the better.

In fact in the case of the Aam Aadmi Party, a look at their behaviour in public seems to giving the reasons to their middle-class supporters to have a re-think about the wisdom of supporting them in the first place. Although, it would be too early to say that the AAP phenomena is losing its steam, as people would remain patient with it, and wait for a decent time to elapse before revisiting their choices. But then they seem to be defying the main reason for which the people opted for them. The people were sick of the regular politicos and felt that these new entrants would do better. But they seem to be forgetting that the people dislike the absence of basic decency from the democratic dialogue, and behaving in the same arrogant manner.

But then these above named politicos are not the only culprits. They are the ones who hit the headlines recently. Otherwise, there is large body of politicians cutting across party lines and other public figures that freely indulges in the misuse of language through the course of public dialogue. It is often seen on television debates where allegations keep flying in the midst of rising decibels. Usually these debates start as shouting matches, and remain at the non-informative level. The language used may not be abusive, but insulting it surely is, and then there is an attempt to get away with it under the guise of freedom of expression.

On the social media in the internet, to be abusive is seen as a right or an integral part of freedom of expression. Indeed, to use derogatory expressions for those who are not on your side appears to be the norm. It is clear to the naked eye that this attempt at name calling is one of the brow-beating techniques to silence any contrary voice. One understands, that freedom should not be curtailed, and when the internet offers a great communication opportunity in a real time situation, some sort of misuse also comes along with it. The expectation is that through the passage of time, the people using the medium shall mature, and be able to sift the grain from the chaff. But no one can deny that the problem does not exist.

We are in the midst of one of the more challenging elections in the 21st century. At age 65 our republic needs to be reinforced with a much more enlightened commitment to the basic values of our democracy. This is not the time for hype and hyperbole in our public discourse. Decency is the basic need of the hour, because it is only through decent behaviour that we can convey our respect even for those with whom we have ideological differences. It is not for nothing that the BJP leader and former prime minister Atal Bihari Vajpayee is respected by everyone in the political class. Above all, he is a decent man. This is not a trifling virtue under trying and testing circumstances.

In the use of language, often it is not the factual correctness of a statement that matters more than the tone in which it is stated. For instance, in the case of this tea boy remark against Modi. He is himself proud of being the son of a man who owned a tea shop, and makes no secret of it. But then Aiyar used it in a very deprecating manner. Whatever the provocation, he cleanly forgot that now Modi is a thrice elected chief minister of Gujarat, and has come a long way from those origins. Similarly, when Modi flung that barb against the Yadav chieftain, he too forgot that no one has a 56 inch chest, and this includes him. Now these may appear as minor transgressions, but in the public eye and mind these are defining lapses of politicians and these characterise the entire class. The sinking image of the politician in the public’s perception has a lot to do with such conduct.

Indeed, Modi seems to be extending the negative reach of his language far too the extreme. Thus when he talks of a Congress Free India, he completely forgets that in this country the BJP or the Bharatiya Jana Sangh have ruled at the centre for less than 10 years, yet no one has claimed that this is a BJP free India. So, even if for the sake of argument it is accepted that the Congress loses the next general elections, India would not be Congress free as Modi claims, just as it is not BJP free now. But when he makes this claim, he clearly forgets the decency of the democratic dialogue.

It is one thing to be aggressive, and quite another to be indecent. Likewise you can be critical of anyone but then you need not be possessed by hatred. Ultimately, democracy is a game in which the outcome of the contest is decided by the people-who are participants as equals- and spectators as some players wrongfully come to conclude. The players’ fate is in the hands of participating people-who also act as referees. It is equality of power among the players, and the participating people that lends a unique feature to democracy, and ensure that the chosen ones are not drunk on the power conferred on them for too long. 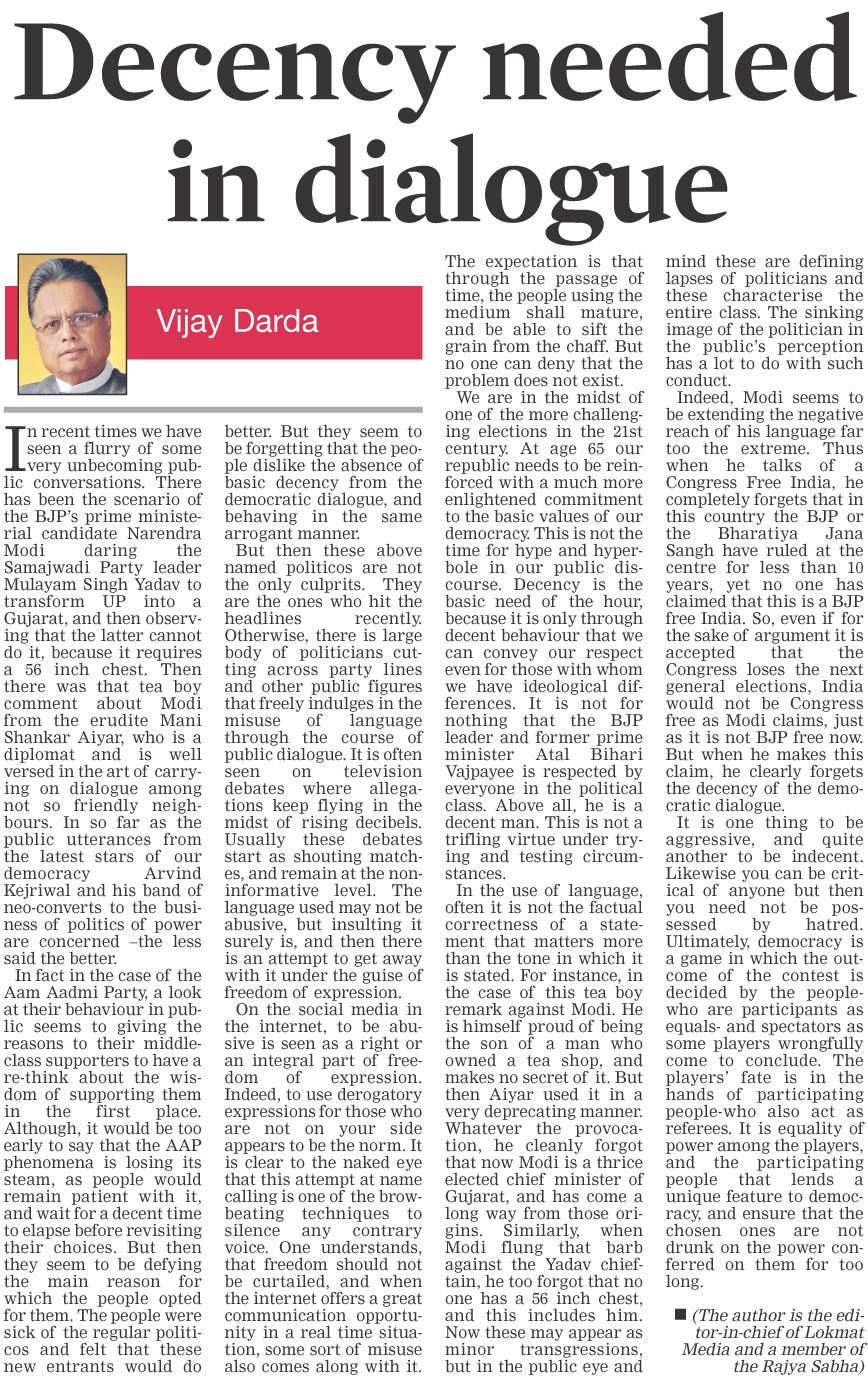