I rarely watch TV news channels because of my preoccupations, but whenever I do, I feel that the language of Hindi news channels is deteriorating fast. Especially in these days of tension between India and Pakistan, the language of most of the channels of the two countries has become worryingly unrestrained. The kind of provocative language being used in the name of nationalism can never be justified when weighed with the ethics of journalism.

I have been breathing through journalism against these for many decades. So when I see any kind of smut entering in any form in the media, it hurts a lot. Is it correct if some Indian news channel uses indecent words for Pakistan Prime Minister Imran Khan or any Pakistani news channel does the same for Indian Prime Minister Narendra Modi? Of course not. Both are Prime Ministers of their respective countries. This post is dignified and before commenting on the person occupying this post, the media must take care not to breach the limits of decency! Except for a couple of channels for whom language still matters, the decency in Hindi news channels has unfortunately become a thing of the past. Most of the channels have stooped to the level of hurling abuses. It seems as if there is a competition as to who can hurl more abuses.

I am not concerned about what is happening in Pakistan, but I am hurt by what is happening in India. This is not our culture. Our culture has taught us to show some decency even to enemies. Our news channels should at least respect our culture. It is not just me; the educated and intellectual sections of the society are disturbed by the language the channels are using. They are also upset as to why the anchors of most of our news channels shout so much? They don’t know why a slanging competition has started in the news channels.

The most serious thing is that the present format of debate on any topic on the news channels, too has become a victim of screaming and shouting. When the TV industry started in India, most of the journalists to join were from the print media. They understood the importance of debate on any topic, so the tradition of discussion began. The aim was to bring people and experts with a serious understanding of the subject on a platform so that the viewers could be introduced to the various contexts of the subject. Until some 10 years back, the situation was better but after that the mess started. Gradually, the spokespersons of political parties started dominating the debate. The anchors became biased and the discussion squandered.

Only recently, I saw two guests connected from Pakistan on a news channel. I was hoping that there would be some meaningful debate from both sides, but shortly after, the TV anchor became aggressive. The anchor even told the Pakistani guest that “I will enter your house and beat you up!” I was speechless! What kind of journalism is it? If you have invited someone as a guest, it is your responsibility to respect him. If he is saying something wrong, it can be answered with arguments. Isn’t it disgusting to lose temper and talk about thrashing somebody during discussion?

Unfortunately, the news channels have made the TV screen a virtual battleground. It seems that there is a war between India and Pakistan on the TV screen and the fate of Jammu and Kashmir will be decided on this screen! How strange! Actually, the TV industry will have to think seriously about this. All the news channels have to sit together and see their face in the mirror of journalistic standards! However, even in the midst of this linguistic indecency, I am not disappointed because there are many journalists who still have a sense of decency in using the language. Such journalists are there in our country as well as in Pakistan. I would like to name a Pakistani journalist Najam Sethi. Whenever he names Indian leaders, he does not forget to suffix ‘Ji’ or ‘Sahab’. However, his famous programme ‘Sethi se sawaal’ has been off-air in Pakistan as he speaks the truth. In my view, truth and decency are the religion of journalism. You watch the world’s famous news channels BBC, CNN, Al Jazeera, Russian TV, TV France or any other channel, their anchors do not shout. They talk with decency and that is how it should be!

There is serious tension between India and Pakistan right now. It is evident that this topic is important for the news channels. But it is a matter of concern that the news channels of both the countries have become linguistically unrestrained. This cannot be justified from any angle! 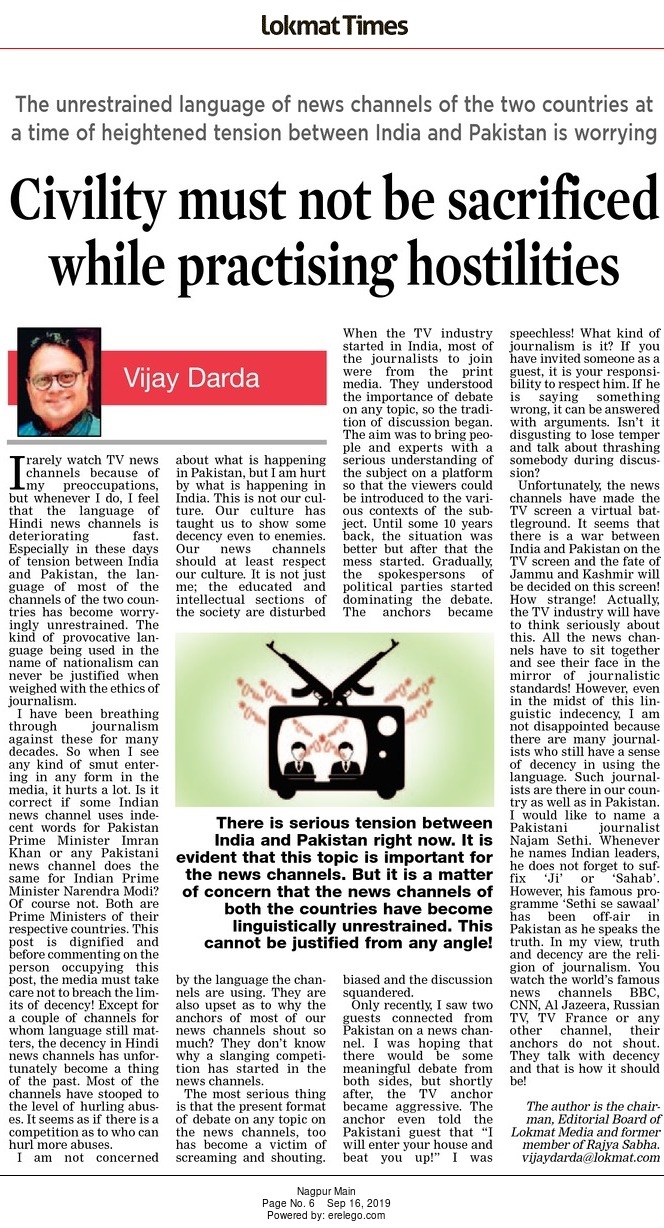 Global escalation is a warning bell