Last week, we crossed a major milestone in the evolution of the rights-based architecture for our people. We already have a constitutionally guaranteed right to work, education and information paradigm and now to this we have added the right to food element. Under the UPA chairperson Sonia Gandhi and prime minister Manmohan Singh a commitment to empower the people has been an abiding faith with the government. There has never been any dilution of this commitment in the face of all the odds, and we all know that the odds have been mounting over a period of time.

The main crux of the problem is the absence of bipartisanship in the functioning of the democratic institutions. It is a well established norm that in a democracy, the parliament is the only forum for debate on all crucial issues in the country. But sadly, we have been witnessing a situation where the main Opposition has converted the disruption of parliament into a political tool. The paralysis of the parliament for days on end is a painful development not just for me as a parliamentarian, but also for the entire country. We do have calculations about the money that is lost when the parliament does not function but no one has bothered to find out the loss that the people suffer due to delay in the passing of laws. Now this Food Security legislation has been pending since 2011, and any matured polity would have hastened to come together, and in a show of bipartisan unity for a measure that is intended to benefit 67 percent of the population for something as elementary as food, passed the law without any delay. Considering that the expenditure on the programme is going to be ` 1.25 lakh crore in a year, it is obvious that a delay of one month meant a loss of ` 10,000 crore for the poor people. Indeed, the cumulative loss for the people in terms of lost opportunities due to the delays in the parliament is a stupendous and mind boggling sum. Besides, these are not situations in which you can derive comfort from a feeling that it is better late than never. These are situations wherein any delay always demands a heavy price.

No one has a case that the Opposition’s viewpoint should not be heard or that the government should be allowed to go ahead unilaterally. But then the mechanism of enactment of a law is such that all political parties are heard in the meetings of the standing committees that conduct a detailed scrutiny of any Bill. It is on the basis of their recommendations that the government reshapes the Bill, and then tables for the passage in parliament. A wider consultation in the form of parliamentary debate is always a welcome addition, but the time has come for the people to be more educated and aware of the delay tactics that are adopted by the Opposition frustrate the well-intentioned moves of the government.

In the case of the Food Security Bill, the Opposition’s game plan to thwart this welfare measure was obvious. Now, the Congress-led UPA has brought this legislation as part of the implementation of its 2009 manifesto, but the Opposition and specially the BJP believes it is a game changer for the 2014 elections and hence it should be delayed. Not just for the 2014 elections, even for the states that are scheduled to go to polls in November 2013, the BJP believes that this legislation would rob it of the advantage of the free food grains scheme. For the simple reason is that once there is a Central scheme in place, then the state governments would not be able to claim that they are funding the cheap rice/wheat that the people are getting through the public distribution system. The bulk of the subsidy comes through the Central government even now, but then the state governments are able to mask this reality and corner all the glory. The ordinance route was taken by the government after it became clear that under any pretext the Opposition would not allow the passage of the Bill.

Politics was weighing over the people’s welfare in the Opposition’s mind, and with the decibels in the partisan acrimony rising, there was little hope of a consensus. However, now that there is an ordinance, it would be easier to get the support of all the parties, as none can oppose a Food Security Bill. However, it must be asserted that for the UPA leadership the motives are just the welfare of the people and the fulfillment of a commitment made to them in the last general elections. This leadership is aware that all measures to empower the people have to be taken, even if these are politically inconvenient like the Right to Information.

In terms of sheer numbers, 81 crore people will benefit from this scheme, and this makes it the biggest food programme in the world. It speaks for the growth in the country that we have the food rains and the resources to implement this welfare measure. We have the storage capacity, the food grains output as well as the monetary resources to operate such a scheme. The fears of inflationary pressures expressed by the critics of the programme are misplaced. The food subsidy is already at a level of ` 90,000 crore per year, and the additional burden is going to be just ` 23,000 crore that can be easily absorbed given the overall size of the budget. I must add that the corporate defenders of the no-subsidy approach should also look inwards and take a deep breath before criticising the subsidies for the poor. Please take a look at the revenue foregone and the tax concessions offered to the corporate sector column in the annual budget — the figure is upwards of ` 6 lakh crore. So, why grudge these small amounts for the poor?

Besides, let us take pride in the fact that we have now developed as a nation to the point where the government can shoulder the responsibility of feeding its people. Only a developed and confident nation can take this responsibility and make it a right for the people to demand it. I am sure that when the ordinance is tabled in the parliament for ratification, it will be passed, as there is no political party that can vote against it. No legislation is ever perfect, and there is always scope for making it better, and when the time comes this law could also be amended, but right now this is a moment of glory to savour. 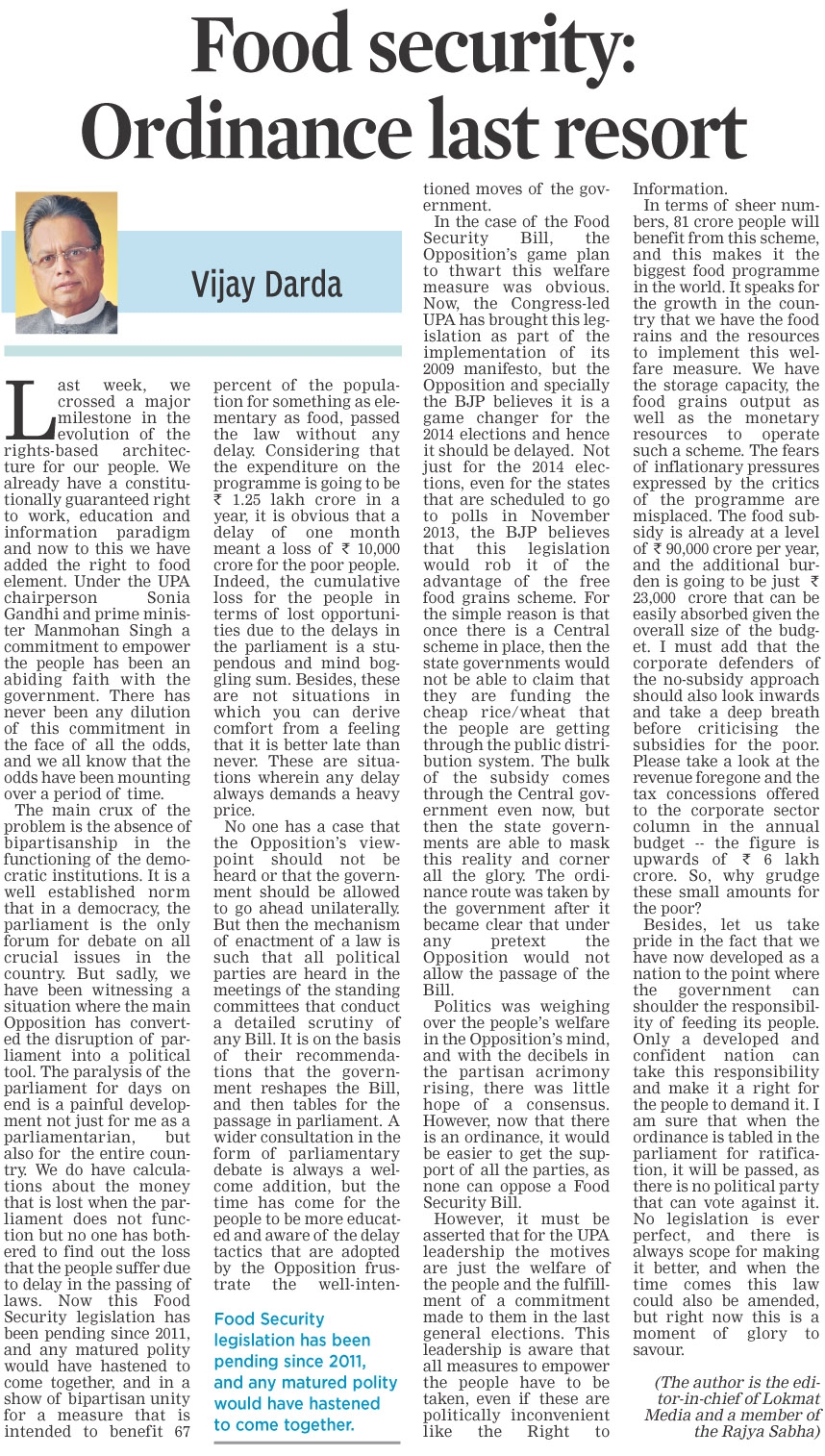 Isn’t even a single death from hunger a stigma?