Did conferring Bharat Ratna on Sachin get Congress votes?

Banaras is a confluence of antiquity and knowledge; a different perspective on Kashi Vishwanath Dham Corridor…

Even as Prime Minister Narendra Modi was inaugurating the Kashi Vishwanath Dham Corridor last week, I was visualising the narrow lanes of Banaras, the smoothly flowing Ganga river and a wonderful view of Rudrabhishek being performed at Baba Vishwanath temple early in the morning. Last month, I went to Banaras to attend the first Akhil Bharatiya Rajbhasha Sammelan. That panoramic scene of Ganga Aarti is still vivid in my mind. One whole evening, I enjoyed a boat ride in the lap of the Ganges and snacked on the spicy ‘chaat’ of Banaras. On a foggy morning, I reached the temple to perform ‘abhishek’ of Bholenath.

I have been to Banaras many times before but I consider the Kashi Vishwanath Dham Corridor to be the pleasant side of my visit this time. The lanes there were so narrow once that you could barely pass through them. But now they have been replaced with a road so wide that even a crowded rally can easily pass through! No one could have imagined that Kashi Vishwanath temple would ever be free from encroachment! For the first time, I saw the ghats of Banaras well equipped. I can say that I saw an aesthetically renovated Banaras this time. I returned from Banaras with really sweet memories. The inauguration ceremony of Kashi Vishwanath Dham Corridor brought those memories back.

I absolutely agree with the words of the Prime Minister that Kashi can’t be defined by words as it is a pure sensibility that has to be felt deep in the soul. In Kashi, awakening is life and death is auspicious too. It is rightly stated in the ‘Puranas’ that as soon as one enters Kashi, one becomes free from all bondage. Lord Vishweshwar’s blessings and a supernatural energy awaken our inner soul as soon as we come here. All these are not just things to say, but if you have a little spirituality within you, you can feel all this in the air of Banaras. It is not a city, but the whole divine ambience, where the sweet fragrance of India’s priceless cultural heritage can be experienced.

It is but natural that most people see Banaras from a religious point of view. This is largely so because faith is embedded in every particle of Kashi. But I look at the nature of this holy city beyond religious beliefs and its spirituality, mythology and cultural heritage. As soon as I talk about Banaras, I remember Kabir’s voice, and then Bismillah Khan’s shehnai resonates in my ears. When Pandit Channulal Mishra’s voice chimes, I get illuminated by the ideological aura of Banaras Hindu University. The characters of famous novelist Kashinath Singh’s ‘Kashi Ka Assi’ stir you from within.

It is conventionally believed that Banaras is situated on the trident of Baba Bholenath. It is a matter of faith, but the Ganges, which sustains life in North India, is there for all to see and which turns its course while passing through this ancient city. Is it less than a geographical miracle? There is definitely something in this city which makes it completely different from the others. Kashi is as gullible as Bholenath but like the Lord’s name, is full of dance, music, knowledge and science. If such a corridor has been built by making Kashi Vishwanath Dham free from encroachment, it is an honour of the Sanatan culture and a great respect towards India’s antiquity and tradition.

Some people are saying that in view of the UP Assembly elections, the first phase of this corridor has been started to get the votes of Hindus. It is possible that there may be such a political view but keep in mind that the voter of this country is very alert. He votes wisely. Let me remind you of an old incident. Even during Congress regime, when Sachin Tendulkar was given Bharat Ratna, some people said it was done to woo the youth but did the youth vote for the Congress? So in this way no voter is affected. Trust your voter! Corridor was the need of the hour. Look at it from tourism and city’s development point of view. The development of Banaras will not only benefit Hindus, but bring, among other things, employment opportunities for people from every religion and belief. Those who know the harmonious society of Banaras know that people of different religions, different colours sell flowers and pooja material and give rides in boats to the tourists in the Ganges. The word Hindu may be attached to BHU, but people of other religions study there too.

This is the specialty of our India that it is not ruled by religion but governed by its Constitution. The equality of all religions is in our genes. Last week, when the Nagpur edition of your favourite newspaper Lokmat completed 50 years, I went on a thanksgiving visit to the temples, mosques, gurudwaras, churches, Buddhist places of worship and Jain temples and paid obeisance because the founder and patriarch of Lokmat, veteran freedom fighter Jawaharlal Darda alias Babuji, taught us to respect every religion. Today, Lokmat is like a bouquet where people of all religions work with one goal of purity of journalism. That’s why I always say that attitude, goal and unity are paramount. If we are united, no power on earth can bend us. 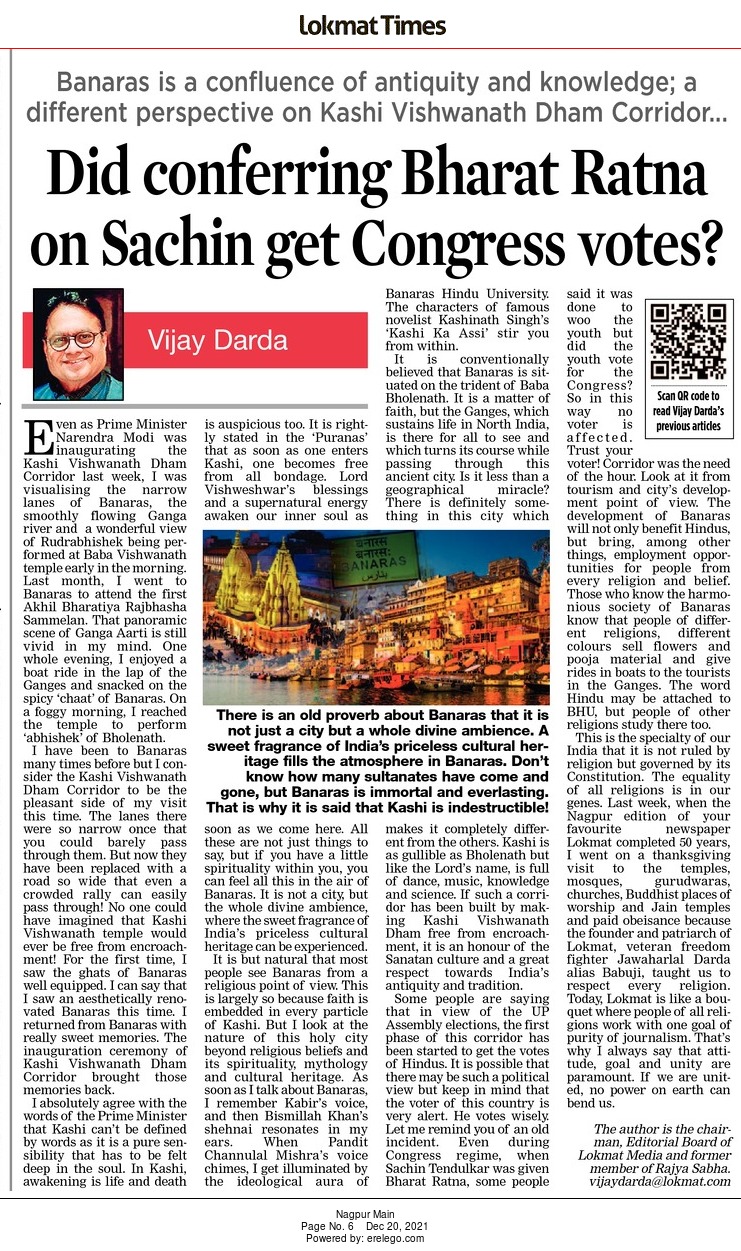