One of Satya Nadella’s college mates Faiz Khan has described him as software’s Sachin Tendulkar. We do not know much about Sachin’s links with software, but then Satya was a cricketer during his school days. But the link is very interesting. Satya became the chief executive officer (CEO) of the $ 78 billion pioneering software giant Microsoft, around the same time the Bharat Ratna, the highest civilian national award, was conferred on Sachin. For quite some time we knew that both the events would happen, but the interesting thing is that these took place in close proximity.

Though totally unrelated fields of activity — both software and cricket –have a dominating presence in our national life. These are the manifestations of India as an emerging superpower on the global stage. It is the software component of information technology that provided the cutting edge to our knowledge-based economy and propelled us to the level of being a global player in the field. Right now, our cricket team may not be doing well, but our power status in the game is firmly established with the innovations like the money spinning much maligned IPL in place.

Yet, this is as much a moment for self-congratulation as it is for looking ahead for the simple reason that whether it is a 46-year-old Hyderabad born Satya Nadella becoming the chief executive officer of the company founded by Bill Gates or the large number of similar persons of Indian origin becoming the bosses at different multi-national companies that are global leaders, they are all basically driven by their individual efforts. A collective national effort that is required to move forward is simply not there. For instance, everyone knows that after the multi-crore Satyam scam, Hyderabad that earned the title of ‘Cyberabad’ has lost the zest for growth. It is now a trophy for which the two sides Telangana and Seemandhra are battling, and in such a situation it is quite a tough thing for it to regain that status when a US President Bill Clinton or the Microsoft CEO Bill Gates came calling to make it one of the favourite investment destinations at the turn of the century.

The point is that it was the genius of the founder of modern India Pandit Jawaharlal Nehru who set up institutions of learning like the IITs, the IIMs and the IISc that have seen our emergence as a knowledge power. But that was six decades ago, and as a nation we cannot simply hope to survive and thrive on the fruits of his efforts for all times to come. That too when as a nation our changing demographics makes it full of young people who have higher aspirational goals and want to achieve greater personal milestones in diverse areas of activities. The broad based and widespread infrastructure that is needed to realise these objectives is simply not there. As a word of caution it must be added that this infrastructure has to be far ahead of its times, or else it becomes rapidly obsolete. In the technology driven 21st century this element is of critical importance.

It is this absence of quality infrastructure that drives the top Indian professionals to America, and we know that although some people have the habit of mocking at the term ‘brain drain’, and calling it ‘brain gain’, this is the single most important factor responsible for our falling behind in several critical areas. Only two nuggets of statistics will drive home the point. Forty percent of the Indians in America have doctorate degrees, and the households of Indians are among the highest income brackets of ethnic groups in America. Add to this the well-known fact that 40 percent of the scientists in NASA are Indians, and 34 percent of the Microsoft’s 1,30,000 employees which Satya has been chosen to head are also Indians.

Our former president A P J Kalam, who is also known as the ‘missile man’, used to discuss the scenario of India becoming a superpower by 2020, and we all know that it is not just a pipe dream. But the point is that it cannot be achieved without bringing quality education within the reach of every child. Let us not make any exception in this respect. When we say every child, it has to be literally every child and not just a statistical construct. For we seldom know the potential that is hidden in every child. Take Satya for instance. When he was a child who could have predicted that one day he would become the CEO of a company founded by Bill Gates. But he could achieve that milestone because he had the opportunity to study even in what are now termed modest circumstances. Indeed with this comment: “What is this fuss all about?” — his father B N Yugandhar who worked as a secretary in prime minister P V Narasimha Rao’s PMO has displayed the ancient Indian trait of balanced person who is neither stirred by praise nor depressed by criticism –‘stith pragya’ as expounded by Lord Krishna in the Bhagwad Gita. One can be sure that this has rubbed off on Satya as well and it came out when he conveyed his personal mantra to Microsoft employees: “I buy more books than I can finish. I sign up for more online courses that I can complete. I fundamentally believe that if you are not learning new things, you stop doing great and useful things.”

Now, Satya’s elevation as CEO of Microsoft is also an opportunity to test if the Indian way of thought leadership has the ability to achieve commercial success in the world of technology that is laced with intense cut throat competition. In his previous assignment as the vice president of cloud computing, he did get a good measure of success turning in a revenue of about $ 20 billion with an income of nearly $ 8 billion. But then he is an engineer, and then his main job now is to engineer a success for a global giant in what is seen largely as a declining business. The PC that was associated with MS Office which made Bill Gates and Microsoft a household name globally is fast giving space to hand held devices. But then Microsoft has bought Nokia, the cellphone company a few months ago, and this gives Satya the opportunity to create a successful marriage between the two. Well, here comes the difference between Sachin and Satya. Sachin batted for 24 years and called it a day. Satya has been playing for Microsoft for 22 years, and now he has to bat at the top. He does not have the Sachin option to retire. 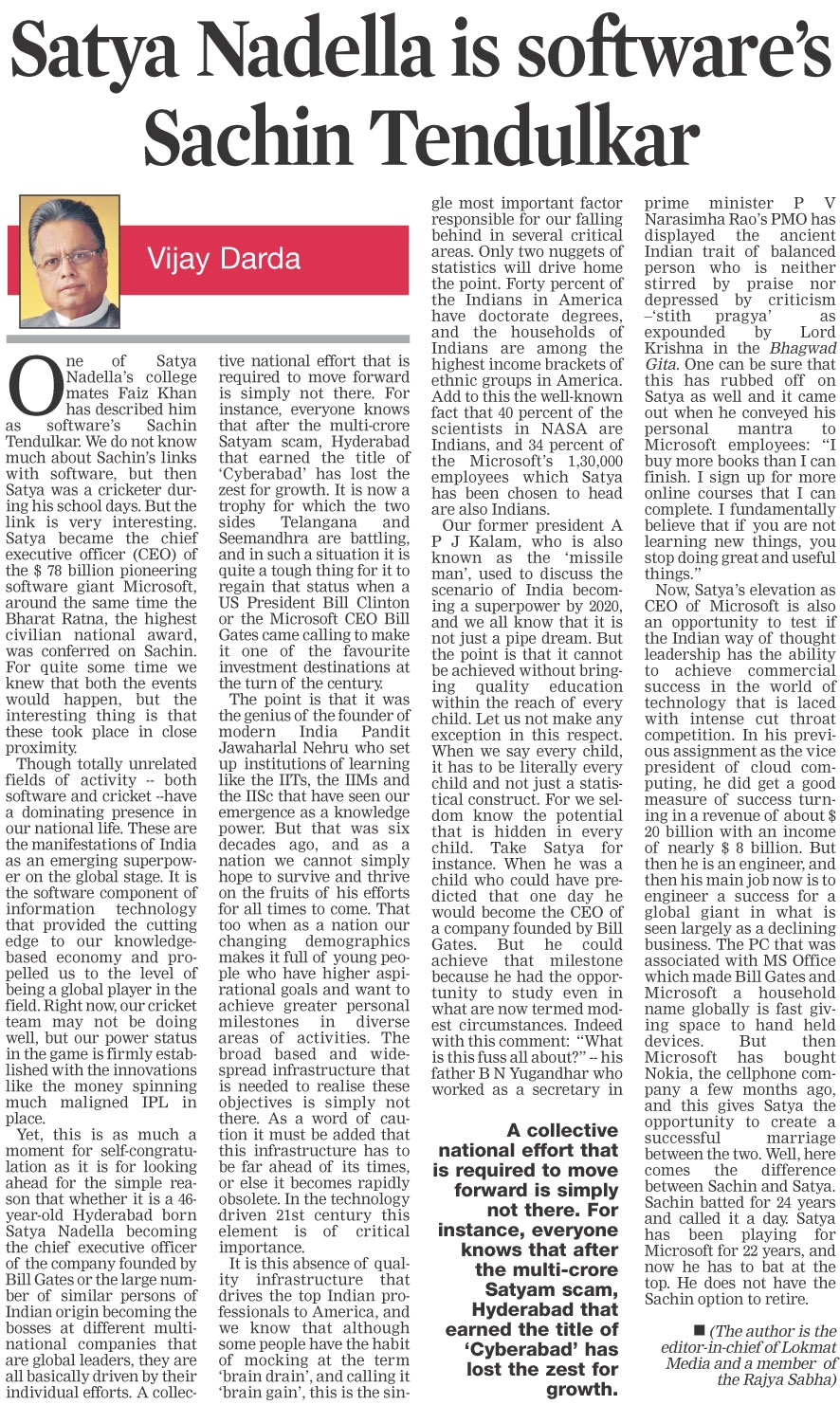