I have never understood why a cricket match between Pakistan and India is looked upon as a war between ‘enemies’ rather than a pure sporting event? The players of both the countries are superb and the game between them should be watched and enjoyed from the point of view of competition. It goes without saying that the team which plays well will win the match! But unfortunately there are Pakistani ministers like Sheikh Rasheed and some bigots of our country who start dragging this game in the fog of religion. Strange atmosphere is prevailing these days. Religion is dragged into everything. Even the sport has not been spared!

It was natural that Pakistan should celebrate the victory of their team, but the interior minister Sheikh Rasheed smeared that victory with mud. Rasheed, notorious for his irresponsible and stupid style and statement, tweeted soon after Pakistan’s victory in the T20 World Cup match: “The feelings of the Muslims of India, including the Muslims of the world, are with Pakistan. Happy victory to Islam. Pakistan Zindabad.” Gentleman, where did your religion come from in cricket and how did the victory in a cricket match get associated with the religion of the people of that country? Your country is an Islamic country but the question is, is sports the battleground for the war of religion? And more importantly, why is Sheikh Rasheed talking about the sentiments of Indian Muslims? It is obvious that he is trying to sow the seeds of animosity in our country. Janab Rasheed, you should know that our great country does not run on the basis of any one religion. Our country is like a garden where flowers of different colours and different fragrances bloom. Our wish is for every flower. More importantly, we belong to that Hindustan which has been talking of equal respect for all religions for centuries and whose flame spreads like fragrance. Rasheed sahab, once you were also a part of this garden, but the stupidity of people like you has turned Pakistan into hell. By licking the opium of religion, you are keeping your country sedated. You are getting ruined by your self-destructive actions. But we pray to the Almighty that you should not follow the path of ruination because wherever the people are, they are connected to the world as a family. And who made you the representative of the Muslims of the whole world? You are not even the real representative in your country. You know that 12.5 per cent of the world’s Muslims live in Indonesia. A little more than 11 per cent of Muslims live in Pakistan and a little less than that in India. And of course, don’t be mistaken. Indian Muslims are one hundred per cent committed to the motherland. Rasheed sahab, you must have heard the names of Abdul Hameed and APJ Abdul Kalam! We worship our Abdul Hameed and APJ Abdul Kalam even today. Think of your nuclear scientist Qadeer Khan who spent his latter part of life vending stolen atomic bomb formulas!

Now Pakistani leader Asad Umar also made an objectionable tweet. He wrote: “First we defeat them and when they fall on the ground we give tea.” If such remarks are not supercilious then what is? Such acts from the Pakistani side have happened in the past as well. India defeated Pakistan in the 2007 T20 World Cup final. At that time, the Pakistan captain Shoaib Malik apologised to the Muslim world. Why? Is Pakistan the leader of the Muslims of the whole world? And yes, let me remind you that Indian bowler Irfan Pathan played a pivotal role in defeating Pakistan then. He was the Man of the Match. Not only this, Irfan had packed off Shoaib back to the pavilion. Selection in the Indian team is never done on the basis of religion because we are a democratic country. The Pakistanis should remember Mohd Azharuddin under whose captaincy Pakistan was defeated several times.

But I am also aware that not every Pakistani is narrow-minded like this. Rasheed’s statement has come under fire there too. I am reminded of a very old match played in Lahore. India won that match and my friends Hameed Rehman and Sadia, despite being Pakistani, supported India’s game and hoisted the Indian tricolour there. This is sportsmanship! Indian captain Virat Kohli also demonstrated a similar sporting spirit just now.

But when a few bigots start trolling Indian team’s brave player Mohammed Shami, the country gets embarrassed. This is the reason why every cricket lover stood up against the trollers. Everyone said in one voice that this kind of nonsense should stop and defended Mohammed Shami. How can he be blamed? If the batting line collapsed, how was the other player to blame? Such incidents hurt the sentiments of the minorities of the country. How can anyone be allowed to spew venom in the name of expression of thoughts? We are the subjects of the land which is known for broad thinking and which has given the concept of ‘Vasudhaiva Kutumbakam’ to the whole world. There should be no place for hatred in our life. Every religion deserves respect. Religion has its place and sports is a completely different ball game. Keep playing the game with sporting spirit! 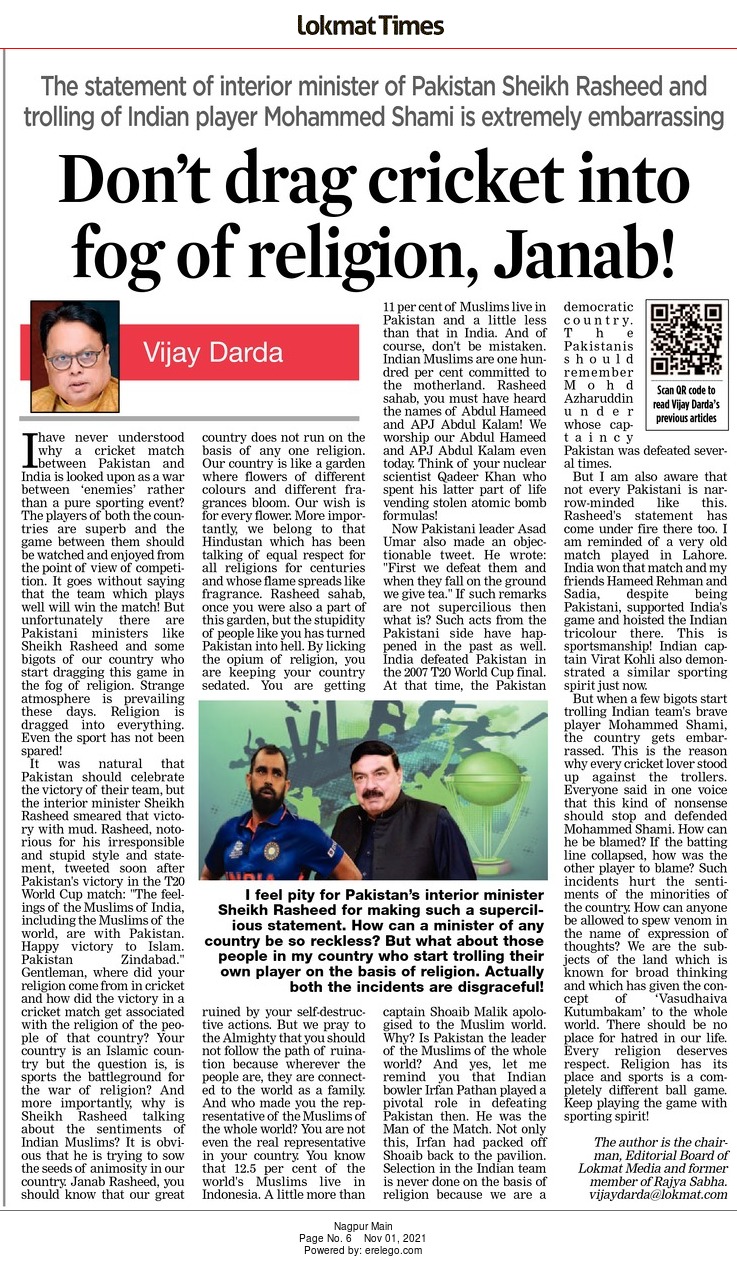