And then mock at the idea of India!

I have been mulling over this question for quite some time now. Even before the Bollywood Khan spoke out his mind on this sensitive issue. To quote, he said: “I sometimes become the inadvertent object of political leaders who choose to make me a symbol of all that they think is wrong and unpatriotic about Muslims in India… I have been accused of bearing allegiance to our neighbouring nation rather than my own country…”

When Shah Rukh Khan spoke these words, he actually voiced a grievance, not unique to his famous Bollywood persona. But something that is felt by more successful Muslims, who have to always walk more than the extra mile to prove their patriotism, and still live under the shadow of suspicion. In this media driven atmosphere, understandably there was a furore when he made this comment. Naturally, the first off the block were two Bharatiya Janata Party spokespersons Shahnawaz Hussain and Mukhtar Abbas Naqvi who did walk the extra mile and suggested to SRK that if he felt insecure in India he should opt for Pakistan.

Needless to say after this cue, the Pakistani side also jumped into the fray. Never ones to let go an opportunity to target the idea of India, two Pakistani characters – one who is supposed to uphold the law and order in that troubled neighbourhood of ours and the other who breaks the law with official patronage jumped into the fray. They offered SRK their protection. Both Pakistan’s interior minister Rehman Malik and the outlawed LeT chief Hafiz Saeed simply exposed themselves when they made this laughable offer.

It is laughable because Pakistan instead of becoming a safe homeland for the followers of Islamic religion, has been the killing fields for the Muslims. It is a fact that more Muslims are killed in Pakistan every year than in any other country. In the last ten years, 2003-2013, it is estimated that 45,000 persons-civilians, military personnel, and terrorists/insurgents have died in Pakistan. So, though the Pakistani establishment is surely responsible for creating terrorist outfits and supporting them, it is a fact that there is a bit of truism in their claim that now they too are victims of terrorism. But then as the old saying goes, as you sow, so shall you reap. Having played the foster father to terrorists of all hues, the Pakistani bosses have to suffer the repercussions.

But the Pakistani scenario is not a matter of immediate concern. For us the more important thing is how we treat our own people? Do we respect their sentiments? Do we understand the pain of their uncalled for humiliation when their credentials are suspected? Do we have an idea that a mega star like Shah Rukh who has married an Indian Hindu girl – Gauri, and worships Lord Ganesh with a 24×7 jyoti at his home suffers when he is penalised for being a Khan? Do we know that Farooq Shaikh another Bollywood actor fully respects the faith of his better half who is a devout follower of Jainism? Do we still know that Salman Khan too worships Lord Ganesh? Having visited their homes, and interacted with them about their religious and spiritual concerns, it bothers me no end that trapped in a warped mindset we have not yet been able to fully internalise the idea of a secular India – which does not imply an irreligious  India, but an India that respects all religions and does not discriminate on the basis of religion.

In this context, I  feel that our founding fathers erred while framing the Constitution, and included the right to propagate one’s religion in Article 25 of the Constitution as a fundamental right. As the noted jurist and my senior colleague in the Rajya Sabha Ram Jethamalani pointed out at the launch of the Nashik edition of Lokmat Times on the Republic Day (January 26, 2013), both Dr Babasaheb Ambedkar and Prime Minister Pandit Jawaharlal Nehru were opposed to this provision, but then the majority had a different view. This competitive religiosity has vitiated the atmosphere.

The plain and simple fact that has been established through the years is that barring the odd exceptions, the Muslims in India, like all other citizens have collectively and individually reposed their faith in the idea of India, and served the nation patriotically. They have been patriots to the core like the entire citizenry. At least, the Pakistani establishment has learnt this lesson the hard way. Way back in 1965, the Pakistani army had planned an ambitious Operation Grand Slam. The idea was to infiltrate army regulars into the Akhnoor sector in twos and threes and create trouble in the Kashmir Valley. The design was that once a critical mass is reached then there would be a Muslim uprising. However, even after 9,000 regulars had gathered, the expected local uprising was not visible. If this was a collective expression of patriotism, then the 1965 individual saga of the Param Vir Chakra winner Abdul Hamid still reverberates with pride. Single-handedly he destroyed three Patton tanks, before the fire from the fourth made him a martyr.

But whereas a chastened Pakistan now does not bank upon Muslims in India, the internal forces that seek to divide the country on religious issues are always  looking for the odd comment or anything that could further their divisive agenda. It is for them that cultural icons like SRK prove to be soft targets. They revel in his humiliation at US airports, when he is tormented for being a Khan. Though, it must be added that under the pretext of security, the US authorities too have committed inexcusable excesses while dealing with VVIPs like former president A P J Abdul Kalam and former defence minister George Fernandes.

Unity in diversity is not a hollow cliché for a country like India. For me, as a public representative, it is an everyday reality. Our citizens live with this concept. They go about their everyday life enjoying the richness of this diverse culture. But then there are the professional troublemakers. They are simply on the lookout for an opportunity to mock at the idea of India. Their efforts must be relentlessly neutralised in every walk of life. As Bollywood is the first place to do it, as all of India fuses in its culture. 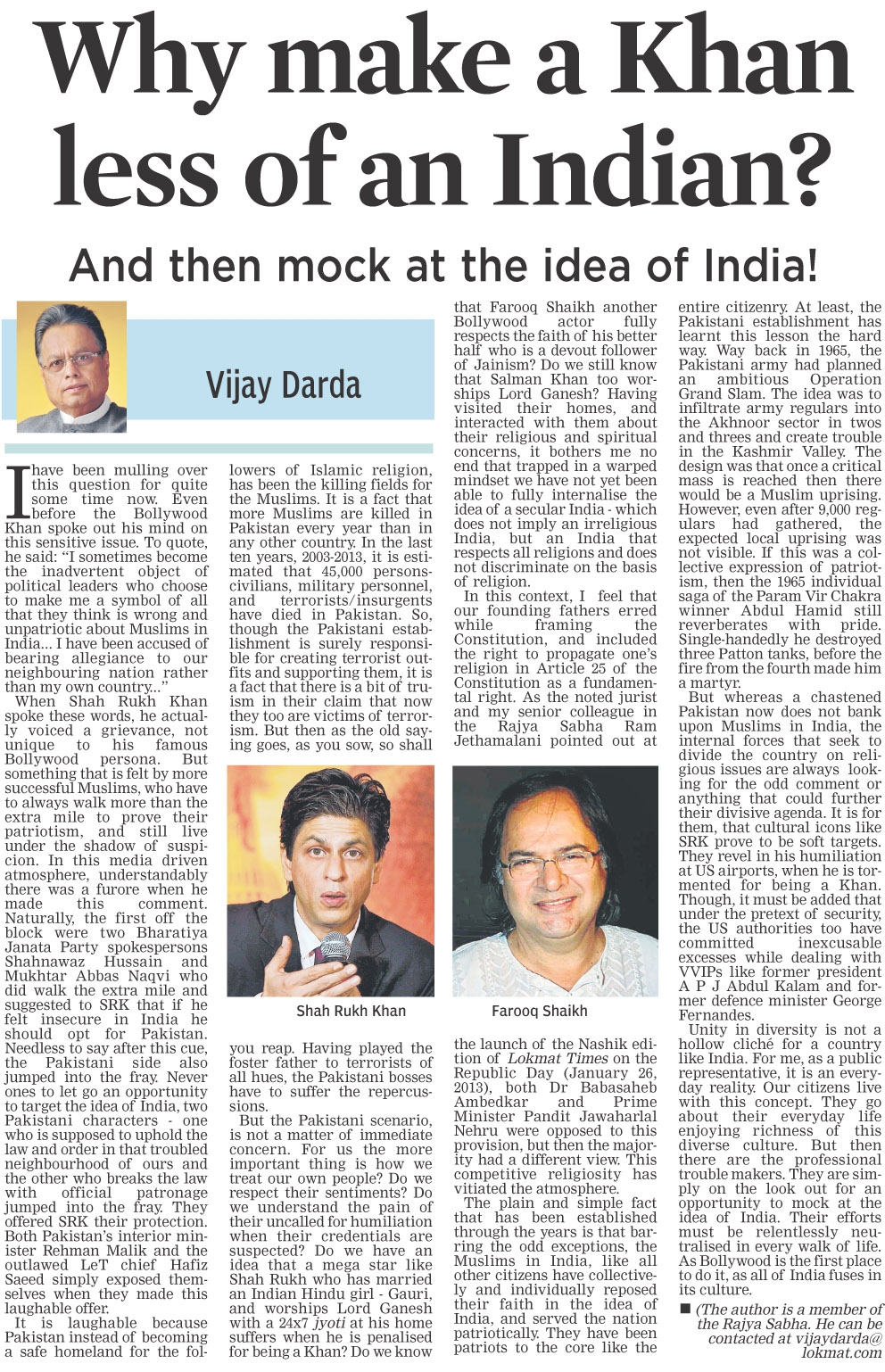