It would be unfair to dismiss the recent Bihar tragedy as a case of food poisoning, in the right perspective it is simply an act of murder. This was not a case of poison in food, but actually a case of food in poison. It was sheer criminal negligence. But then Bihar may be grabbing the headlines, but it is by no means an isolated incident. Inefficiency and callous negligence in the mid-day meal scheme has been an integral part of the supply chain right from its inception. Old-timers recall the horror stories of contamination in the “sukhdi” that was supplied in Maharashtra.

There is no doubt that as an idea the mid-day meal scheme cuts at the root of the problem of lack of education and the high rate of school dropouts. Poor parents do not send their children school only because they cannot afford the cost of education. But if the child is assured of a meal, then his school going is facilitated. The scheme is not just a welfare measure, but it is an incentive for promotion of education. Over the years it has grown in size and the annual outlay for the year 2012-13 was above 11,000 crores.

Experts do believe that the scheme is a success and it has reduced the rate of children in the 6-14 age group that are out of school. But then a holistic approach that should mark the implementation of such an ambitious and far reaching scheme is missing, and it is this attitude that is at the root cause of tragedies like the one witnessed in Bihar recently.

The concept of the scheme is that the Central government provides the food grains, and the state governments bear the cost of other inputs. In the rural areas the parents are supposed to contribute the effort required for cooking. The rationale being that no parent would like to feed his children with inferior material and thus the quality would be taken care of. Even in this incident, the lady who cooked the food is also sick and has lost her child.

It is because of this reality that this tragedy opens up the opportunity to introduce systemic and conceptual changes in the implementation of the scheme. The basic problem is that such an ambitious scheme that covers millions of children has to be in sync with modern technology and uncompromising hygiene standards. In our country we have the example of the Akshay Patra kitchens that are being run by ISKCON in Bengaluru and neighbouring areas. These are mechanised kitchens that serve lakhs of hot meals to school children in thousands of schools. The quality is such that even the then president Dr A P J Kalam enjoyed this meal.

The usual alibi that a government scheme cannot be run with the qualities of private sector or NGO traits has to be dispensed with some resolute political will. In the 21st century, India’s children can not be served with anything that is the second best or not of the highest quality. If necessary the involvement of the corporate sector as a part of its social responsibility should also be made mandatory in this cause.

One has also heard statements that because the government cannot run such schemes, it is better to stop them altogether so that at least such disasters are prevented. But one can also be sure that such prescriptions are ill-suited for a developing society like ours. Indeed, India needs the strengthening of the delivery mechanisms for welfare schemes like the mid-day meal.

Preliminary reports have suggested that in this case the cooking oil was stored in a container that was previously used for keeping insecticide. Now, such a fatal flaw crept in because there is no practice of ensuring any quality checks in the process of preparing meals for the school children. It is also because of the same lack of any quality control mechanism that we get reports of lizards etc. finding their way into the food with such murderous results.

We can avoid such disasters only if we institute mechanisms like the ones practiced by the Akshay Patra where the food is prepared mechanically and is untouched by hands. Considering that crores of rupees are spent as running expenditure, the government should not fight shy of making capital expenditures as well to create the high class infrastructure in a decentralised manner at the district or even block level.

The Bihar incident also brought forth our tendency to see politics behind everything. Now, it may not be a mere coincidence that the Nitish Kumar-ruled Bihar has suffered one blow after another in quick succession — first the blasts and then this poisoning — so soon after he decided to part ways with the BJP on the ticklish issue of the Gujarat chief minister Narendra Modi being made the national campaign chief. But then for any substantive allegation to stick to one needs evidence and not just the circumstance of coincidence.

Jumping to such conclusions and then missing the real failures does not serve anyone’s interests, lest of all of those children who go to the school with the fond hope of getting fed and also being prepared for the challenges in life. To suspect deliberate foul play in an affair related to the innocent souls like school going children is rather too much, and is something that cannot be done in the public domain without reliable evidence. But then it is a symbol of the decline in our politics that such allegations are debated in public. Tragically, the focus is not on rectifying the situation, but the emphasis is on winning the blame game. It is for this reason that our people end up as victims who are always on the losing side. 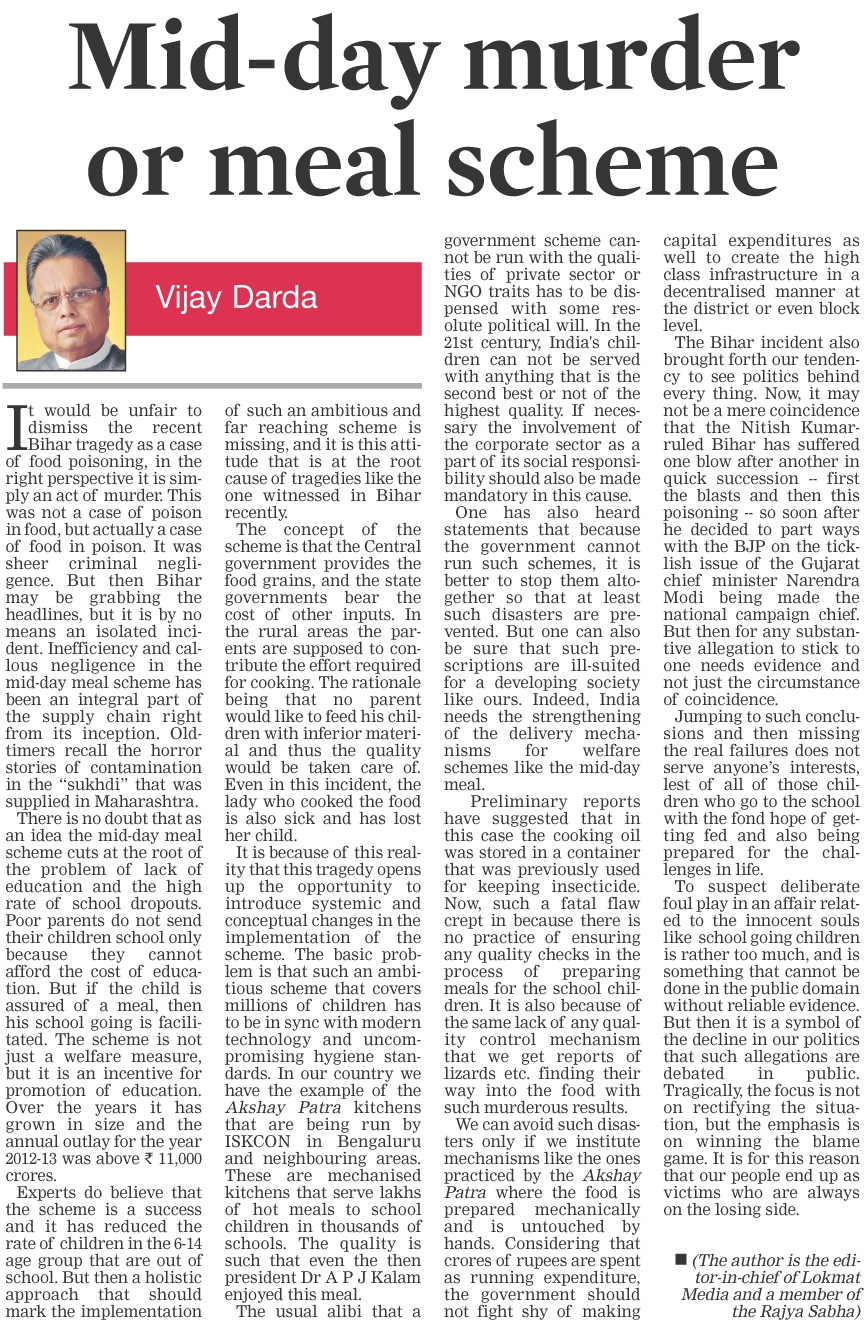