Pandering to extremists, ruining economy, Pak PM is running out of time

There was euphoria when Imran Khan left the cricket field and came to bat on the political pitch — the world felt that Pakistan had found a politician with the ability to get the country out of the quagmire it was in. Just as Jayaprakash Narayan gave the slogan of “total revolution” in India, Imran Khan gave the slogan of “corruption-free Pakistan”. His words found traction with the people of Pakistan. He struck a chord with the youth — lakhs would attend his public meetings. It was during this political journey that I met him and had discussions with him about Pakistan in London. He came across as earnest, with a genuine desire to bring about change. In his words and eyes, I saw the spirit of Pakistan’s progress and a message of friendship for India. He was moving ahead with a sporting spirit. His dream came true after 22 years of struggle and he became Pakistan’s prime minister.

Over two years later, one wonders: What kind of impression will Khan leave on the sands of time? Where did he go — or is going — wrong? Last week’s decision by the Pakistan Supreme Court to let off Daniel Pearl’s killer Omar Sheikh shows how fragile the system is. I have been to Pakistan several times and have become acquainted with the peoples’ battles and aspirations — they struggle with poverty and hunger and are blighted by corruption and unemployment. Terrorism is a dominant force, the intelligence agency and the army have always been powerful in Pakistan — today, ironically, they are seen as an inalienable part of democracy, Pakistan style.

Khan signalled a break from the past. Long before he became PM, he built a state-of-the-art cancer hospital in Lahore and schools and colleges as well. After becoming PM, he started his work with great simplicity. He even scaled down his government security to a great extent and did not use the government aircraft but travelled on commercial flights. He wanted relations with India to improve. He said that if India took one step, he would take two!

But neither could he move one step forward nor did India take two steps. The reason for this was the betrayal in 1999, when Atal Bihari Vajpayee went to meet Nawaz Sharif with a message of friendship and the Pakistan army inflicted the Kargil war. Narendra Modi had invited Sharif for his swearing-in ceremony and had also flown to Pakistan to meet the latter but India got nothing in return. As for Khan’s initiative, India felt that history should not repeat itself because the biggest charge against the Pakistan PM has been that he is the army’s puppet. Some of Pakistan’s old-timers and free-minded people say that India should have given Khan an opportunity, taking all precautions, and helped him to get Pakistan out of the morass. They argue that by not doing so, India fell into the ISI “trap” — Khan drifted away from India and the ISI and Pakistan army succeeded in their nefarious designs.

Today, both countries are forced to “burn” crores of rupees on the border every day. There is loss of life and property on both sides. Forget what the mullahs want. I can say based on my experience that the people there want friendship with India because it will benefit Pakistan immensely in healthcare, industry and trade. Today, dialogue has stopped and there has been a sharp surge in ceasefire violations by Pakistan. There is no let-up in terror and little hope that India and Pakistan will ever sit together to talk peace in the foreseeable future.

Imran has failed on both domestic and foreign fronts. Even before he came to power, the US had turned its back on Pakistan and the country had stopped receiving American bailout packages. Pakistan turned to its evergreen friend, Saudi Arabia, but met with disappointment there as well because of the Saudi-US alliance. Along with Turkey, Malaysia and Iran, Khan hoped for a new Islamic mobilisation which is caught in the big Saudi vs Iran rivalry.

Economically, Pakistan is on the brink. Still stuck in the FATF “grey” list, it’s dependent on China more than ever. China has given a huge loan to Pakistan but the interest rate is so high that Pakistan can never repay it. That is why Imran is being accused of “selling Pakistan to China”. The debt-trap has made Imran so helpless that he is unable to speak a word on the plight of the Uighur Muslims in China.

During our meeting, Khan had stated that no country can progress in the name of religion, indicating that he would keep the custodians of religion away. Unfortunately, he is today caught in the politics of mullahs along with the ISI and the army. The courts pretend to punish these outlaws but the factory of terror is allowed to operate with impunity. How can Khan stop this? There is no doubt that he is still seen as a leader with a clean image, but the affection that the masses had for him has started to wane. The common man is so upset with the inflation that the Opposition parties and the organisations that help the terrorists have succeeded in creating an atmosphere against Khan. Massive demonstrations have been held in almost all provinces of the country. In a country with a population of 22 crore, unemployment was already a serious problem and the pandemic has left 2 crore more jobless. Inflation is at a 12-year high. Imran Khan has about two years and nine months left in the present term. He stands by his slogan of building New Pakistan, but at present, that goal seems remote. It is sad. Khan’s failure would be like hope slipping away. 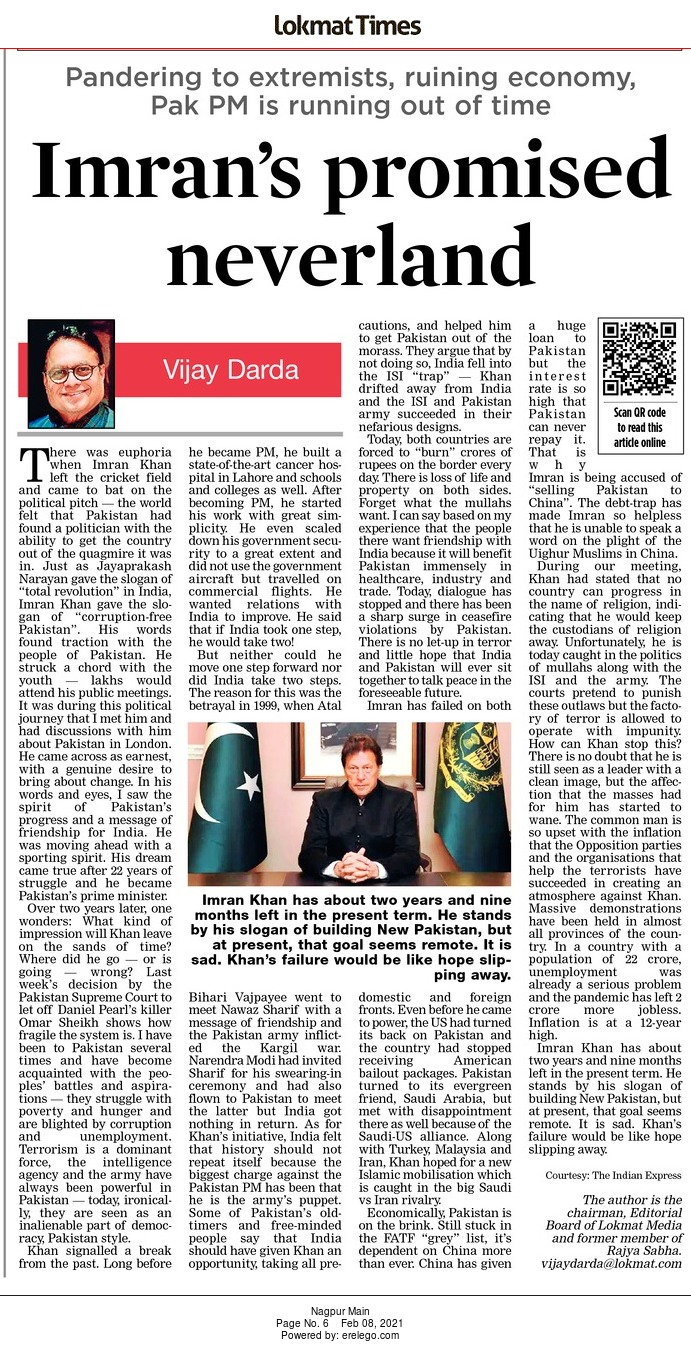