The Prime Minister of India Narendra Modi has resolved to double the oil refining capacity of India in the next five years. Similarly, to achieve the $5 trillion economy target, the inclusive development of all the regions of India is the prerequisite.

Taking this into account, the demand to set up a petroleum refinery in Vidarbha is gaining momentum.

For this purpose, apart from industry captains of Nagpur, the political leaders cutting across party lines have written a letter to the Union minister of steel, petroleum and natural gas Dharmendra Pradhan demanding setting up of a petroleum refinery in Vidarbha.

The Vidarbha Economic Development Council (VED) is making vigorous efforts to have a petroleum refinery set up in Vidarbha. Leaders across political spectrum have supported this move of VED.

In the letter sent to Dharmendra Pradhan, these leaders have stated in detail the injustice meted out to Vidarbha in terms of development, potential of Vidarbha for setting up such a project and benefits that would accrue from it.

All these leaders have demanded that the proposal moved by VED should be accepted by the Union petroleum ministry in toto and a techno-feasibility survey for the said project should be conducted to determine its viability.

‘Industry sector to get impetus’

Industry sector in Nagpur would get impetus if the said project comes up in Nagpur. As Nagpur is located in the heart of India, petroleum products can be transported to any part of the country from Nagpur easily.

‘Industries of Vid would get raw material, fuel’

Central India has 15 cement factories. Apart from this, there are two major airports, one each in Nagpur and Raipur. The petroleum refinery in Nagpur, apart from supplying fuel to these cement factories, can also provide raw material to various industries of Vidarbha.

– Vijay Darda,
Chairman of editorial board of Lokmat Media
and former member of Rajya Sabha

‘Allied industries to get a boost’

Petroleum refinery would support many allied industries and ancillary units in MSME sector of Vidarbha.

‘Petroleum products would be available at cheaper rate’

If a petroleum refinery comes up in Nagpur, industries of the region would get petroleum products at a cheaper rate and industries would get necessary impetus.

Several lakh job opportunities would be created through this mega project, costing `3 lakh crore. The industry sector of Vidarbha would go into fast lane.

Benefits for Vidarbha from the project 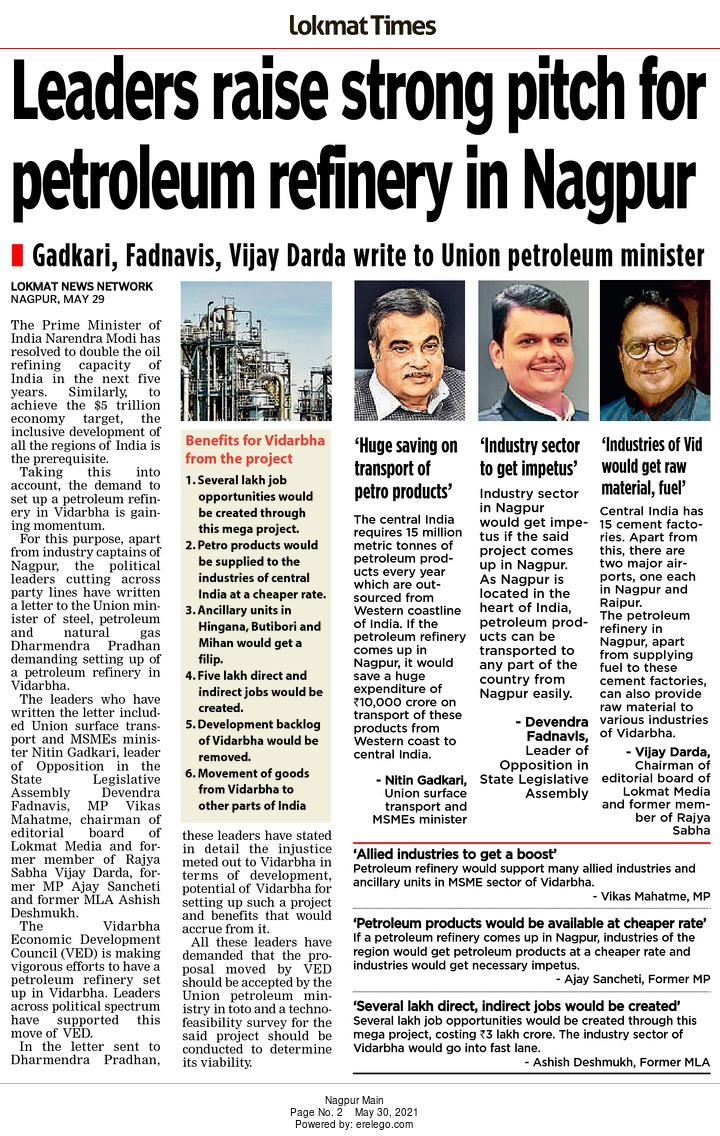 Why is our banking system so weak?