Masood Azhar is cat’s-paw for China!

Some incorrigibly optimist people in India were expecting that China could cooperate with the International Security Council to announce Masood Azhar as the global terrorist this time around. Actually it is difficult to imagine such a turn. China did what it was expected to do. It does not care that Masood Azhar is an evil face of terrorism at this time and it is very important to crack him down. China only cares for its own interests and that’s why China saved Masood for the fourth time in a row. Masood is the darling of Pakistan.

China serves its many interests in saving Masood. The first thing is ‘enemy of enemy is your friend’! China has always treated India as an enemy. Pakistan also treats India as an enemy. In this way China and Pakistan became friends. This friendship has not started today. It’s there from the beginning. In 1950s, China had widened the Karakoram Pass so that economic and strategic activities could be increased with Pakistan. The current round of China-Pakistan Economic Corridor is on the same lines. Here in 1963, Pakistan gifted the territory of Hunza Gilgit to China in the occupied area of Kashmir (PoK). This area is also called the Trans-Karakoram track.

Obviously, China has always kept trying to keep Pakistan under its own wings so that India could be disturbed. It is annoyed with India for giving refuge to Tibetan religious leader Dalai Lama and his exiled government. However, before Pakistan could move forward in friendship with China, the US jumped into the fray. America had problems with China and with India too because of India’s alliance with the Soviet Union. There was Cold War then between the Soviet Union and the United States of America. The US showered the dollars on Pakistan and the latter simply rolled in wealth. Thus Pak-US love story began to grow. Even today, Pakistan owes US $ 60 billion. When the US took the hands off it, Pakistan immediately crossed over to China. China was ready to welcome Pakistan on its lap. Since both had a common enemy in India, their relationship became cozy.

Now, look at this friendship in the context of Masood Azhar’s entry. This Pakistani terrorist was arrested in India in 1994, but the BJP government bent backwards before the hijackers after an aircraft was hijacked to Afghanistan in 1999. After this, he not only became a hero among the terrorists but also became the favourite of the Pakistani army. When the Tehrik-i-Taliban opened a front against Pakistan, then the Pakistani intelligence agency oversaw the entry of many terrorists into Jaish-e-Mohammad, the terror outfit led by Masood Azhar. Obviously, Pakistan has brought up Masood only to terrorise India. He has been supplied weapons by the Pakistan army.

China knows well that Masood heads a dreaded organisation and at this time it is too powerful! China also requires great support from him. Indeed, China has ruined the lives of Uyghur Muslims in its bid to crush extremism in its Xinjiang province. There the Muslims can not keep long beard and burqa can not be worn in public places. In 2014, there was a ban on keeping ‘roza’ during “Ramadan”. They were ordered to deposit the copies of the Holy Quran. The situation deteriorated to such an extent that the Chinese army caught hold of whoever they suspected to be religious, and put them behind the bars. These prisoners are called the Correctional Home by China. Millions of Muslims are locked up in these jails but it is astonishing that no Muslim country is raising the voice against ill-treatment meted out to Uyghur Muslims. China fears that if Masood Azhar is touched, then he could create a furore in Xinjiang province. Terrorists like Masood Azhar, Hafiz Saeed, and other terrorist organisations, which harp on the issue of Kashmir, have kept silence about the oppression of Uyghur Muslims.

China is also afraid that if it does not support Masood, then the $ 46 billion invested in the Economic Corridor will be stuck in crisis. Masood will not let it work in Pakistan. Since terrorism is part of Pakistan’s security policy, the army and its intelligence agencies will not be able to work for China. That is why China has been patronising Masood Azhar.

China has its own vested interest in protecting Masood Azhar, whom the Pakistani army has groomed. China has ruined the life of millions of Uyghur Muslims in Xinjiang Province. Everyone has kept silence on its action. 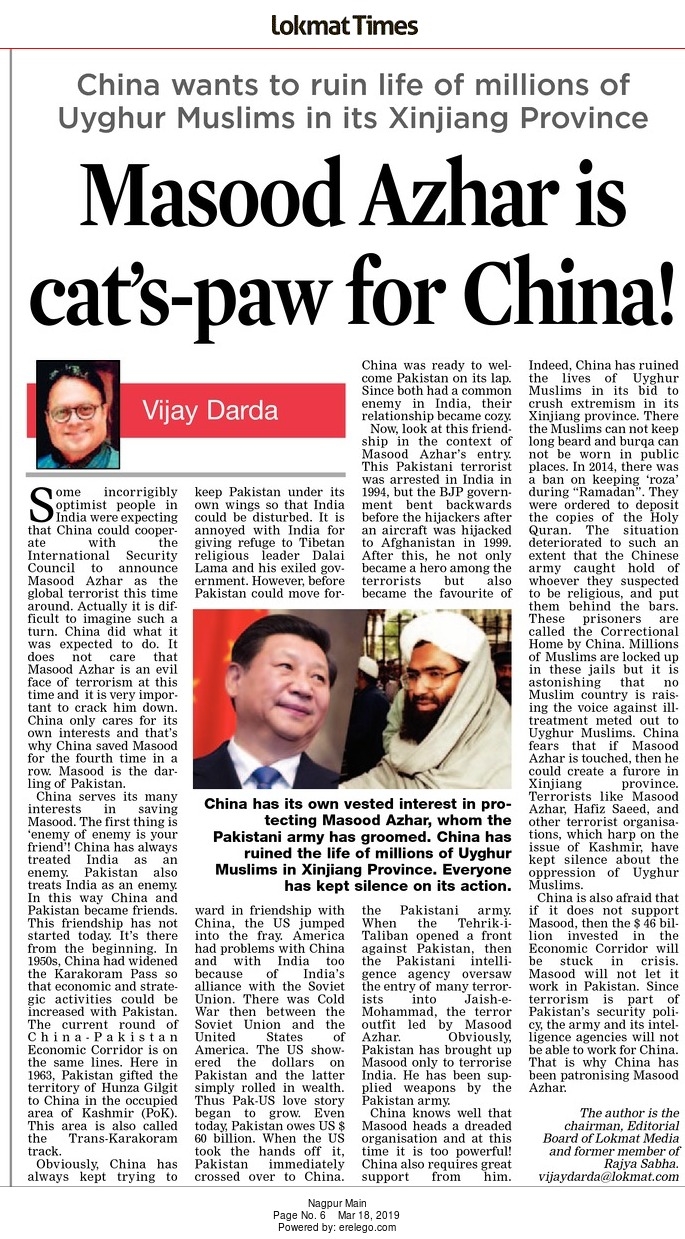