Meditation, only cure for illness of thoughts!

Excerpts of the interview with Swami Shivkrupanand by Chairman of Editorial Board of Lokmat Media and former member of Rajya Sabha Vijay Darda, Managing Director of Lokmat Media Devendra Darda and Senior Assistant Editor Atul Kulkarni.

What exactly is meditation in the yoga you talk about? How to keep consciousness in meditation? What to do to avoid thoughts intruding into meditation?
Unless you get at the core of meditation, all these things are not possible. Any disease can be detected by touch and sight. But that is not the case with thoughts. First the mind gets sick then that sickness passes into the body. There is no cure for illness of thoughts. The only solution is meditation.

Past and future thoughts keep coming up while sitting for meditation. The mind does not get stabilised. How to handle the situation?
When cleaning a well, the silt at the bottom of the well is stirred up. Same is the case with meditation too. It has the purity of consciousness. After meditating, you will see many things at the bottom of your life. You just look at it like a traffic cop. Don’t get involved in it. Those things will come, and they will go away. Once gone they will never come back. They clean the well by removing the mud; once the consciousness is purified, it does not bother again. Don’t try to stop the thoughts that come while meditating. Doing nothing is meditation! Ego and self-pity are two sides of the same coin. Once you realise that, there will be no problem in meditation.

We have honorifics like Guru, Sadguru… What is the difference between Guru and Sadguru?
The Guru is he who gives knowledge. Then he can be a teacher, a swimming coach, a driving instructor, or anyone else. We consider women as mothers, but the mother is one. Sadguru too, is only one. The search for God ends when he comes into one’s life.

All the differences like religion, caste, country, creed, party were eradicated by an epidemic and the religion of humanity came forward. But beyond all this, there are endless difficulties in living as a human being. How to overcome them?
The positive emotions created by meditation are important. Our seekers do not call the epidemic period as ‘corona’ time. It is called the ‘Karuna’ time. The spread and dissemination of knowledge was highest during this period. This epidemic has taught us the most precious lesson that howsoever hard one may try to divide mankind on superficial grounds, the fact is that all human beings are alike. Saint Kabir had said, “Moko kahan dhoondhe re bande, main to tere paas mein” (Where are you seeking me, O devout, I am with you ). It means God is inside you. When you stop going to the temple, you will be able to see the God in you. But when will you see him? It is when you meditate! If you accept the path of meditation, the negativity in you will go away. Once you rid yourself of negativity, good things will automatically start appearing before you. Bad things happen with good things. But more important is where your consciousness is!

The younger generation has the potential to change the world. But the real scenario looks different and disturbing. Is it the fault of the youth or the older generation who have failed to inculcate good moral values in them?
If it is considered a fault, then it can be ascribed to the company you keep. If a man has two children, one of them lives in the company of good boys and becomes a very clever scholar. The second boy plays with bad boys and acquires their bad habits. He becomes a bad boy. How can you blame your father? Right from childhood, we keep teaching children… don’t do this, this is a sin… do this, this is a virtue… But we don’t tell the children how to go about it. Older children make mistakes and then go into self-pity. Such things as sin and virtue are not taught abroad. If someone does something wrong, he is told that it is a mistake, and he understands it too and does not repeat it. We however, keep the children trapped in the cycle of sin and virtue right from the childhood. Either stop these things or teach the children how to get out of it.

You are a scholar of Jainism too. Have you seen Jain sages in the Himalayas too?
Unless the Himalayas call you, you can’t get there. When I was called, there was a group of 45 Jain Munis there. The second time, there were 65 of them. My Guru had sent me there to overcome my ego. I would go there and teach them meditation for six months and then go to solitude for another six months. Having control over the ego does not mean that it reaches your heart. You get control over your body, more importantly you get control over your consciousness.

Doing yoga to get the body in shape is wrong! Swamiji, what exactly is the difference between doing yoga, pranayama and Dhyanyog?
Doing yoga poses is not complete yoga. One of the different forms of Ashtanga Yoga is performing yoga poses. Those who do yoga to make their body look beautiful and in shape are groping in the dark about the real purpose of yoga. If this notion is not changed in time, the misconception that “yoga too is like that” will be created. Half knowledge is a dangerous thing. With yoga, the mind focuses on the body. The main objective of yoga is to awaken the self-consciousness by taking focus off the body. But the more you focus on the body to keep it in shape, the more your mind will be distracted, and this is all against yoga. We are drifting away from the main objective and that is why I am strongly opposed to such kind of yoga. 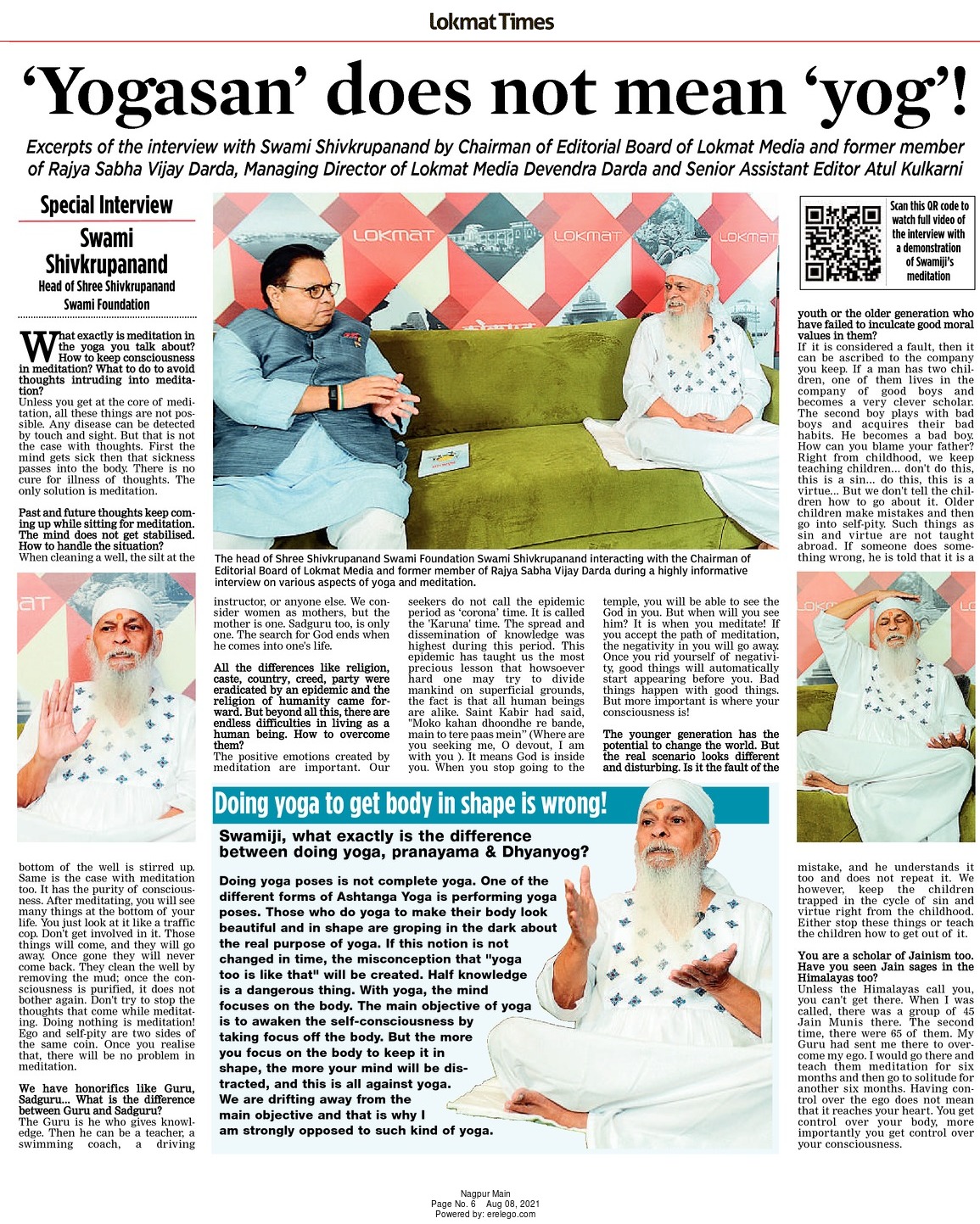 This storm of hatred will erode democracy