For the last two months or so, we witnessed an interesting spectacle. Normally, unless it is a disaster of gigantic proportions or something like a war, media outlets do not chase a story for days on end without break. But here was the case of a person who had sought ‘leave of absence’, yes, initially for a period of a few weeks that kept on extending. However, there was a ‘missing in action’ tagline, and an impression got created as if the most important thing to know was where is Rahul Gandhi?

Now, we all know that he is also the person who has been pilloried as the one responsible for the ‘decimation’ of the Congress. So, the logical response would be why bother about some loser? But then the Indian media’s concern for him is really touching. Someone would argue that so concerned are they about the healthy functioning of our democracy that they not only bother about the prime minister, but also hunt for information about a reluctant leader of an Opposition party. Be that as it may, one thing needs to be accepted without any qualifications.

It is purely Rahul Gandhi’s personal prerogative as to when he wants to take leave or go away from public gaze. Nothing whatsoever gives anyone the right to pry into these matters. It is time that we learn to honour this element of personal privacy. People in every walk of life do take such breaks and normally their colleagues welcome this in the hope that the person would come back and devote himself to his assigned task with renewed vigour. During this period, they switch off their mobile phones, do not pay attention to the news media. But they are not ‘hounded” like the way Rahul has been.

The argument that he is a public person, and thus the media as the surrogate for the people has the right to ask such questions does not hold water. No one can argue that the public persons do not have private spaces. If anything this is a matter between the public and Rahul Gandhi. In this respect, both the sides are quite adept at dealing directly with each other. The public knows how to treat a leader, and as a leader Rahul Gandhi is fully aware of his responsibilities to the people. So, if the media behaves as if there is a house on fire simply because Rahul is “MIA” it hardly serves any purpose. It also shows that the media is still in a evolutionary stage about its role and functions.

But the past few weeks have also thrown up some interesting questions. For instance, when all sorts of queries are raised by politicians, mediapersons and commentators about Rahul Gandhi not being present in parliament or doing his duty as the party vice-president, it does bother the mind as to what is it that concerns these folks? After all during his last 10 years as well, he has not been participating in the parliamentary proceedings. Nor has he earned any great reputation as a public speaker or debater, so what is it that bothers them? Are they worried about his absence or concerned that a “Gandhi” can really make a lot of difference? Frankly, they would not care about him if he did not belong to that dynasty. But let us all remember that it is the dynasty that keeps getting all the fire for being at the root of all that is wrong with our polity.

However, all these issues belong to the past, but these have a relevance still on the way we conduct our public discourse. For now the attention shifts to the fact that what happens next when he is back. In clear terms, the battle has been joined. The media and the public have been pining for the Modi versus Rahul gladiatorial contest. To be fair to the Prime Minister, he has never shied from this battle. He emerged victorious in the electoral contest last year. To make it doubly sure that he had not lost even a bit of his panache and chutzpah, this Sunday, he fired the first salvo even before Rahul could reach the Ramlila Maidan. That Rahul did not flinch and packed all his punches is the new thing in the equation. True, there are questions about his consistency and staying in power, but then these are matters of detail when it comes to settling a contest. The moot point is that the battle has been joined once again.

The good thing about the Modi-Rahul contest is that it is not just a battle about the two of them as persons. The two sides represent different ideas and world views. Indeed, for the first time, India’s domestic political battles have crossed the shores of the country, and as the Prime Minister woos the desi foreigner in alien lands the tune that ‘nothing has been done in the last 50 years’ that is a short hand for rubbishing Congress echoes on foreign soil as well. More importantly India’s image in foreign lands has also become a domestic political issue. So long, this was the preserve of bipartisan national consensus.

The parliament resumes after the budget recess, and all attention would be focused on the Land Acquisition Ordinance. It would be a test for the Modi sarkar to get the Bill passed by the Rajya Sabha, where it is in a minority. The dice is loaded against the government, more so as the Janata Parivar has consolidated and the erstwhile splintered groups now form a solid chunk of 30 MPs in the House of elders. For a government seeking the comfort of numbers this could also represent another formidable obstacle. The next few weeks would be offering us interesting times in the political domain.

The BJP-PDP coalition in Kashmir was never going to be an easy affair in so far as a day-to-day governance is concerned. Besides, the proclivities of the chief minister Mufti Mohammed Sayeed as far as the separatists elements in the state are concerned were also well known. This is route that the country has travelled in the past. So, while the incidents of waving the Pakistani flag are concerned these are not unusual. However, the risk is that such incidents lead to chain reactions that disturb the hard earned peace, and could end up costing innocent lives. Both the state and Central governments should guard against this. 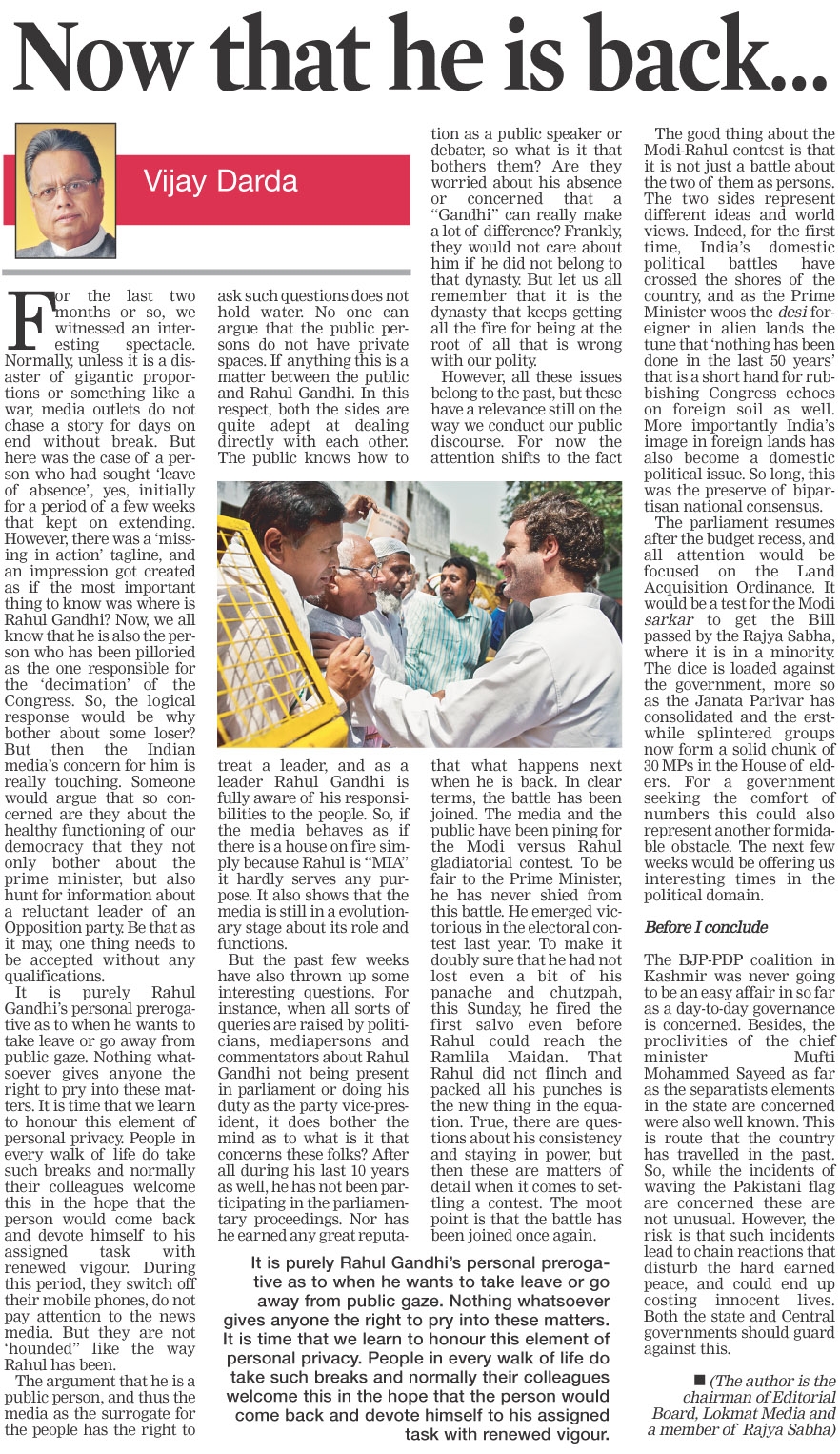