The youths will have to be saved from drug abuse, for the whole country will be ruined if the younger generation goes astray

I am directly addressing you because the agencies that act against the drug trade are under the control of the Central government. The second reason is that you are strongly opposed to the growing drug addiction among youths. You may not have had the time to pay attention to this issue due to your multiple commitments and work pressure, but this is the most pressing issue today. If you make up your mind, you can eliminate the drug trade because you possess that determination. For once, we may ignore economic offences for some time. Smuggling of wood to medicine and gold and silver can be ignored for once but we cannot allow the spread of drugs into India. No Indian would want to, no parent would want their child to get addicted to drugs and be ruined. Everyone who got into the trap of drugs was ruined.

I would illustrate my point by giving an example of my own state Maharashtra. There are three important centres here – Mumbai, Pune and Nagpur. When I used to study in college in Mumbai, the picture of ‘Bhole Baba’ in any paan-cigarette shop was an indication for the people to understand that it sold drugs. I am talking about the 1968 era. Since then, I see that this illicit trade has continued to grow. Today, drugs are easily sold near schools and colleges. There are reports of drugs being sold even near the police station and the police headquarters. It is a matter of great sorrow and misfortune that the state government turns a blind eye to it. People feel that the police have full knowledge about this illicit trade. So what prevents the police from stopping it only they can tell!

Today, Pune has become a hotspot of drugs business. Pune has the highest number of students and most of them are from outside. Drug addiction is spreading rapidly among them. Nagpur is also one of the secret bases where underground activities are carried out unhindered. It is said that Nagpur is the centre of distribution. This drug addiction is so bad that when young men and women get nothing, they consume balm or cough syrup. The Narcotics Control Bureau and the National Investigation Agency have also been monitoring Nagpur, but the kind of strict action that should be taken is nowhere to be seen.

Uddhav Thackeray ji, you are the chief minister of Maharashtra and I know that you have zero tolerance for drug abuse in Maharashtra but unfortunately people are falling prey to this menace on a large scale! Even foreigners operate drug trade in Mumbai. So the question is why was investigation not initiated or strict action taken when the videos of Karan Johar’s party or other rave parties appeared on social media? Carrying or consuming drugs is a serious crime, so why were they not caught under the law? I would like to thank Kangana Ranaut for showing courage to raise this issue. She has adopted an aggressive stand on the issue of substance abuse.

This issue is not exclusive to Bollywood. Even Tollywood and the regional film industries are under its grip. Obviously, we use something when we have it in abundance. Drug menace in Punjab has reached its peak and attracted a lot of opprobrium. But even Bihar, UP or Rajasthan are not far behind Punjab! Delhi’s schools and Delhi’s rave parties have attained notoriety for drugs! People say that many politicians have also participated in these parties. Who does not know the activities of Delhi’s farm houses? There was a time when people used to ask questions to politicians and the latters were afraid. Now no one asks questions nor is anyone afraid.

It is our misfortune that India has become the hub of the international trade of drugs. Drugs dispatched from Pakistan, Myanmar and Nepal borders, besides Mexico, reach India via Brazil, Africa, Dubai through the Arabian Sea route. Terrorist groups are involved in this drugs trade. They are destroying the lives of our youths and also making money for purchasing lethal weapons. Drugs and arms dealers run parallel governments all over the world. The US has succeeded in putting an end to this menace to a great extent, but if we do not take effective steps to break this nexus in India, the time will write a painful story of destruction.

The Interpol, World Narcotics Association and anti-terrorist agencies meet every year. They have also mapped out the drug hubs. Our officials also attend those meetings. If a concerted action is taken with international cooperation and the policy of ‘zero tolerance’ is adopted towards drug abuse, it will not be very difficult to wipe out this menace from India. After all, why are drugs not available in Singapore? This is because drug traffickers get the mandatory death sentence in Singapore as those found in possession of dangerous drugs are hanged irrespective of their status.

In India too, we have to adopt an effective approach because this country has to be saved. If the younger generation survives, the country will survive. Once a person gets addicted to drugs, no one can save him or her. A reflection of what this addiction could lead to was seen in Delhi when a drug addict indulged in an indiscriminate shootout. Against the backdrop of the growing menace of drug abuse among youths in the country, I feel horrified to think how I will be able to save my family members. Just a thought is enough to send a chill down the spine. The very thought that your near and dear one is addicted to drug or substance abuse is enough to trouble your soul. Every parent is afraid of the drug addiction and wants to keep the child away from it. And therefore, we all have great hopes from you, Modi ji!!

I would like to thank Kangana Ranaut who has brought the issue of drug and substance abuse once again into the public domain through her aggressive campaign. It is indeed unfortunate that our younger generation is getting addicted to drugs. The country will be ruined if the younger generation is not saved from this peril. Now Modi ji is the only hope, for he has the grit to eliminate the drug mafia. 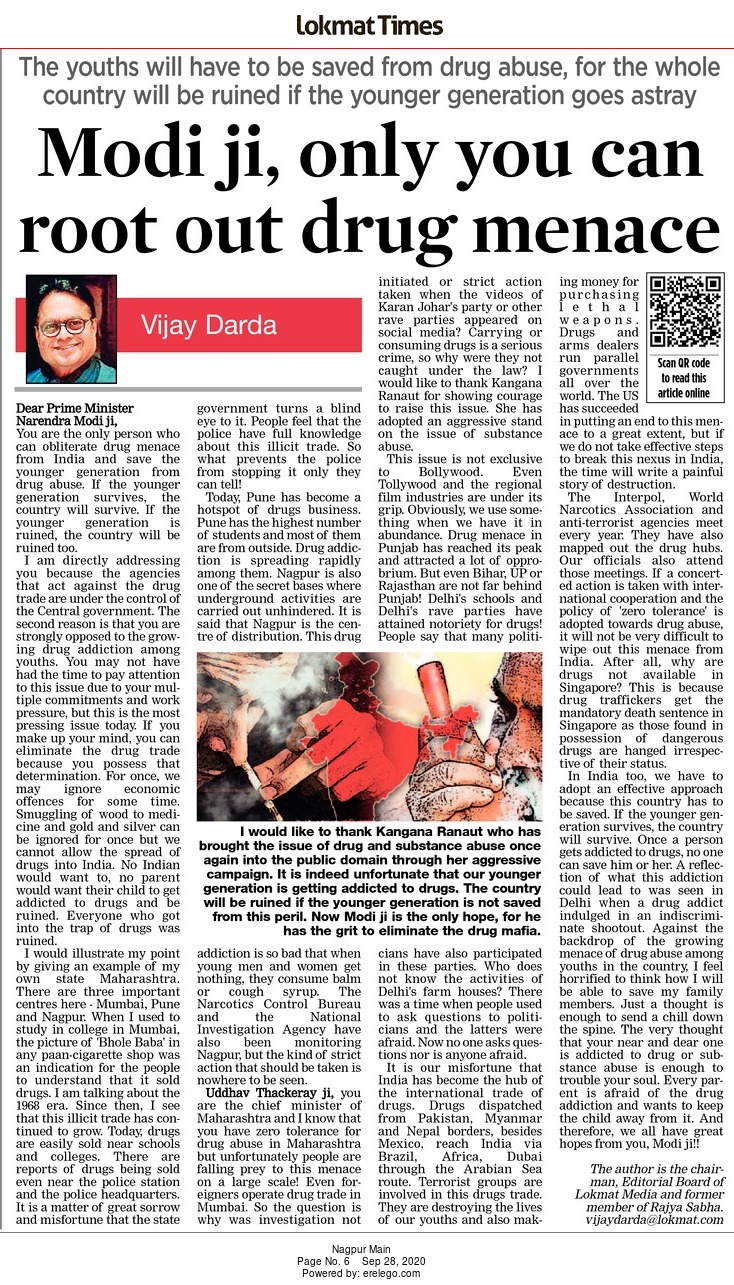 Freedom of speech alright but not rank abuse(

Russia has stood by India’s interests