During the difficult time of exacerbating tension, the attitude of Indian and Pakistani electronic media was extremely irresponsible and wayward

At a time when the whole world is worried about the escalation of tension between India and Pakistan, the electronic media of these two countries is busy ratcheting up fierce hysteria and stoking the fires of reprisals. When the Indian government is observing restraint and all the opposition parties are adding their positive vibes, our electronic media is whipping up nationalist frenzy. Some anchors yelled and bounced as if they will now reach the border and start the war. An Indian channel set up the war room. It seemed as if the war is just about to break out. The anchor of another channel was shouting slogans like Bharat Mata ki jai as if participating in a rally. Everybody shouts out Bharat Mata ki jai. Patriotism is in the heart of the whole country, but there must be some rationale.

On the day the Indian air strikes were carried out, war-mongering anchors of some channels reached the border. It is a different matter that they were far away from the border but they were striking such a pose as if they were standing on the Line of Control. Some anchors also wore military uniforms. Through computer graphics, it was being explained how missiles could be fired at which locations in Pakistan and how Pakistan can be devastated. These channels made a lot of hue and cry. Such condition was not only in India! The Pakistani channels were moving two steps further. Their anchors were saying that Pakistan did not make an atom bomb to keep it on the table or to decorate it. They were showing with graphics how the atom bomb would fall and how Delhi would be wiped out. Some Pakistani channels were indulging in mimicry. An Anchor of Sama TV said Tauba Tauba hundreds of times in the same bulletin. Some of Pakistan’s anchors were just going bonkers.

Even our anchors were whipping up nationalist hysteria and are still screaming as if struck by a seizure. They were foaming at mouth to point out which route the Indian Army will take to enter Pakistan, how air strikes will be conducted and how the Navy will surround Karachi. The most surprising thing is that many retired officers of the Army were present at the studios of these channels and they were also going crazy. Nobody told the anchor of the channel that such maps should not be shown to us. We should not tell which fighter plane of Indian Air Force can do what, and how. Were the retired officers of the Army who were sitting in the studios, not able to understand that the enemies should not know about our move!

In fact, the attitude of the two countries has been reflected by the media; it is like pouring oil in the fire. So far the government did not say how many terrorists were killed in the air strikes that India conducted. No answer was provided to this question during the Army’s press conference, so how come the media arrived at the figure of 300 to 350? I am saying this because I am a mediaperson too and we have learned that there should be no news break without any proof. Surely the sources are trusted but some base should be there! The media should try to reach the bottom of the news. After the Pulwama attack, it should have tried to reach the bottom of the matter as to how come such a massive amount of gunpowder reached the most protected state? Where vehicles are checked at every checkpoint, how did one terrorist reach the CRPF convoy carrying so much explosive?

Actually after that, all the media attention got diverted to air strikes and the Pulwama incident was left behind. In their race to stay ahead of the competition, our electronic media does not feel the need to pay attention to the incidents that have taken place in the past. They were in such a hurry that they telecast whichever footage they got without verifying its authenticity. Many fake videos were telecast by our media as well as Pakistani media. When Imran Khan talked of handing over Wing Commander Abhinandan to India to de-escalate tension, the media screamed that Imran was scared! It is high time we thought whether this attitude of the media is right?

I am not talking about social media because there is total anarchy and chaos in the cyber world. It is not known from where the news is coming, nothing can be known. So many lies are being served that the truth has lost its space. I am happy that the print media has acted and reported responsibly. In fact, every part of the media needs to understand that the whole country relies on it. The media should refrain from such acts that will dent their credibility. Remember that after the 9/11 attacks, the American media did not whip up frenzy. On the contrary, it reported with utmost responsibility, because frenzy is not the solution to the problem.

Regardless of times we live in, it is but natural to expect responsible attitude from the media. But in the days of Indo-Pak escalation, the electronic media of both the countries is ratcheting up hysteria in the name of nationalism. It would not be far-fetched to say that the attitude of the media has been nothing but hysterical and irresponsible. 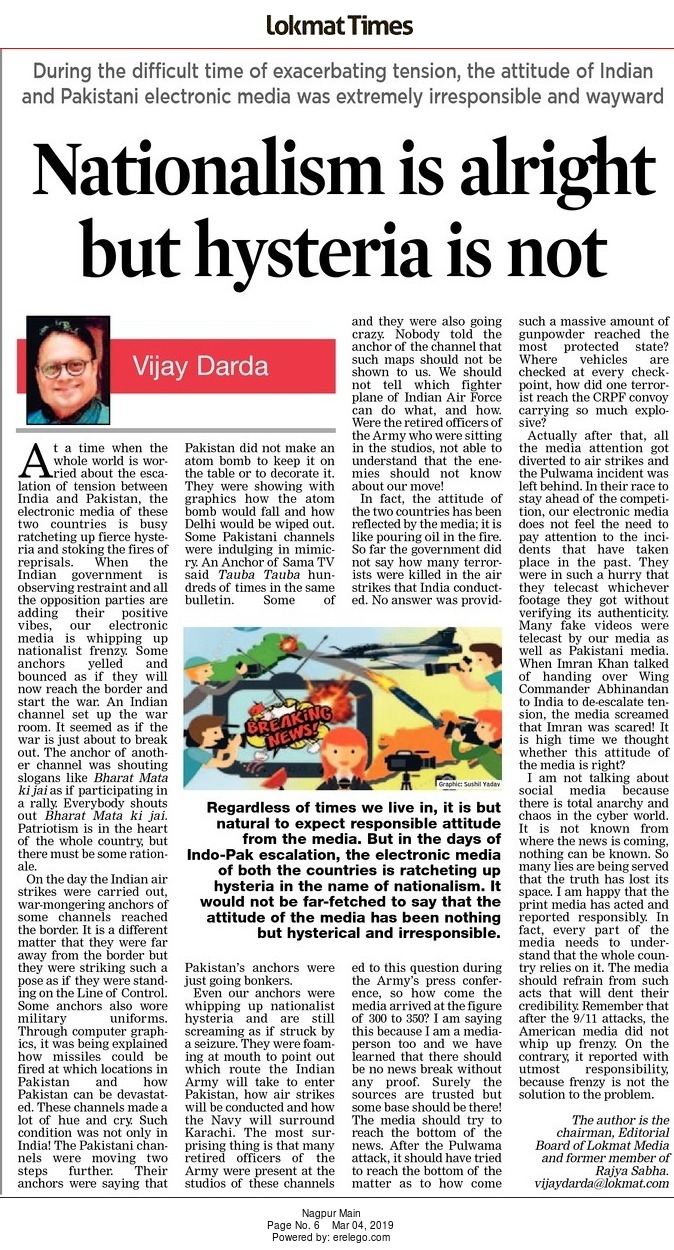 How far does misguided patriotism take us?

Global escalation is a warning bell