The Congress vice-president Rahul Gandhi made himself available to the most intense grilling at the hands of the country’s acutely aggressive television anchor for over 80 minutes. There was no question under the Sun that was not put to him, and by any standards it went on for such a long time that is pretty unusual for such interviews. There have been diverse media reactions to this exercise, and of course the partisan nature of these is quite understandable. Politics is all about being partisan and a sharp division of views is the core of all such activities.

This exercise came in the backdrop of an atmosphere that is being drummed up in the public domain that he is ‘afraid’ of losing to the BJP’s prime ministerial candidate Narendra Modi, and hence has opted against being named as the party’s prime ministerial nominee. Those who are trotting out this line of argument are also mocking at the rationale put forward by the Congress party that the elected MPs should decide the prime minister as this is indeed the constitutional position. They are also making out a case that Rahul Gandhi is a reluctant prince, and hence does not want to face this challenge.

It is to Rahul Gandhi’s credit that in the course of the grilling he came out very strongly and clearly on both these aspects of this ‘prime ministerial nominee’ business and his reluctance. His message earlier at the AICC session and through this interview has been the same-should the Congress come to power and if the MPs elect him, then he has no problem in being the prime minister. Then again to those who have been presuming that he has already accepted defeat in the 2014 elections, he has asserted that the Congress would defeat the BJP or else he is ready to accept the responsibility.

However, if Rahul Gandhi appears to be different from other politicians, then it has to be understood that this perception has its roots in some of his core beliefs that he outlined during the course of the interview. The most important of these being his assertion that he is not driven by the desire to get power and keep a hold on it. In the current atmosphere of cutthroat politics, where every politician worth his name is trying every trick-dirty or otherwise simply to stick to his chair, such an open commitment by anyone is the most positive proof of sincerity. It is in this context that all the other usual bunch of questions thrown at him are surely superficial ones. They get relegated to the status of being insignificant non-issues.

If we look forward through this perspective then Rahul Gandhi’s most significant step in the context of the 2014 General Elections is to usher in a new process of selecting party candidates through a system of conducting primaries in 16 Lok Sabha constituencies. This puts into action his idea of opening up the system, and allowing others than the ones belonging to the closed coterie a chance to become players in the power game. The fact that this idea itself faced resistance from two Union ministers — Kapil Sibal and Krishna Tirath — shows the odds that are stacked against him. But then he would be pushing it regardless, and this is a measure of the commitment that he has to the process of change.

Ten years of incumbency and some of the actions of the UPA government have created an avoidable crisis of credibility, and battling this is one of the most difficult challenges confronting Rahul Gandhi in these elections. Besides, there are some inherent institutional defects within the Congress apparatus that render the process of overcoming these challenges all the more difficult. But this does not take away the over-riding factors from the historical strength of the party. It has faced difficult electoral situations in the past, and then bounced back. This happened in 1977 and then again in 1999, but neither were its numbers as pessimistic as being projected now, nor was the morale lower. So, whatever be the 2014 outcome the Congress and its idea of India both are here to stay. Indeed, it is in adversity that the true worth of a leader is tested.

In the run-up to the elections, Rahul Gandhi would be having many more such media encounters, and they may be of varied durations, but it would be interesting to observe if the BJP’s prime ministerial candidate also opens himself up to the same level of public scrutiny, and with what level of openness. He does have his media exchanges, but rarely has the interviewer displayed the same level of aggression that is reserved for the other side.

The year 2014 is not a run-of- the-mill election for the Indian democracy. It is not just an occasion to decide as to which political combination would rule the country for the next five years. It is a contest between two world views of India. The one represented by the Congress, and the other by the Rashtriya Swayamsewak Sangh. Shorn off all the flab, it boils down to a battle between a plural and diverse India on the one side, and a Hindu Pakistan on the other side, where all others except the Hindus are treated as second class citizens. The RSS has taken a conscious decision to opt for Narendra Modi as the prime ministerial candidate, because he is the best mascot for the idea of a Hindu Pakistan. On the other end, Rahul Gandhi is the best man to counter this idea, and pitch for a plural, diverse India in all its dimensions. 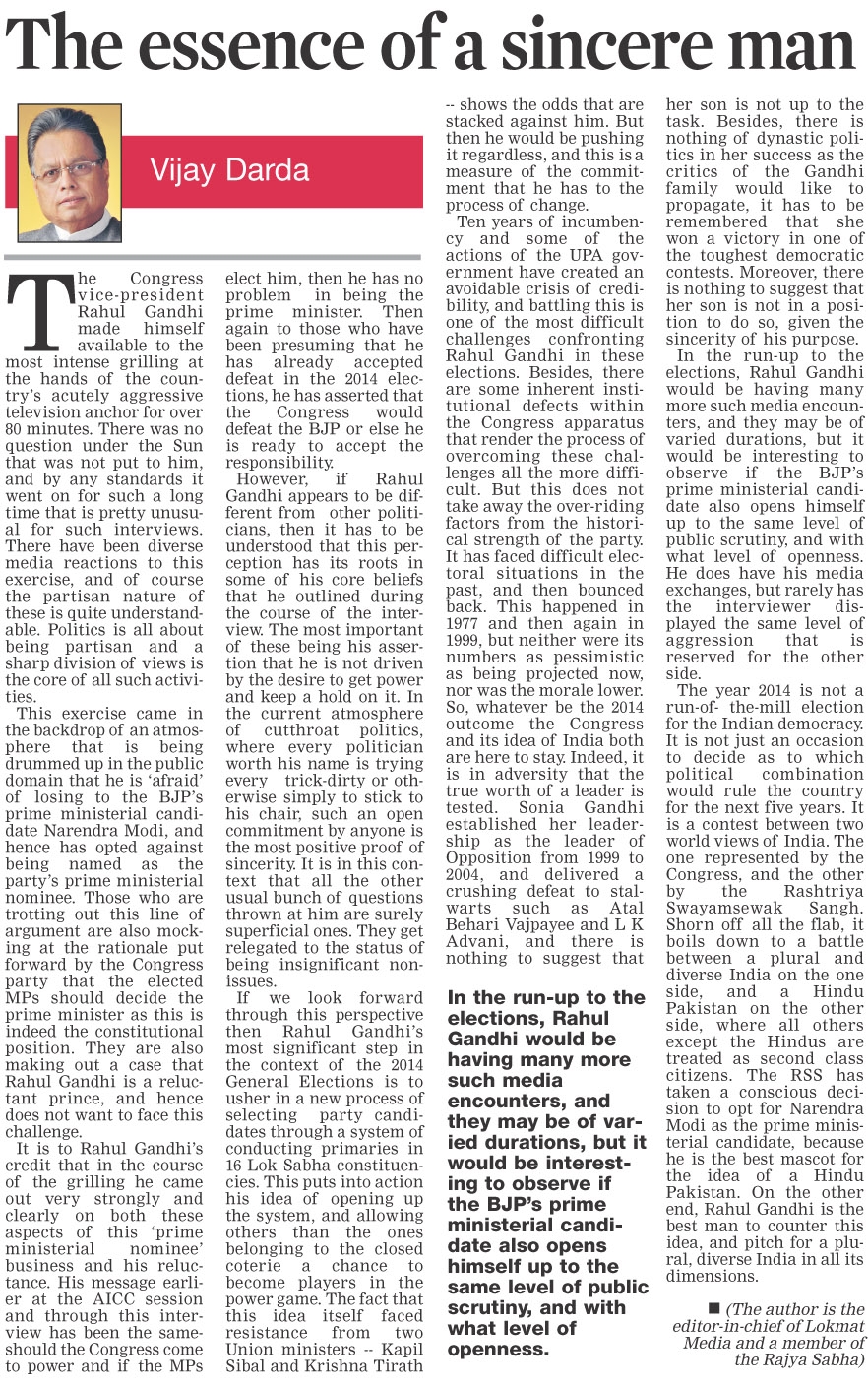