The entire government machinery was puzzled, where did Param Bir Singh go missing?

It’s been great that at long last you have turned in, Mr Param Bir Singh! Greetings to you on behalf of the people of Maharashtra! Your appearance calls for a celebration! Your appearance day should be celebrated the same way as that of saints and sages. The date of your appearance has also been recorded in the book of history. Yes, of course why not? How hard you got the police and intelligence agencies to chase you, how many of them got dead tired chasing you and how many of them were reduced to tears! You are in a class beyond compare! Actually we were anxiously waiting for you for a long time! Better late than never! At last you have turned in. Is your appearance any less than a miracle?

Mr Param Bir Singh, I was really longing for you. Everyone was wondering where you went missing? How did you vanish into thin air? Did anyone cause your disappearance? How would you have dodged the red corner notice? Have you changed your appearance? Did you undergo plastic surgery? Tell you what! Your disappearance fired up people’s wildest imaginations! Everybody had something to say about you! Someone said you were staying in Belgium. Someone else said you had relocated to London. Some people claimed with great pride about having tea and breakfast with you. What could we have done? Just kept listening..! Whom could we have trusted? We just had faith in you and also believed that one day you will definitely come and tell us how you managed to escape the eyes of your department as well as dodge the smart agencies of your country. I think you should conduct training camps for police and intelligence agencies to see what vanishing tricks can be employed. Once the detectives of the agencies become aware of your art, learn your skills and master the nuances, it will become easier for them to nab the accused.

The art of dissimulation that you have demonstrated has failed even Anil Kapoor of Mr India and Amitabh Bachchan of Bhootnath fame. Both of them acted wonderfully on screen. Actually you did all that stuff too, though off screen. I want to thank you that you have also exposed some time-honoured institutions. The first is that the Mumbai police, which is equated to the Scotland Yard police, can so badly be defeated by its single officer in a game of hide and seek. You have also busted the myth of the invincibility of the intelligence agencies which consider themselves as ‘Turram Khan’ or supreme ones. You have proved to them that just one police officer can send them on a wild goose chase. The agencies kept running from post to pillar yet drew a blank. The court declared you a fugitive but amidst all this drama you were relaxing in Chandigarh. How amazing, isn’t it! Wow! I feel like doffing my hat to your skills. People are asking a wrong question: Who among you all three– you, police and intelligence agencies is the most powerful?

You are the emperor of the police department. Even the ones who witnessed your mood swings don’t know who you are, how you are, where you have come from and where you are going to go. Only the emperor can know this. You have also proved that it is not only difficult but impossible to catch the don. I am just astonished to think as to what would have happened if you had not appeared? Those who were saying that they will confiscate your property are ignorant. They don’t know who you are!

By the way, I want to advise your police and intelligence agencies that they must celebrate your appearance day. Your appearance is nothing less than an official celebration. I just want to say that what has passed in six months is a matter of letting bygones be bygone! The government should feel relieved and thankful that your appearance has saved it a lot of labour, time and resources in locating you. You have also benefitted those ensconced in power.

So say with love: Glory to Param Bir Maharaj’s appearance day! And be least bothered about those who have filed a case against you and some policemen for demanding Rs 15 crore from a builder. Now cases keep getting registered! You accused Anil Deshmukh of extorting Rs 100 crore and others accused you of seeking Rs 15 crore as bribe. Now understand that the greater the status, the greater the allegation! God alone knows the truth..!

And of course, one should really learn from you the art of executing somersault on tamarind leaves. The tamarind leaf is very small and no one can be a better acrobat than the one who can execute a somersault on it. That’s why this Hindi phrase ‘Imli Ke Patti Par Gulati Marna’ which means somersaulting on the tamarind leaf. I remembered this adage because your lawyer stated before the Chandiwal Commission that you do not have any specific evidence regarding the allegation in which you had accused Anil Deshmukh of extorting Rs 100 crore a month. You had levelled this allegation on the suggestion of some officials! Oh wow Param Bir Singh! You were the police commissioner. As you already know that allegations require solid evidence, yet you acted like a child. Initially, you were breathing fire against the former minister, but you executed a reverse somersault when you found yourself on a sticky wicket. You are a great acrobat indeed!

I have just one request to make. Kindly don’t share and teach this magical art to other police officers because what you did has put our police system to shame! Don’t know how many skeletons in the cupboard have tumbled out and are still tumbling out. You are indeed a blessed soul, Param Bir..! 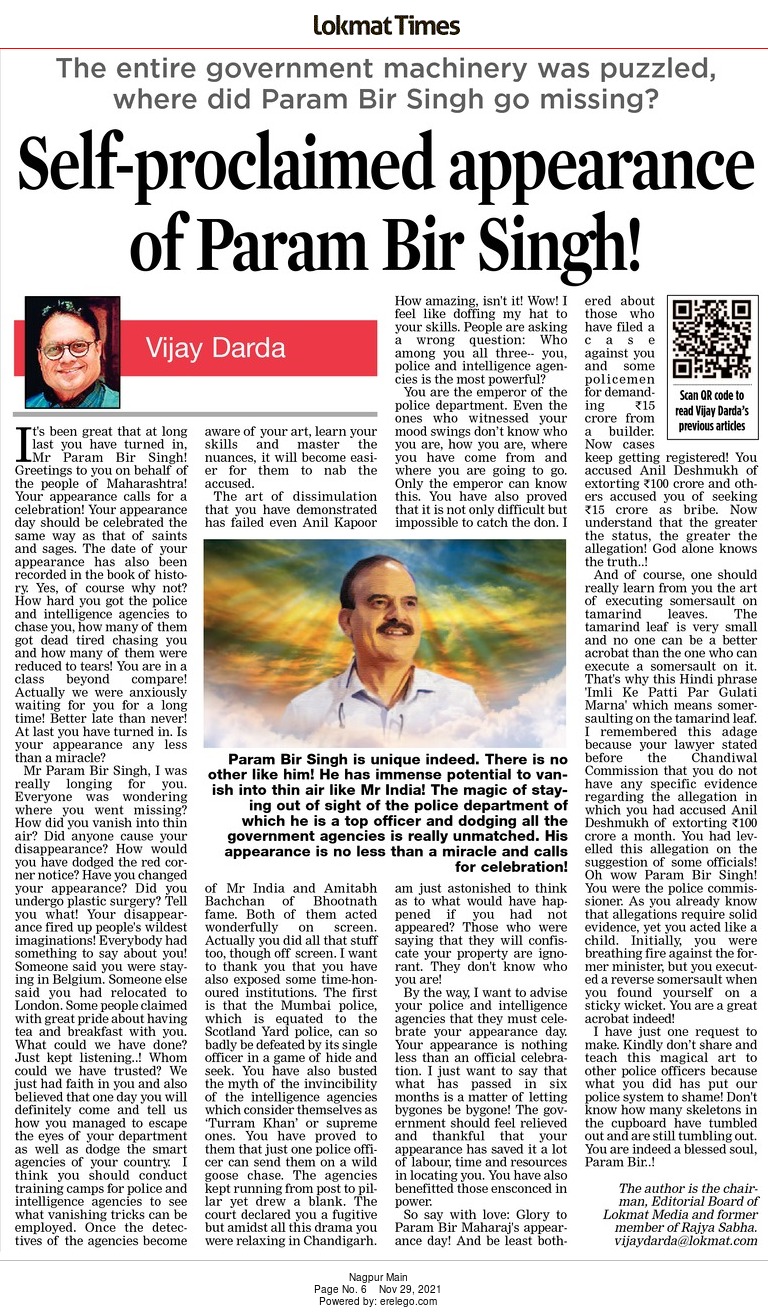 Stop playing with the honour of Maharashtra

Can they really trace the killer of lakhs of people?