The Wardha-Yavatmal-Nanded railway project, which was approved in 2008, is now 13 years old. During this period, the country saw 11 railways ministers but the project is yet to be completed. On Thursday, the chairman of editorial board of Lokmat Media and former member of Rajya Sabha Vijay Darda called on the minister of state for railways Raosaheb Danve and urged him to expedite the project.

The Wardha-Yavatmal-Nanded railway project was approved by the Central government in February 2008, thanks to the consistent follow-up by Vijay Darda with the then railways minister Lalu Prasad Yadav. Accordingly, the project was inaugurated on February 11, 2009 at Yavatmal. The project, which will be a milestone in the development of Yavatmal district, plagued by farmers’ suicides, has been given the status of a special railway project by the ministry of railways. However, despite the special status, the process of land acquisition could not be completed in two years. When this 283-kilometre railway project was approved, the estimated cost was `274.55 crore. Now the project cost has gone up to `3,000 crore. The Central government has 60 per cent share in this project while the remaining 40 per cent is being shared by the Maharashtra government.

The operation of the Yavatmal-Achalpur-Murtizapur Shakuntala Express has been shut down. Killick Nixon, a British company, still owns the narrow-gauge Shakuntala Express. Although the company’s contract has expired, the Indian Railways has not taken it over yet. The Central government will have to pay `35 crore for this. Darda demanded that the government should take it over and set up a museum of Shakuntala Express to promote it for tourism.

Vijay Darda has been consistently following up the project right from the day this new railway line was approved till it was granted a special project status. The project was approved in February 2008 and subsequently inaugurated on February 11, 2009 by the then railways minister Lalu Prasad Yadav. Vijay Darda is leaving no stone unturned to ensure sufficient funds for this project. 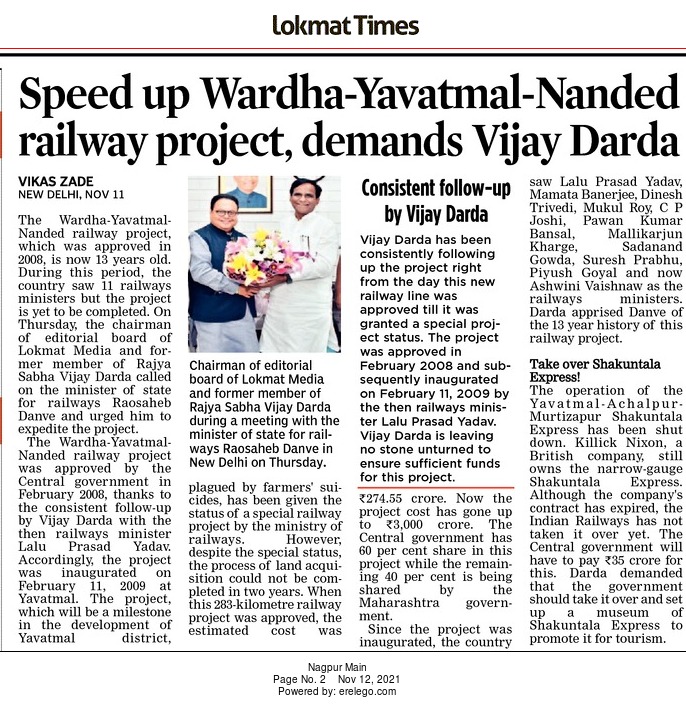