The State government has released its share of `119.51 crore for the financial year 2020-21 for the much awaited 284 km Nanded-Yavatmal-Wardha railway route which is expected to create fast connectivity between these towns of Vidarbha and Marathwada.

According to sources, the State government has disbursed the said amount to the Central Railway.

Chairman of Editorial Board of Lokmat Media and former Rajya Sabha member Vijay Darda in a letter sent to the chief minister of Maharashtra, Uddhav Thackeray on December 12, 2020, had urged the latter to take up the project in a fast lane.

In this connection, the Transport and Parliamentary Affairs Minister of Maharastra Adv Anil Parab sent a letter to Vijay Darda on September 20, 2021, detailing the break up of these funds disbursed to the Central Railway.

With the addition of ` 119.51 crore disbursed to the Central Railway in the current financial year, the total amount of money disbursed for this project has gone up to ` 574.62 crore.

The Central Railway, notwithstanding, has not sought any fund for this project from the State government for the financial year 2021-22

Meanwhile, Anil Parab has assured Vijay Darda that there would be no paucity of funds for the project.

The railway route between Nanded-Yavatmal-Wardha was announced in February 2008. The bhoomipujan for the project was performed by the then Railway Minister Lalu Prasad Yadav in February 2009.

There would be 27 proposed railway stations on this 284 km long project, of which three are old ones.

The land acquisition for this project is nearing completion.

The earth work for the railway route between Wardha and Yavatmal has already been completed.

Chairman of editorial board of Lokmat Media and former member of Rajya Sabha Vijay Darda has been constantly pursuing for the early completion of this project with the Centre and State governments. 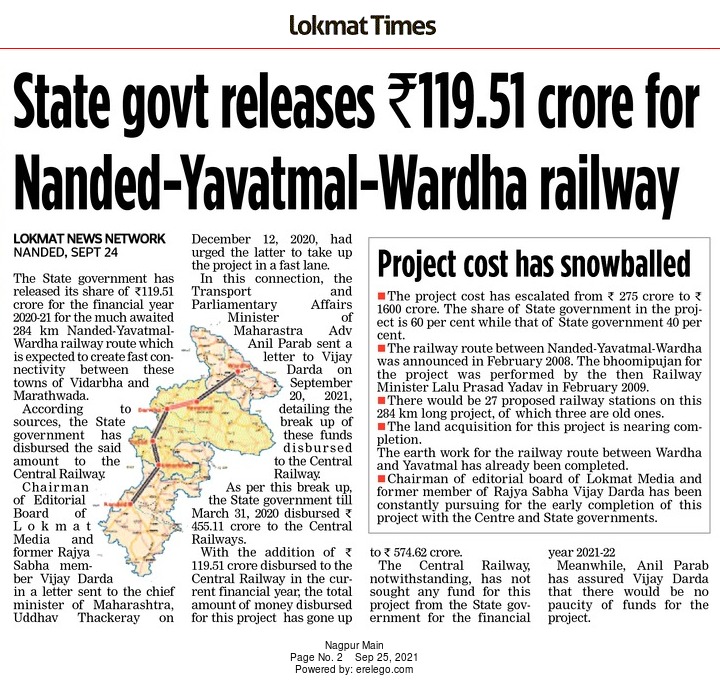