The progress in the `3168 crore Wardha to Nanded (via Yavatmal and Pusad) new railway line project work is being hampered  due to the delay by  Maharashtra government in handing over the balance land  for the work.

Of the total 1,811.73 hectares needed for the project, the Maharashtra government has to expedite acquisition of balance 356.18 hectares revenue land and diversion of 100.59 hectares of forest land. The 284-km new line project was sanctioned in 2008-09 on a cost sharing basis and an expenditure of  ` 1,362 crore has been incurred.

The State government has handed over nearly 1500 acres and balance is awaited.

For Wardha-Yavatmal section (78 km), agencies have been finalised and work has started on the land available.

For Yavatmal-Nanded section (206 km),  agencies for the 79 km work — from Yavatmal to Digras — have been finalised.

Tender for balance 127-km stretch will be initiated only after receiving forest department’s clearance and complete possession of revenue land.

Provision of construction of four Road Over Bridges/ Road Under Bridges is made on the National Highway between Wardha and Nanded.

The details are as under:

(iii) Road Under Bridge (RuB) on National Highway (NH) 222 near Barasgaon village between Yavatmal and Nanded.

(iv) Road Under Bridge (RuB) on National Highway (NH) 361 near Manatha village between Yavatmal and Nanded. This information was given by the railway minister Piyush Goyal in the Lok Sabha on Wednesday.

The ambitious Wardha-Yavatmal-Nanded railway line project, which would prove a boon for the cotton belt of Vidarbha, was the brainchild of the chairman of the editorial board of Lokmat Media and former member of Rajya Sabha Vijay Darda. As a Rajya Sabha MP, he left no stone unturned to materialise this project. It was due to his efforts that the bhoomipujan for this project was performed and funds were allocated in Union Budget over the years. Darda has been striving hard for the early completion of this railway project. 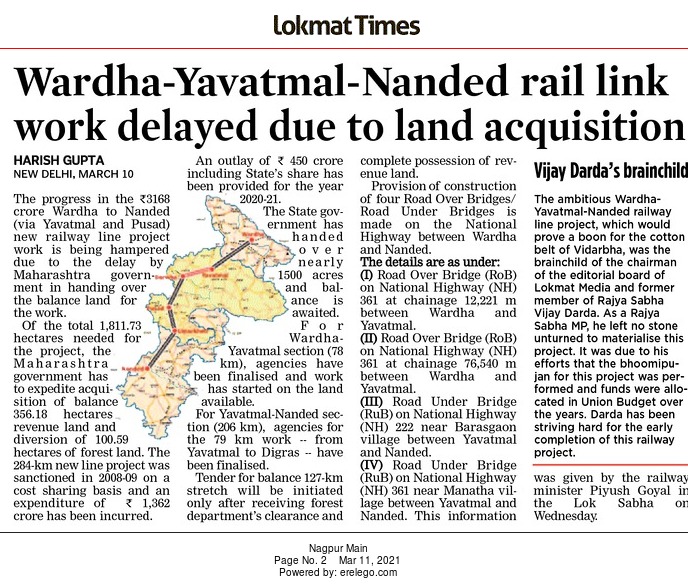 Come on, let us all dig ditches together!