India is among the top 10 countries in the world in terms of drug consumption; substance abuse is ruining the young generation!

The arrest of Aryan Khan, son of film actor Shah Rukh Khan, is the most hot topic of discussion right now after the Narcotics Control Bureau’s raid on Cordelia Cruises’ rave party. It is quite natural. But in reality the story is not just about a rave party and the arrest of some high profile youths. In larger context, this is the story of western lifestyle which is fast trapping our youths into the dark, black world of drugs, sex and debauchery. These drugs are destructive, indeed.

The officials of the Narcotics Control Bureau (NCB) did not even know which celebrities’ children were attending the rave party. They had just received a tip-off that there was going to be a rave party on Cordelia which was organised by Kashiff Khan, managing director of Fashion TV. Kashiff Khan did not turn up but Aryan Khan did and he was arrested. The information I have received from the officials about the rave parties gives me goosebumps. There is a rampant use of ganja, charas, opium, cocaine and some other drugs, including a drug called MDMA which enhances libido. So much so that one can engage in sex for hours and with multiple partners. Just imagine the plight of the girls with whom all this happens, and also think that they are someone’s daughters too! In pursuit of fun, the drugged girls fall prey to the sex monsters. Are they alone to blame for this heinous crime? I believe their parents and families are to blame more for this situation. It is the responsibility of the parents to be aware of what their children are doing. The middle class girls, attracted by the glitz of the world, easily fall prey, and then the spoiled brats of wealthy people get caught in the vortex of debauchery. Bear in mind that wealth doesn’t mean spoiling your children!

There are those poor and hardworking parents who educate their children by working as a manual worker, washing utensils, and from such hardworking families come persons like APJ Abdul Kalam. And then there are parents who, while giving thousands of rupees to their children every day as pocket money, do not ask them what they need so much money for? When they return home late at night, they are not asked where they were. And the result is for all to see. The drug dealers are there at every turn offering glamour on a platter to entice children. That’s why Hollywood and Bollywood stars or their children are often invited to rave parties! A few years back, a video of one such party attended by many celebrities of the film industry created sensation but no action was taken. Why?

When I was studying in Mumbai, I used to see how ganja and charas were openly sold in pan shops near the schools and colleges and they used to display pictures of Lord Shankar. The photo of Lord Shankar was used to indicate the availability of drugs. Such an illegal trade was carried out freely and without any fear of law. Soon after, drunken hippies started coming to India from America, Europe and England. They used to lie on the beach in Goa. There a culture was developed which involved drug trade… there was sex and all such evil stuff. After that, the Russians took over. The business of drugs started spreading all over the country. There is no concrete information as to the size of the illegal drug economy in India. The probable figure for the illicit drug industry would be approximately `2 lakh crore but to me the situation looks even grim.

The biggest mafia in the world is the drug mafia, the second being the arms mafia. Both are interlinked and they are connected with terrorist organisations. India is one of the 10 major countries in the world in terms of drug trade. Not only is there a lot of consumption of drugs in India, its geographical location also makes it a major distribution centre. About 40 per cent of the drugs produced the world over come from the opium poppy grown in Afghanistan. It is smuggled into India and processed. Then the finished drugs are sent to different parts of the world. Unfortunately, we do not have stringent laws on drugs like Singapore, where punishment for keeping drugs is death. We should have a similar system here too. We have to fight against drug menace at the administrative as well as the societal level. It is our awareness that can save our children from getting sucked into the dark world of drug addiction.

I was talking to NCB director Sameer Wankhede the other day. I told him that you are the son of a farmer, you come from Vidarbha which is the land of freedom. You have got a chance, and the values instilled by your parents are with you, so you should not spare the drug dealers. He promised me that he would smash the drug cartel. I am glad that Sameer is doing it too. I am of the view that politicians should extend their unconditional support to the officers like Sameer. Given the family values of Prime Minister Narendra Modi and chief minister Uddhav Thackeray, I am confident that they will definitely wipe out the drug network.

Before I conclude
I recently talked to an internationally renowned doctor. He said before performing surgery, he asks the patients whether they have any addiction or consume drugs. An astonishing 80 per cent of the youths admit that they use some or the other kind of drug! So think… Is your child among the drug addicts too? 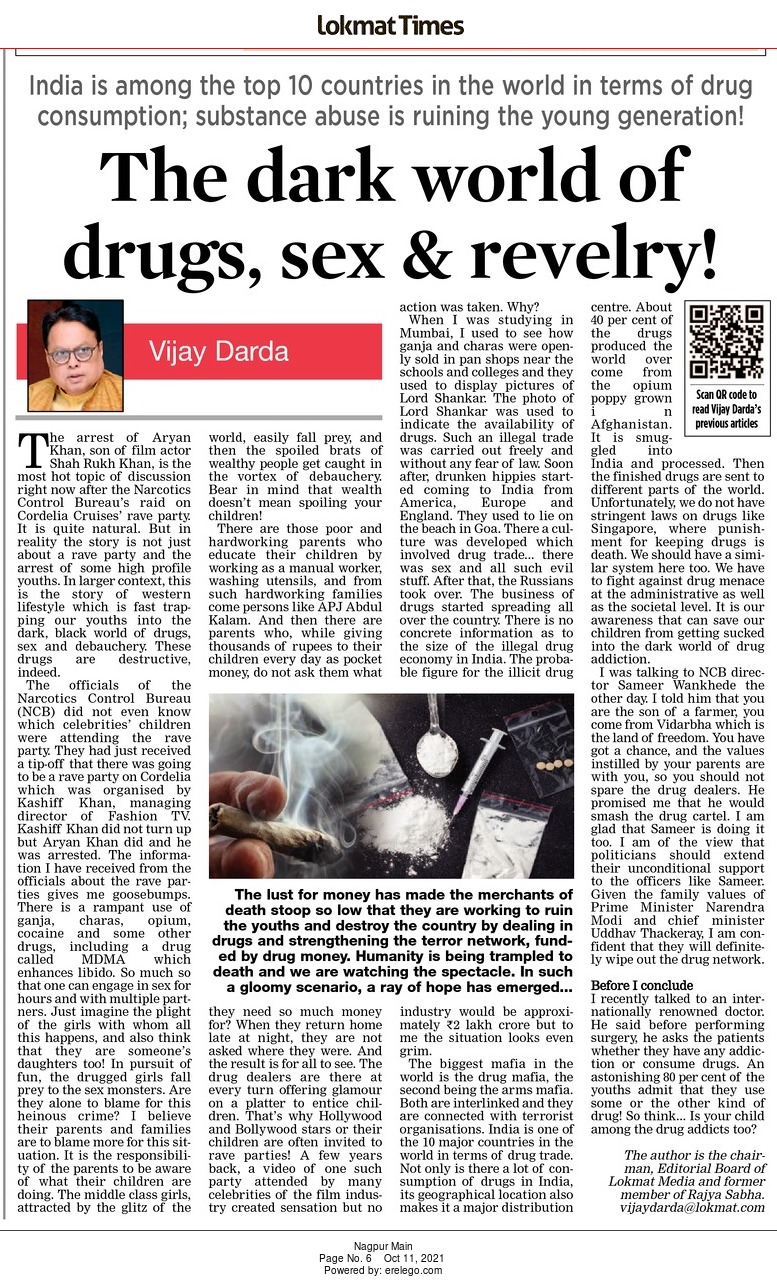 Time to rein in rapacious hospitals