There must be dignity in life and death

Bodies washed up on the banks of Ganges and those buried in sand, and deaths due to oxygen shortage in Goa have shamed the nation.

Kitna hai badnaseeb
Zafar dafn ke liye,
Do gaz zameen bhi na mili
ku-e-yaar mein!
(How unfortunate am I that I could not get two yards of land for burial).

This ghazal was penned by India’s last Mughal emperor Bahadur Shah Zafar while he was imprisoned in Rangoon prison. Really, how unfortunate it is for someone not to get a little space for burial in his own land. In the present situation, I find this ghazal of Bahadur Shah Zafar quite relevant.

Both in life and death, there must be dignity. This is the first requisite in a democracy. To be born in this world honourably and to exit this world equally honourably, no status is required nor is it related to poverty or wealth. Someone has to be a performer or someone has to merge with the elements. Both are respectful. The king and the poor go the same way. But when I read, saw and heard the shocking news that hundreds of corpses were found floating in the Ganges and scores of corpses were buried in the sand, my mind started asking as to how such a thing can even happen? And this is happening in my India which is on its way to become world guru! It is happening in India which is set to become a powerful nation. There is a huge difference between India becoming powerful and China or Russia becoming powerful. A democratic India becoming powerful would mean every person becoming powerful.

Towards the end of life, one most important thing is honour and dignity. Be it a small child or an adult, one who does not get respect or honour is dead though he may be breathing. Be it at home, in the society or in the country does not matter. My Babuji freedom fighter Shri Jawaharlalji Darda used to say that the country gives respect. It does not discriminate. Once I returned from school and was crying. Babuji asked me why are you crying? I said I was insulted in class today. My teacher harassed and insulted me using casteist words. Is it my fault that I was born in a Marwari Jain family? Having heard me patiently, he said “Vijay, I respect your tears. I respect them because every person has the right to live with dignity.” And this is what my Constitution has given me. Our fight for independence was also the fight for self respect. Otherwise we would have got two rotis anywhere. Today I am distressed because my honour and dignity is not being safeguarded. I did not receive any medicines or injections, nor was my honour protected. I know poverty is a curse but not as big a curse as to deny dignity to the people.

Every person performs the last rites of his family member to the best of his ability. According to Hindu customs, the mortal remains are consigned to flames, the Muslims read the Fateha and the Christian brethren read the lines from the Bible ‘In the name of God’ and respectfully bury the body. How ironic that people are dumping bodies of their dead family members into the river or burying them in the sand because there is a shortage of wood for cremation. There is no place in the crematorium and the prices of wood are skyrocketing. There is a shortage of space in the cemeteries. I had read stories of such things happening during Nazi regime, but I am living in a democracy today. It was said and I believe it too that India will grow in strength. When I see Indians queued up in front of the American Embassy for visa, I start thinking about the day when Americans will queue up for obtaining India’s visa! This very thought would make me feel very proud, but what is happening in our India today?

Let me make one thing clear that whenever I write something, I don’t wear any party’s spectacles. I write only from the perspective of humanity, self respect and reverence for living and the right to live. In the first wave of Covid, we saw migrant labourers starving. While the news of their children’s death was received with great shock, now over 100 people have died of oxygen shortage in five days in Goa! Initially, we read news that due to lack of oxygen, many people died in Delhi or Palghar or Nagpur or some places in Punjab. Our small state of Goa is famous the world over. It is very unfortunate that people died due to lack of oxygen there. It happened one day, it happened the second day, and the same incident happened on the third, fourth and fifth day; it shows utter negligence. After all, why was the administration not prepared in advance? There is no coordination between the chief minister Pramod Sawant and the health minister Vishwajit Rane. Rane is threatening Sawant! Just tell me, who should be punished and how?

Has man become so helpless, so hapless, so crippled? Neither can he speak, nor raise his voice, nor express himself? Is it his destiny to only watch helplessly? Is this all that he is left with?

Now the people who are recovering from corona are facing strange side effects; there is a strange disease called mucormycosis affecting the eyes. Its medicines have disappeared from the market. Four injections are to be given daily for 40 days. An injection costs something between Rs 7,000 and Rs 8,000. Where will the common man get so much money from for treatment? That’s why I say that the second wave of corona is not over yet. The pandemic continues unabated. Hence don’t be careless. You have to protect yourself. You have to follow the corona appropriate guidelines like putting on a mask, observing safe distancing norms and cleaning hands frequently. My only expectation from the government is that it should prepare itself for the third wave of corona, and seek help of those who have resources and facilities and respectfully save the lives of the people. And those whose life could not be saved should at least be given a dignified farewell! 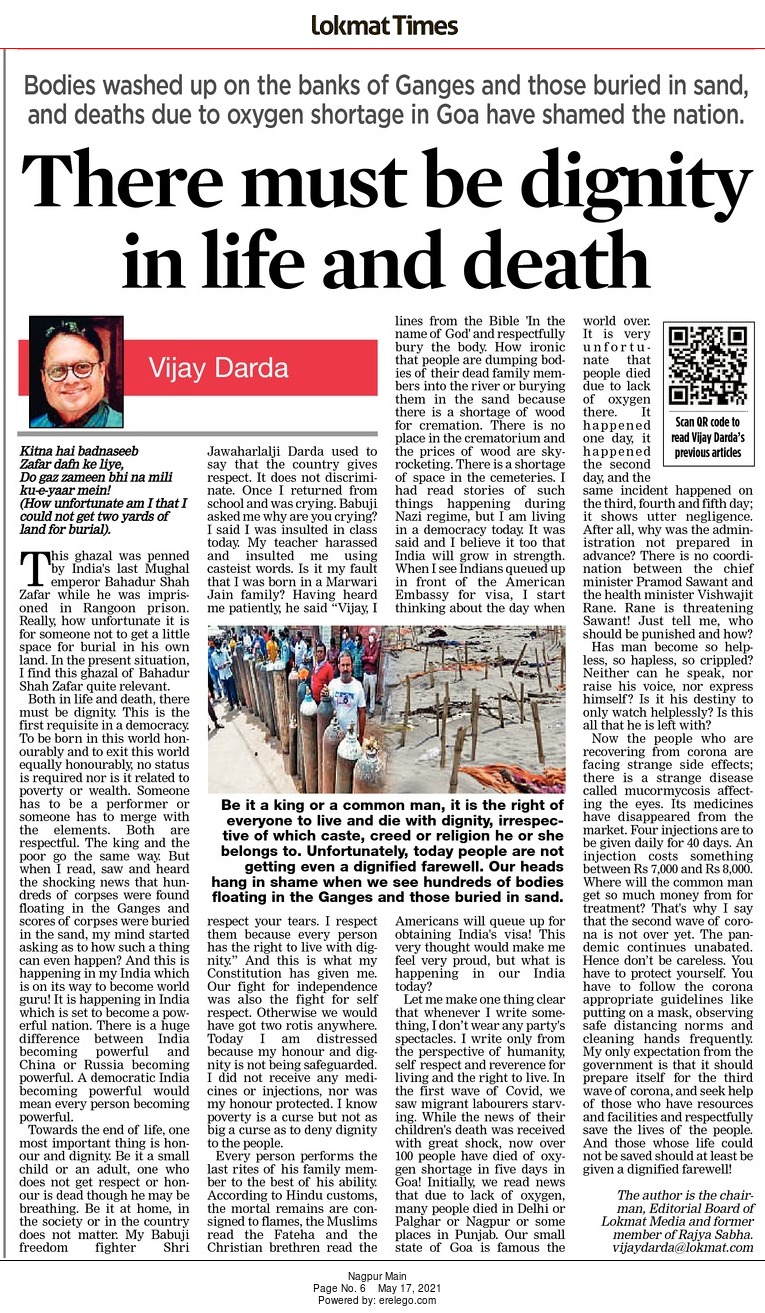 Govt should provide free vaccine to everyone

Why are children’s lives so cheap?