There need be no confusion on effectiveness of vaccine

Vaccination drive is a turning point in the crusade against Covid-19. Yet, self-protection is the key.

The world’s largest vaccination campaign to prevent Corona has started in India. In the meantime, some confusion too prevails and surely it needs to be resolved. Keep in mind that vaccination is an important weapon against Corona, but protecting yourself is still the most important thing.

At last we have got the vaccine that we had all been waiting for several months to protect ourselves against the Coronavirus pandemic. In two days, about 2.25 lakh doctors, health workers and Corona warriors have been inoculated in India. So far, no specific side effects have been reported, but the news coming from Norway has made everyone worried. The Pfizer vaccine is being administered there. Some 33,000 people have been vaccinated, but 23 of them lost their lives and all of them were more than 80 years old. They were more vulnerable than before and lived mostly in nursing homes. However, it has not been verified yet whether their deaths were caused by the side effects of the vaccine.

The Norway government has ordered an inquiry. Pfizer also has sought permission in India, the success rate of which is being reported to be up to 98 per cent, but at present India has not given the approval. Apart from this, the impact of the Moderna vaccine by the UK is around 95 per cent, Russia’s Sputnik V vaccine is 90 per cent and the effect of Chinese vaccine Sinovac is around 50 per cent. Russia and China are claiming a lot more than this, but their claim is not strong. However, there is no possibility of their use in India as we have a vaccine which has been manufactured in the country. Covaxin is a completely indigenous vaccine made by Bharat Biotech. The pharma major’s past record is very good.

The second vaccine is Covishield which is the Indian version of Oxford-AstraZeneca and is being produced by the Serum Institute of India. There is no question of doubt on Indian companies because India occupies the highest slot in the world in terms of vaccination. We have controlled many diseases on our own and have also benefitted the world. You will be happy to know that 60 per cent of the worldwide vaccine is produced in India. The largest vaccination programme runs in India. Every year, 5.5 crore women and children are administered 39 crore vaccine doses.

Therefore, I feel that the vaccination campaign in India will be completely successful. I want to congratulate those scientists who have developed the vaccine. These scientists have indeed brought glory to India. I commend the courage and spirit of the volunteers who participated in the first, second and third phase trials, bypassing their own health to serve humanity. The third phase is still going on and it is expected that its figures will be revealed in February. In the first and second phase, there was no major adverse effect, that’s why the Drug Controller General of India, Dr. V.G. Somani, gave the emergency approval to the vaccine.

Some voices of protests have emerged which question as to whether it was appropriate to allow the use of the vaccine without completing the third stage of the test. Experts have replied to this question and have stated that the vaccine to be completely safe. Meanwhile, 49 scientists and doctors of the country have written an open letter and asked people not to fall into any confusion. The two vaccines Covaxin and Covishield — allowed in India — are completely safe. We should trust the words of the scientists.

The World Health Organisation has also lauded India’s vaccination campaign. I believe that curiosity is the mother of knowledge. Therefore, if any question arises, then its answer should be available immediately and authentically so that there is no confusion among the common man. Vaccination against Corona can be successful only when there is no confusion about the vaccine in one’s mind. Now, the most crucial question related to this is whether we can completely eliminate Corona through vaccination only? Experts are clearly saying that the vaccine is helpful in reducing the threat, but if the Corona is to be eliminated, then we have to pay more attention to our protection for a few more months and only then we will be able to break the Corona chain. The Corona pandemic will not be wiped out until its chain is completely finished. It is unfortunate that India is lagging behind in terms of protection. The vigilant people wear masks all the time, wash their hands, keep sanitizers with them and always use them, but most people still remain careless.

The government can issue guidelines. It can tell people what to do and what not to do, but people have to scrupulously adhere to the guidelines on their own! I am distressed to see that many people still keep the mask on the chin instead of putting it on the mouth and nose. You will be surprised to know that people in Maharashtra have paid more than Rs 5 crore as fine for not wearing masks but still are not learning a lesson! In such a situation, how will the Corona chain break? That is why I request you to take care of yourself. Do not leave the house without a mask. Take special care of cleanliness. This struggle against Corona is just a long-drawn-out battle.

The author is the chairman, Editorial Board of Lokmat Media and former member of Rajya Sabha. 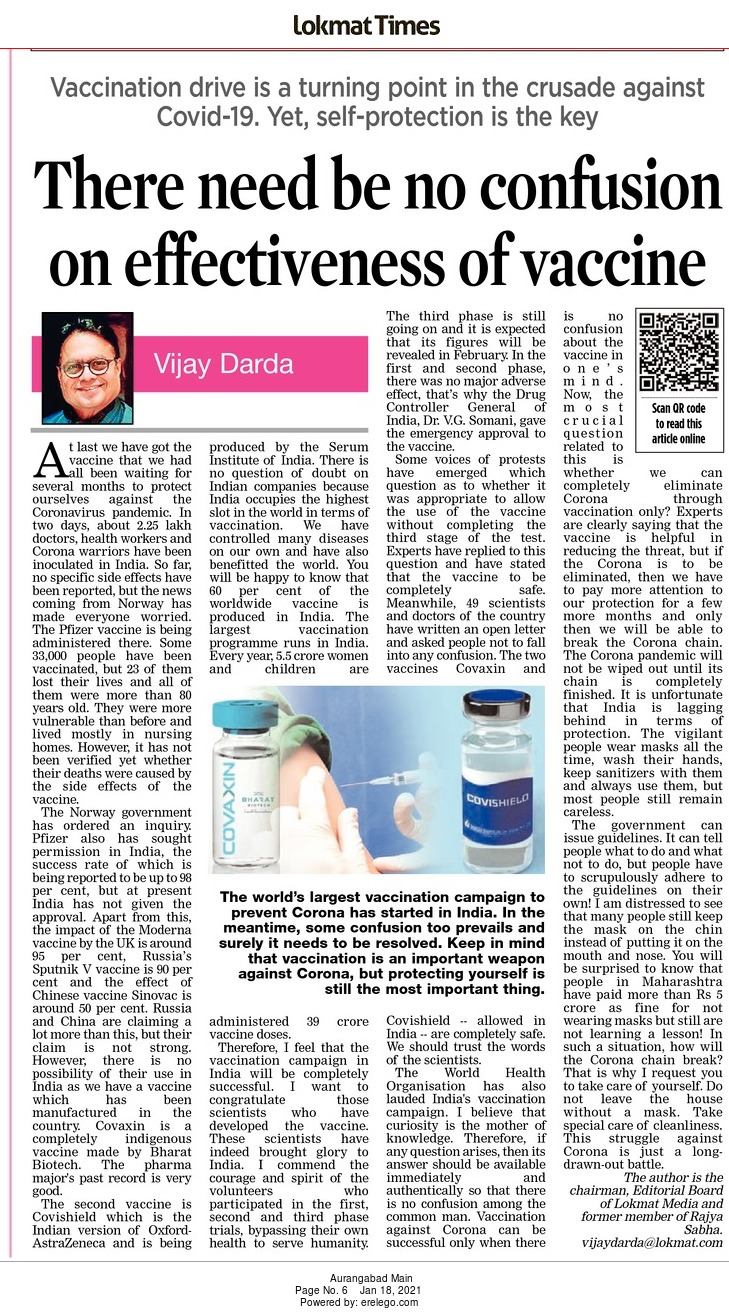 Hate is no recipe for progress