Those beats of heart and pat on the cheek!

A noble human being, Dilip Kumar was an apostle of peace and an unmatched ‘Kohinoor’ of acting

Dilip Kumar epitomised two personalities. One was Dilip Kumar and the other Yusuf Khan. Dilip Kumar was completely devoted to his acting career as well as direction and Yusuf Khan was committed to the service of humanity and the rights of the people. He was a noble soul who shared love, affection and opened his heart to the powerless and hugged those heart-broken. His heart beat for the country. When the Kargil war broke out, he got furious and said, “This is unacceptable. It has stabbed us in the back in the name of friendship.” Yusuf Khan was very sensitive towards the poor and the needy. He was far away from the narrow consideration of caste, creed and religion. He held Ram and Rahim both in equally high esteem. He was not averse to going to the temple. He had no hesitation to help build a temple. He believed in the equality of all religions. He was very spiritual. He would often say, “Even a dry leaf does not fall on the ground without the will of the Almighty.”

This is not a hearsay. This is my personal experience. I had been close to him, so I got an opportunity to know and understand him deeply. Let me give you an example of how deeply he felt for the country. The film ‘Upkar’ was released. There is a song in the film: ‘Mere desh ki dharti sona ugle, ugle heere moti…’ At that time, we were having dinner with him one day. He started saying that he felt like kissing Manoj Kumar. “The song gave me a hair-raising experience!” He always stood by the country, irrespective of circumstances.

Once, the World Advertising Congress was being organised in Pakistan. Industrialist Harish Mahindra was the chairman of the Congress. At that time, Pakistan showed Kashmir in its map. It was decided that Dilip Kumar should be sent there to speak. He went there. However, when things didn’t work out, we also did not go to Pakistan. Very few people know that Dilip Saheb went to jail during the freedom struggle. When he was in Pune, he used to work as a sandwich maker in the military canteen. One day, he gave a speech in support of the freedom struggle at a public meeting. India was ruled by the British then. Immediately, the police arrested him. Later, he was released by a major who was a lover of sandwiches.

I was introduced to Dilip Kumar by my Babuji freedom fighter Jawaharlal Darda and NKP Salve. It all started in 1971 when I went to invite him to my wedding. In a teasing tone, he asked, “Barkhurdar, will you be able to bear the burden of marriage?” I didn’t get the point. He said, “Look gentleman, this is a very lovely bond and it holds great importance. No other bond has the power to change you from within, but its purity is very important.” He then extended his best wishes saying he won’t be able to make it due to his shooting schedule. The second meeting took place when I went to his house to interview him. Even before the interview, he got busy thinking over one of his films. After some time, he said he will not be able to spare time for the interview and apologised for it. The interview did not materialise but I was very impressed by the hospitality in his house.

Dilip Kumar was invited as a guest for the Kabaddi competition in Yavatmal in 1980. That was 25th of December when he reached Yavatmal. He came to Yavatmal by car from Nagpur and I was impressed by his simplicity. He behaved like a normal person, no stardom. He gave a great speech and got down to the Kabaddi field. He said, “I belong to the soil and I am related to the soil. I too play Kabaddi well.” You can easily guess what the atmosphere must have been like that day! After the event, he had meals at our home. While my mother was serving food, he asked her to have lunch together. With Babuji on one side and Bai (my mother) on the other, he enjoyed the lunch and chatted a lot. He blessed Jyotsna and said apologetically, “I could not come to your wedding.”

When he came to Delhi after being nominated as a member of Rajya Sabha, a flat was allotted. He told me that he does not even feel like living there. It was allotted in my name too. Another bungalow at 7, Gurudwara Rakabganj Road was allotted in the name of Mukesh Patel. As he was living alone, he told him to come along. One day we invited Dilip Kumar there for lunch. On seeing the bungalow, he said he too would like to stay here. Then all three of us started living there together. Those were fabulous days indeed. Whenever we would spare some time to get together, Dilip Kumar would become an all-rounder as soon as he would get into the mood of singing. He was a good singer too! One evening, I asked him what his opinion was about Raj Kapoor Saheb and Dev Anand Saheb? In a cheeky manner, he asked why I did not mention his name with them and said, “all three of us are good players in our fields. All three have the ability to cast a binding spell.”

When we were living in Delhi, I realised how much Saira Banu loved her husband. She used to take full care even though she was away in Mumbai. Calling us from time to time, she would ask if Saheb had eaten or not, taken medicine or not? Whenever she would call, Dilip Saheb would silently say, “Tell her I have had my food and taken medicine too.” As Saira Banu knew it all, she would tell me to take care of him as he did not take care of himself. His dedication towards parents, brothers and friends was amazing; he used to handle and respect every relationship. There was a huge age gap between Dilip Saheb and me but he never let me realise it. I can never forget the feeling of him lovingly stroking my cheeks or giving me a warm hug while stepping out of Parliament. When he was selected and invited to receive the Lokmat Maharashtrian of the Year Lifetime Achievement Award, he told Saira ji that he wanted to attend the programme at any cost. So Saira ji brought him and Dilip Saheb shared a lot of love during the programme!

(Before burial
Check the pulse sir!
The artist is great
He may still be in character!) 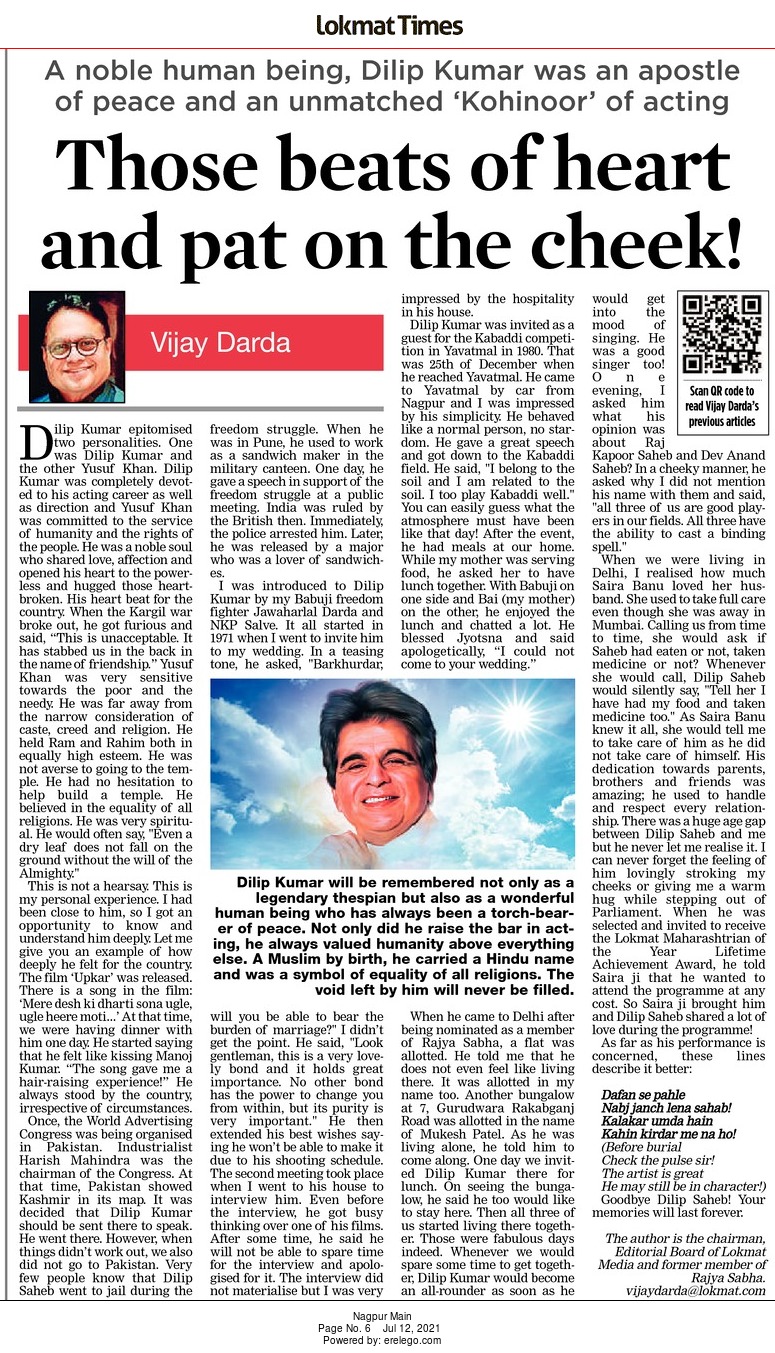